Till Death GOO Us Part… The Ghost of Maude Flanders 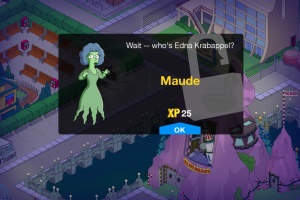 So… EA has given us so many goodies this Halloween.  Included in this is The Ghost of Maude Flanders FOR FREE!  Now that’s spooky!  If you want to see the walkthrough stuff for Maude, click here.  This post is about where the heck this character comes from.

So if you didn’t know already, Maude is Ned’s deceased wife.  Obviously for Halloween, EA decided to give us her ghost to fit in with all the other ghoulies.  I thought to explain her ghost, we’d go all the way back to her death.  This happened in Season 11, Episode 14 (Alone again… Natura-Diddily).

The Simpsons family goes hiking in the Springfield Nature Preserve and find out that a NASCAResque race track has been built smack dab in the middle of the forest.

When Clay Babcock’s Number 1 Vehicle ruins their picnic (why they opted for the center of the track, only they know), they end up with free tickets to the next big race.

At the race, FANDEMONIUM shows up to give fans t-shirts from the ever popular T-shirt cannon.  Homer of course taunts the girls and gets a volley of 6 shirts sent towards him… Oh look, a bobby pin…

That’s right, at the last minute Homer ducks to pick up a bobby pin and Maude Flanders gets hit with the shirts, is thrown off the bleachers and falls to her death.

At the funeral in the next scene, Reverend Lovejoy basically sums up everything you really need to know about Maude.

“In many ways, Maude Flanders was a supporting player in our lives.  She didn’t grab our attention with memorable catchphrases or comical accents (Ayyy!/Yarr/Oh glayven, WHY Glayven), but whether you noticed her or not… Maude… was always there and we thought she always would be.”

Poor Maude.  Well, the best part about The Simpsons is death doesn’t mean the end of a character, especially when there’s a Halloween Episode every year!

Maude’s Ghost appears in Treehouse of Horror XIII in the opening sequence.  The Simpsons family convinces Ned to participate in a seance to contact the ghost of his dead wife.  Bart tries to prank them while dressed in drag (hilarious!)

Of course, the real ghost of Maude Flanders shows up and ends up seeming more like a demon.  She introduces the “tales that will shatter your spine and boil your blood.”

So there you have it.  Maude’s ghost is from a 3 minute introduction to a Treehouse of Horror Special.  Pretty much true to form for EA.  I wonder how many of their techies wanted to bring her in to the game with this cameo as the Devil’s wife in TOH XXII? 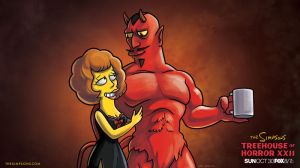 Anywho, I am pretty jazzed to have another lady in my Springfield even if she is a specter.  Here are the tasks for Maude in TSTO. 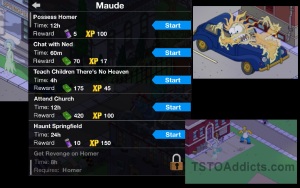 Well, that about sums up this post.  You stay classy and keep on ghostbusting everyone.

All original art and content © Up All Night, LLC and TSTOAddicts.com All Screen Shots of Game Graphics & Dialogue and Game Graphics from files ™ and © EA, Gracie Films and FOX. The Simpsons ™ and © FOX and its related entities. All rights reserved.