Welcome to another edition of the Mad Men of Springfield here at TSTO Addicts. We will be going into depth on the history and background of the male species running around our lil towns as well as those not yet in the game.

In this weeks episode, Mad Men has been completely hijacked by the Wookiee. The Lady Addicts do a great job of covering the male angle but I figured I’d give them a break.  I also just really love this character.  Today, I am going to talk about a new character brought into our games via Level 42. The hobo animator with a house of gold, owner of one rocket car and willing to shine shoes in a tuxedo.

I am referring to none other than Chester J. Lampwick.

So how did he end up in our games? Where in the Simpsons TV world did he appear? Why is he so terribly unkempt and homelessy? Well let’s take a look at the episode where we first met him.

Season 7, Episode 18: The Day the Violence Died (NOTE: He was voiced by Kirk Douglas, how cool is that?)

This whole episode begins with The Simpsons attending a celebration in honor of Itchy & Scratchy’s 75th Anniversary.  Bart runs into Chester in the Bumtown portion of Springfield courtesy of a poorly planned parade route for the parade.

Chester claims he invented the whole concept of cartoon violence.  Before he came along, cartoon animals just played the ukulele.  He even carries around an old film of the very first Itchy cartoon he ever made.  In it, Itchy washes and rings an Irishman and cuts off the head of Teddy Roosevelt.  The credits show Chester as the creator, director, cellu-lamino artist, electricity engineer and ethnographer of the film.  Heck, when Bart and Milhouse play it at Springfield Elementary (where else would you find a 90-year-old projector?), Chester even plays the score of the film by memory.  Unfortunately the school’s projector destroys the film.

Out of pity (and because Bart shelters almost everyone), Bart lets Lampwick squat in his basement.  Of course, the Olmec Head is there for all you nostalgic 2013 Holiday event peeps.  Homer and Marge are none too thrilled with the arrangement so Bart has to figure something else out. 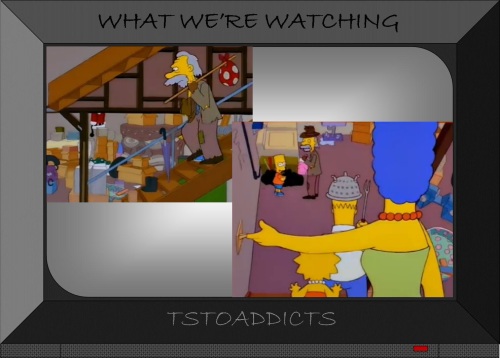 Bart has Chester appeal to Roger Myers Jr. for royalties but they are thrown out on their bottoms.  Guess Rog didn’t like the sum of 800 billion dollars that Lampwick wanted.  If at first you don’t succeed, try try again so the duo head to Attorney Lionel Hutz.  I&S Studios bring out the big guns in the court case ( i.e. the Blue Haired Lawyer) but Bart saves the day by remembering he saw an original animation cell of Itchy at the Android’s Dungeon.  The drawing was signed by Chester and wins the case.  Woo hoo!  Lampwick is a billionaire!  Boohoo… I&S Studios is bankrupt. 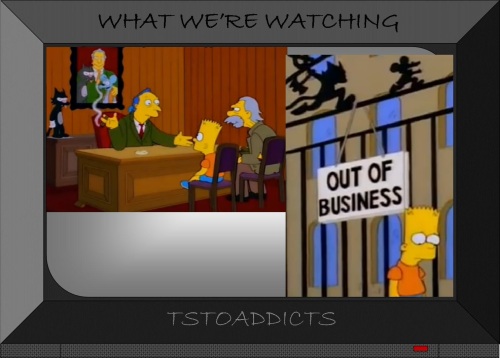 With the money, Chester repays money he owes the Simpson family for legal fees and is off to buy the one thing he dreamed about the entire time he was in the gutter… a solid gold house.  We see later that he actually did buy it too!

Other fun facts: Grampa paid Chester a plate of corn muffins in 1947 to paint his chicken coop but Chester didn’t do it on account that the muffins were lousy. The ensuing fight between the two old men is priceless.  Chester also didn’t paint Krusty’s fence after being paid a couple of blintzes because those were also terrible.

This whole story is actually quite interesting because it mirrors a real one in animation history.  Most people in the world are familiar with Walt Disney and the empire he grew from a simple mouse drawn on paper.  Most folks however have not heard of Ub Iwerks.  Iwerks created Oswald the Lucky Rabbit and co-created Mickey Mouse.  Walt and Ub had a falling out over credit for animation. Disney went on to be a household name, not so much for the other creator of the most popular mouse in history.  Ub Iwerks continued animating but faded into obscurity.  Sound anything like the story in this episode?

So Chester J. Lampwick might actually be a criticism of another animation studio or he may just be a bum who finally got his comeuppance.  The only question left is does he appear again in the Simpsons TV Series? Are there other characters that he seems to resemble? Let’s see what we can see.

In “Sweets and Sour Marge” (S13:E8), Chester is part of the world’s largest human pyramid attempt along with a ton of other characters.  He also was in the angry mob in The Simpsons Movie.

There are bums who appear on occassion in episodes who closely resembles Mr. Lampwick.  Just check out “The Parent Rap” (S13:E2) and the “Boys of Bummer” (S18:E18).  In the first, Bart and Milhouse go joyriding in Wiggum’s police car.  During this, they drive through a ceremony giving trophies to promoting young athletes.  The table of trophies is hit and go flying but a bum who looks a lot like Lampwick has one land in his hands.  “Finally… some recognition.”  Sounds like something our guy would say.  The same bum appears in the other episode I mentioned, but I’m not quite sure it’s our guy.

The closest bum to resemble our new TSTO friend is in “Old Yeller Belly” (S14:E19).  This one really does look like Lampwick sleeping at the Springfield Mission although it’s a super fast pan and he’s not seen again.  Might just be a case of hobos all looking the same or animators being lazy or both. 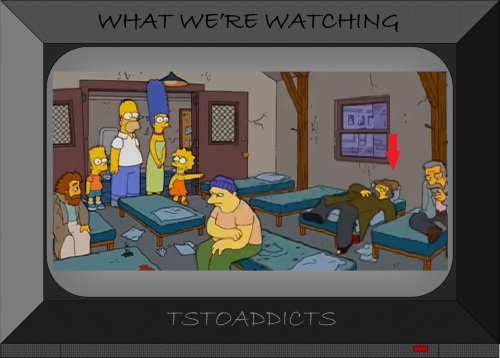 I must be honest that I never considered any of these bums to be him until TSTO told us he’d lost all his money.  Anywho… moving on.

Mr. Lampwick becomes available in TSTO when you purchase the Rocket Car for 120 donuts.  The car is a decoration but adds a 2% bonus to the XP and cash earning in your town.  Additionally, EA also surprised tappers with a 4 day Gil deal on 26 June 2014 to purchase Lampwick’s Solid Gold House.  This was much more expensive at 250 donuts but the house did add a 30 minute task for Lampwick and earns $135/15 XP every 4 hours for “Gold Panning in the Bathtub”.  Chester’s questline is hilarious.  He also has some great outdoor animations.

There you have it. Another crazy character brought into our silly lil game. Leave it to a hobo to try and make you part with your hard-earned money.  So did you get him? Is he homeless still or does he have a house made of precious metal? What do you think of his tasks? Do you have a favorite? Did you know about Ub Iwerks? Sound off in the comments below.