Just when you think you’re safe for the night..EA pulls you back in!  It’s the 4th of July in Springfield!  We certainly didn’t think EA would forget about Independence Day in Springfield but honestly, I thought this would hit tomorrow (Wednesday)…so my apologies this is a bit late.  Was settled in for the night watching USA soccer! 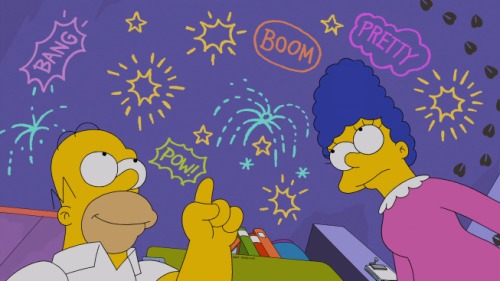 Anywho…we’ve got ourselves a little 4th of July update, inside Tap Ball!

As always we’ll be back with more info once we go through it, but for now know that it should auto-start for you with some dialogue from Homer…

As it says above, once you start up your game you’ll see some dialogue from Homer.  This starts the Monetization Liberation questline.  (we’ll cover this in full in a turbo tap post tomorrow)….

Homer: It’s the 4th of July!  Time to grab my secret stash of illegal fireworks from their hiding place!
Lisa: You kept a box of fireworks hidden behind the basement furnace?
Homer: Yes, but, see, I put this heavy can of gasoline on top of the box, so that if any ka-booms happened, the explodey parts wouldn’t be able to get out.  Safe!
Lisa: You’re a nuclear safety engineer, right?
Homer: …..*Long Pause*  Yes.
Lisa: You had to think about that a long time.
Homer: I did.  Anyway, time to “inspect” some of these little guys in the backyard!  Ka-boom!
Make Homer “Safety Inspect” Fireworks- 4hrs, Earns $175, 45xp

Gil: Ol’ Gil has returned to Springfield with something both amazing and physics-defying.  With the power of my non-patented snake oiled time machine, I give you everyone’s eh…”favorite” Commander-In-Chief!
Nixon: …shall resign the Presidency effective at noon tomorrow.  Vice President Ford will be sworn in as President–WHAT THE– WHAT IS THIS PLACE?  WHERE DID THE OVAL OFFICE GO?  AND WHY IS EVERYONE GLARING AND HISSING AT DICK NIXON?
Lisa: It must be that time of year again.  Another ex-President has somehow appeared in Springfield.  President Nixon, welcome to the year 2015.  It’s an honor to…that is to say, it’s nice to… er, it’s actually not that great to meet you.
Nixon: WHY DO YOU SAY THAT?  TELL ME, AND BE QUICK ABOUT IT– IS NIXON REMEMBERED AS AMERICA’S MOST ABHORRENT POLITICAL SCOUNDREL?
Lisa: Well, uh…kinda.
Nixon: AND ALL BLAME FOR THE SCANDAL THAT ENDED MY PRESIDENCY RESTS ON DICK NIXON’S SHOULDERS?
Lisa: Pretty much.
Nixon: Then the plan worked.  And America is safe.  That God Almighty for that.
Lisa: Wait…plan? What plan?
Nixon: DICK NIXON HAS SAID TOO MUCH!  DICK NIXON WILL SAY NO MORE!
Gil: What plan is former President Nixon referring to?  What’s the real story behind America’s worst political scandal?  And what do George Washington and Abraham Lincoln think of our most reviled President?  Build the Scandal-gate Hotel to find out!

You’ll then be offered the newest Gil Deal…President Nixon and the Scandal-gate Hotel for 150 Donuts: 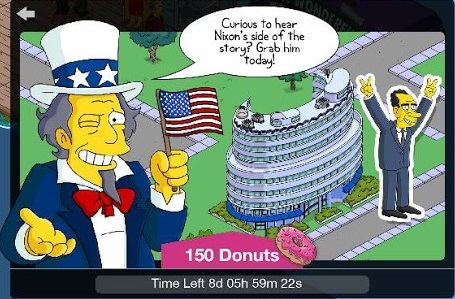 If you pass on the deal…

Gil: What kind of patriot doesn’t purchase Richard Nixon on the Fourth of July?  He’s America’s forty-fourth most beloved President!  To be honest, I get it.  I really do.  I tried to get ANYONE but Nixon.  Called up Jefferson, Grant, both Roosevelts….But their royalty fees are too high.  It’s hard to get the prestigious ones.  They’re not as desperate.  I did manage to sell six Nixons, at least.  I hope ol’ Gil can live off that income for an entire year…

And now for the new goodies in our stores…

First the NEW stuff, for those who have been around for a while…

(honestly there’s not much that’s NEW)…

Patriotic Box of Fireworks- $5,600.  Shoots off Fireworks when tapped.  Can have as many as you want.

Hover-Copter- 70 Donuts.  From Halloween 2014…it was free then.  Honestly save your donuts, it’s not worth it.  Here’s a review of what it does..

Recap of returning 4th of July items Should I Buy Post here.  (Pinwheel, Box of Fireworks, All American Apu, Statue of Liberty Lisa)

If the Rockets Red Glare Redux starts up for you you can find the questline here..

And there you have it my friends!  The basic details of the 2015 4th of July Update!

We’ll be back over the next couple of days with walkthroughs, should I buys and more…in-between the Tap Ball coverage of course!