Where Did THAT Come From – Pin Pal Apu

So with the Tap Ball Event, all sorts of new stuff has appeared in our games. we got new skins for characters and one of them was Pin Pal Apu.  But what does our favorite Hindu in a bowling shirt have to do with the Best. Show. Ever.?  When and where did he actually appear? Let’s chalk up our paws, grab our bowling balls and find out in the Simpsons TV Series.

You know… this whole Tap Ball event is pretty interesting. EA pulled items from all over the Best. Show. Ever. for it. Lots of great stuff but it was pretty hard for me to contain my excitement with this free skin. Not only did we get it early, it’s from an amazing episode.

When Moe closes early due to slow business, him and Homer are off to Barney’s Bowlarama to hang out. Unfortunately, it’s league bowling night. Thankfully Apu wants to bowl too and Otto is around trying to win a lobster harmonica out of the grabber game. They decide to form a team and are initially thwarted by the $500 entrance fee, but that’s not anything to stop Homer Jay. He manages to get the cash from an ether-addled Monty Burns who mistakes Homer for the Pillsbury Doughboy aka Poppin’ Fresh and gladly writes him a check.

Apu, Moe, Otto and Homer do well in the bowling league until Burns discovers he’s paid for it. Monty insists on joining the team. Unfortunately, Monty is a very bad bowler. Homer is about to kick him off the team when Monty unveils a gift… uniforms. Thus, the Pin Pals cement their place in Simpsons history and we get Pin Pal Apu. 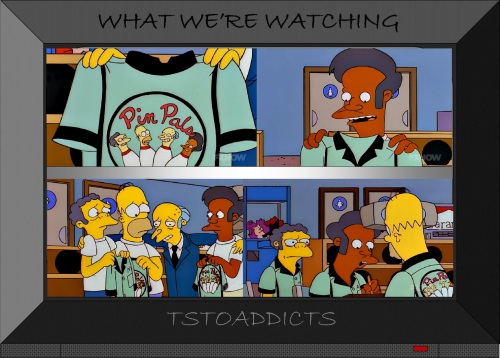 Of course, the team was the Pin Pals when they just had white shirts with the name written in black marker on the back, but it’s the iconic light green jersey we remember. One of those things that makes you feel happy when you see John Waters wearing it in “Homer’s Phobia” (S8:E15) or in Homer’s closet in “Three Gays of the Condo” (S14:E17).

Just seeing a photo of the Pin Pals at Moe’s Tavern in “Moe Goes From Rags to Riches” (S23:E12) is enough to evoke nostalgia for a fuzzball like me.

The Pin Pals are still at it too in “Penny-Wiseguys” (S24:E5). Otto may have had a psychotic break but they found a new anchorman in Dan Gillick, also known as the character voiced by Steve Carrell who turned out to be Fat Tony’s accountant.

So there’s some appearances by Pin Pal Apu in The Simpsons. The most exciting thing for me about this skin is the new character list for Pin Pals. Could this mean future skins for Homer, Moe and Burnsy with bowling humor? What do you think of the new skin? Did you like the classic episode of MAD t-shirts, tye dye school uniforms and bowling? Sound off in the comments and good luck in your next tap ball game.

19 responses to “Where Did THAT Come From – Pin Pal Apu”