Well the last Level Update of TSTO has Arrived!  But don’t worry…as Quimby points out in the questline for Level 60 the game will not end.

So don’t panic….it’s not the end!  Although for those of you currently locked out of your game, it may feel like the end.

So now that we have a new level, it’s time for the very last Level Update Turbo Tappin’!

I’m going to write more about this in a post about Levels now, but basically the more you level up you’ll unlock the ability to get the whole family in the Mountain…

Watch a Movie at the Googolplex

Watching Movies at the Googolplex will earn you Springfield Heights currency…here’s a list of what you can watch: 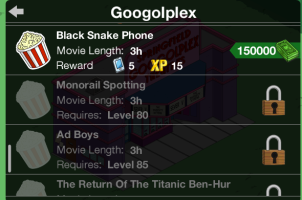 And that concludes the Level 60 questline!

If you run the Level 60 questline from start to finish, without using donuts, it will take you 2 days 13hs to complete (this doesn’t include running a movie at Googolplex).

What do YOU think of Level 60?  Were you happy with the character choice?  How about the dialogue so far?  Where have you placed the Googolplex in your Springfield?  Sound off in the comments below, you know we love hearing from you!