Should I Spend Donuts On Superheroes Issue 1 Returning Items?

Because all Superheroes need a sequel…Superheroes 2 has found its way into our pocket sized Springfields!  This super event hit our devices…and with it arrived a whole new Event to make us scratch our heads, and drive us slightly insane. So it’s time to break out those donuts for their super hideouts because there’s a whole store full of superhero inspired premium items!

Naturally, as with every event, there’s returning content in our stores that you can spend your donuts on.  Some returning items were once available for donuts and some were once free prizes that have come back as premium items.  Of course with that limited-time label it can be tempting to buy everything because it’ll be gone soon (especially if it’s making it’s second return to our stores).  But don’t sweat it!  That’s where we come in to tell you what’s worth those donuts and what you might want to hold off on.

Wondering if you should add the National Bank of Springfield, Fruit Batman or P-Rex and the Tar Pits to your Springfield?  Well before you hit that confirm button let’s break down the pros and cons of adding these sequel returns to your town.

So this is more or less going to be a rundown of each item, since they’re returning and we’ve previously written info about each.  I’ll give you my quick opinion on them and then link to their older posts….

Item: National Bank of Springfield
Donut Price: 80 Donuts
Previous Price: Was free for Superheroes 1, it was a prize
Earns: $200,22xp/8hrs (payout has increased to a premium rate for those who already have it)
Size: 9×9
Conform-O-Meter: Consumerism +10
Highlights: It’s basically another building for Springfield.  It does come with a short questline (1part) and Clownface will have a task there.  Beyond that…it’s a building.
Is it Worth the Donuts: Personally, I wouldn’t spend 80 donuts for it…it’s a building.  I think look at how important it is to you for Clownface to have 24hr task and make the assessment from there.  It looks neat, but 80 donuts is a steep price for just another building…..
Previous Posts: Bank Rundown Post (includes questline and dialogue)
Where Did That Come From Post

The Bank Will Leave the Store for Purchase on June 21st…so make your decision quick before it’s gone again!

Character: Fruit Batman
Donut Price: 90 Donuts
Previous Price: 90 Donuts Superheroes 1 and original release in 2013
Earns: At a premium rate, so 50% more on cash and XP
Highlights: Premium Skin for Mr. Burns.  He does come with a questline, and you can use him in battles. (Tech)  He also has some fun tasks…
Is it Worth the Donuts: My opinion is really unchanged from last year…and the Battle impact doesn’t sway it.
Previous Posts: Should I Buy
Where Did THAT Come From

Fruit Batman Will Leave the Store for Purchase on June 21st…so make your decision quick before he’s gone again! 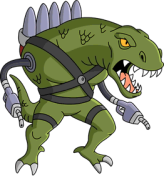 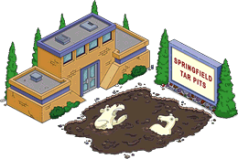 Character/Building: P-Rex and the Tar Pits
Donut Price: 175 Donuts
Previous Price: 175 Donuts Superheroes 1
Size: Tar Pits are 11×9
Earns: At a premium rate, so 50% more on cash and XP, Tar Pits Earn $150,13xp/8hrs
Conform-O-Meter: Consumerism +10
Highlights:  He does come with a questline, and you can use him in battles. (Brain)  He also has some fun tasks…
Is it Worth the Donuts: My opinion is really unchanged from last year…and the Battle impact doesn’t sway it.
Previous Posts: Should I Buy
Where Did THAT Come From

P-Rex Will Leave the Store for Purchase on June 28th…so make your decision quick before he’s gone again!

There are two freemium items that returned to the store as well…the Rad Mobile and the Fruit Bat Signal:

They’re freemium…buy them.  They only cost in game cash..so it never hurts to pick them up.

And that’s it my friends…the quick breakdown on the three returning Superhero items so far!   As the event goes on there will be more returning items re-released…so be patient as we see what each day/week/issue brings us 🙂

What are your thoughts on the returning items?  Have you picked them up?  Have them from last year?  Any items you passed on last year but picked up this year?  Why or why not?  Sound off in the comments below, you know we love hearing from you!

77 responses to “Should I Spend Donuts On Superheroes Issue 1 Returning Items?”