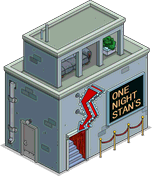 It was only a matter of time before the game became more like The Flintstones. That’s right friends… we had a gay ol’ time recently in TSTO and frankly, it was fabulous. Lots of new characters and buildings and an event closest to the good old days of level updates in a long time. Even better, Springfield properly celebrated Pride although I’ll agree with Patric that the dialogue was certainly written by heteronormatives. This isn’t the place for a debate about choices or lifestyles though. This is Addicts… a loving community where all are welcome and we got new stuff so the fuzzball is gonna tell you the origin for it. For this round we will be taking a look at a bunch of the Pride stuff and an abbreviated WDTCF for Julio & Grady. Here’s what’s on the docket:

So Julio and Grady have been in a combined nineteen or so episodes but rather than just showing every bit part… I thought I’d concentrate on their true origin since so many things came from one episode. These two fabulous gentleman came our way first  in “Three Gays of the Condo” (S14:E17). Courtesy of finding a note in Marge’s memory chest that lets him know how she felt back in their younger days while he played with his Neanderthal friends, he realizes Marge hates him and may have only stayed with him because of Bart. I give Marge credit for admitting she loves her husband but may have been resenting him a little bit their whole marriage. Homer feels unappreciated and can’t deal with the revelation and moves out.

But where to go when you need a new place to live? Well… first with Kirk but later to the Village Apartments after seeing an ad in the Apartment Finder (we put you in your place). The gag of the newspaper box suddenly being outside the Simpson home and then stolen by Cletus is just too good.

Homer’s potential new apartment is in a swanky section of town too (“so many gay book stores for a straight neighborhood”) and we see Armistead’s Mopeds right from go.

Sconewall Bakery is next with none other than Smithers on rollerblades. Sort of bugs me they called this skin Rollerskate Smithers when it’s pretty clear he’s on blades. Oh well. It’s a funny scene and I always love when Smithers lifestyle is played around with.

The rest of the episode is good stuff and I don’t want to ruin it for ya. Check out the episode. I mean c’mon… Weird Al and more.

Oh yeah… One Night Stan’s shows up too. 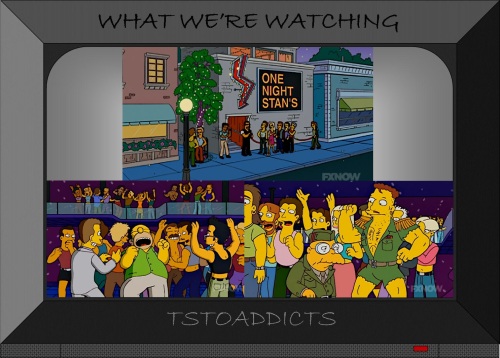 I guess I should mention One Night Stan’s is also in “The Blue and the Gray” (S22:E13) when Homer becomes Moe’s wingman to help him meet ladies. There’s lots of places he goes to engage the less attractive friend and talk block but the one we’re looking for is One Night Stan’s which looks a little different in this episode. This one also is not a gay night club so maybe there’s two versions in Springfield?

That’s really it for this origin post but I suppose I can at least mention some other Julio and Grady (but mostly Julio) appearances. There’s twenty-three episodes total where one or both appear but I narrowed it down to twelve I remembered off the top of my head. Basically once they were created the writer’s couldn’t help but include them when it made funny sense.

“There’s Something About Marrying” (S16:E10) – Julio gets married by Homer but not to Grady. Who the heck is Thad?

“I Don’t Wanna Know Why the Caged Bird Sings” (S19:E4) – Julio is among the Springfieldianites robbed by Dwight. 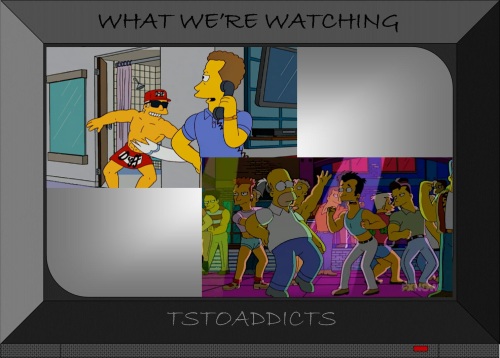 “Four Great Women and a Manicure” (S20:E20) – flamboyant Spanish King Julio wants the hand of Queen Elizabeth I but is snubbed for being more interested in Harlequin Krusty resulting in war. 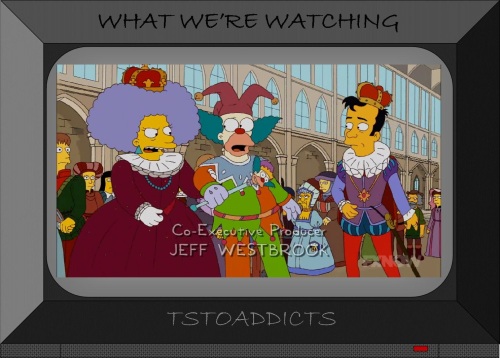 “Flaming Moe” (S22:E11) – no surprise… Julio shows up when Moe turn his tavern into a gay bar. My favorite moment is him flirting with Comic Book Gay. I also like seeing past flamboyant character like John and Llewellyn Sinclair. 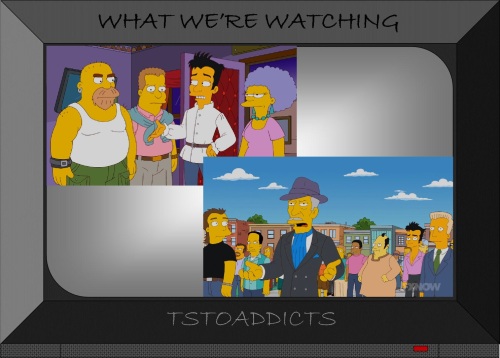 “The Blue and the Gray” (S22:E13) – Julio is Marge’s hairstylist at Harry Shearers. He’s Gaybraham Lincoln in the battle between blue and gray.

“Homer Scissorhands” (S22:E20) – Homer becomes a sought after hairstylist but the only way to get away from the grueling gig is for Julio to take his place.

“Moe Goes from Rags to Riches” (S23:E12) – Julio appears as Michelangelo in this episode.

“The Burns Cage” (S27:E17) – Julio & Grady are seen at a party Homer throws to set up Smithers with a new flame. They aren’t seen together. Guess this is an on and off relationship. Smithers briefly dates Julio here too. 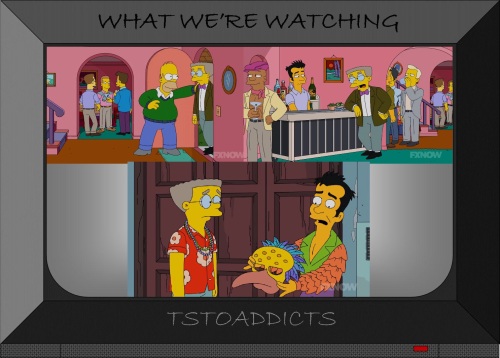 Basically if you need a sassy gay friend who makes you want to watch Hank Azaria in The Birdcage, Julio is your guy. Grady sometimes is his guy. They definitely make me laugh. Lots of stuff from one episode and then brief flashes in other episodes. What do you think of it all? Did you ever watch “Three Gays of the Condo”? Have a favorite Julio or Grady appearance I didn’t mention? I’m happy the game finally did a proper Pride event. Sound off with your thoughts on the items and happy classy tapping friends.