Note: on iOS and Android now

I just got home from work and have a Tiny Addict to feed and get to bed.  So i’ll be back with more info later tonight..but for now, remember this is an APP STORE update, which means you have to go into the app store to download it.  If you don’t see it, search Tapped Out and see if the update is available.

Ok the Tiny Addict is in bed, I’ve reviewed the files, converted over 5,000 images (yikes!) and have everything ready to go.  More details below the fold…

TWO new strips of land (thanks to a couple of tappers for helping out with this), located far right and very bottom.
Note: There is an issue with the strip of land on the bottom.  You can place buildings but not roads, water, dirt etc for some reason.  Hopefully, that’s fixed soon.

Now onto everything else…

As mentioned above things will get going with some auto start dialogue between Lisa and Homer.  This is followed by a couple of 6s tasks for Lisa and a 10s task for Homer.  You’ll also be required to build the Rock Stage…

After you’ve built the Rock Stage (and sent Homer to perform for 10s), you’ll then be tasked with sending Lawyers to neighbors towns.

Some of you are getting tripped up with this.  To perform this, and clear the task, visit a neighbor (Other Springfield always works) and tap the legal file in the top right corner.

I’ve still got to play around with the breakdowns and details.  So we’ll have a post up breaking down the details of neighbor actions later.

Cuffs are the Act 1 Event Currency

And tickets are the crafting currency…

For this event you’ll have to clear Fans in your Springfield.  Each Fan you tap will yield 10

and a chance for 2

New Items In the Store:

Do you hear that sound?  It’s the sound of Bracket Battle Brackets busting everywhere….

Flaming Moe’s- 60 Donuts. This is a FACADE for Moe’s NOT a whole new building. Generates Tickets (for crafting)/4hrs.

Legal Credentials- 90 Donuts. (Unlocks after you’ve cleared that sending Lawyers action as noted above) DO NOT BUY THIS!  Total waste of donuts.

This will unlock at Rock and Roll Never Forgets, Unfortuantely Pt. 7. First you’ll need to build the Kwik-E-Merch…

Same crafting as before.  Level up to unlock more items to craft… (16 total levels, and you’ll need 4,600 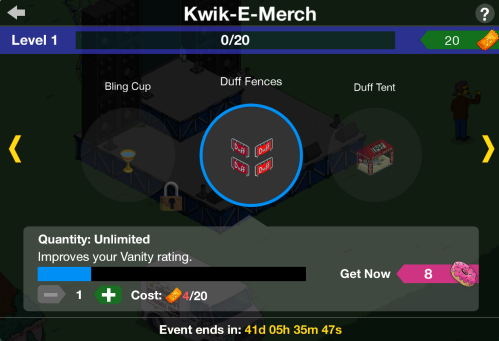 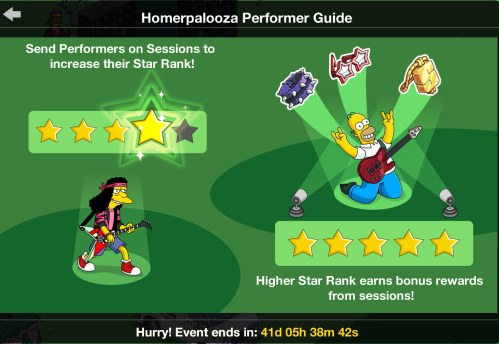 So in this event, similar to a few events in the past (TapBall, Superheroes, Halloween come to mind), you’ll be task with sending characters on a secondary task.  In this case it’s Jam Sessions.

Jam Sessions are done at the Rock Stage initally & has you progress through the event and Prize tracks you’ll unlock more Jam Sessions.  Various characters can Jam (perform on stage) to earn more event currency.  Which you’ll need to unlock all of the event prizes…

And the more characters you send to Jam the more currency you’ll earn…and also the better the character will get.  i.e. Practice Makes Perfect.

The goal is to get your characters to 5 star performers to earn the most event currency possible from each Jam Session.

As with other items in this event there’s A LOT more to Jam Sessions than I can detail in this rundown post.  So we’ll have a full breakdown post of Jam Sessions and star ratings up soon.

You may have noticed Weird Al is roaming around your Springfield in this event.  So how do you get him to be a full character?

Well unlock the Weird Al Prizes of course.  Once you’ve triggered Weird Al-truism questline you’ll unlock the ability to start the Weird Al prizes.  And to do this you send other characters on 3hr tasks to earn funding to Keep Al in Springfield…

As with others, more on this in another post upcoming.

So long time readers of this site know, we don’t do Spoilers.  EA’s often changed their mind on things and made changes as events progress, so as a rule of thumb we don’t post about stuff until it’s actually in the game.

HOWEVER…if you look at your Character Groups (in the game) you’ll see a sneak peak at which characters will be coming…here’s a preview: 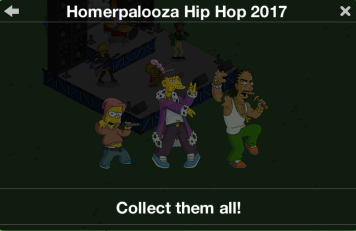 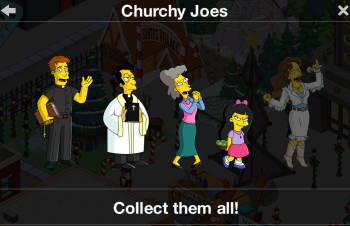 And there you have it my friends…the details on Homerpalooza 2017!

What are your thoughts on the event?  Excited to see the charcters/buildings?  Which prizes are you looking forward to unlocking? Sound off in the comments below, you know we love hearing from you!

344 responses to “Homerpalooza Update Is Live! (Updated and Complete)”