I have to admit… I was a bit like Charlie Brown this morning as I opened my game up, knowing that a new act was starting.  Like Charlie at Halloween…I was hoping for a full-size premium chocolate bar, and instead, appear to have received another rock.  One click…and BOOM…we are back to grinding.

I’m not really sure what to tell you, except that this act seems to be as easy as the last act, if you “want it all.”  But, like last act, we are left with the same “meh” and redundant craftables…along with some pretty uninspired “Main Prize Track” prizes.

But then…just as I was typing that last paragraph…I got a message from Alissa, that EA had changed the numbers again…upped them to make them a bit harder. This was AFTER I had spent 2 hours doing the math, and making the new calendars. Yes…EA is currently on my Sh*t list. Not a fan.

I’m not against the Potter-esque event….I’m just still waiting for the magic.

But…here are the numbers…all a couple of hundred higher than the originals that were in the files…just because EA apparently wants to prove “who is in charge” and is being Richard-ish…even though we have established that this update is anything but Hallow-Richardy in its execution.
As always….click the graphics to make them larger.

And again…for the “data only bunch.” 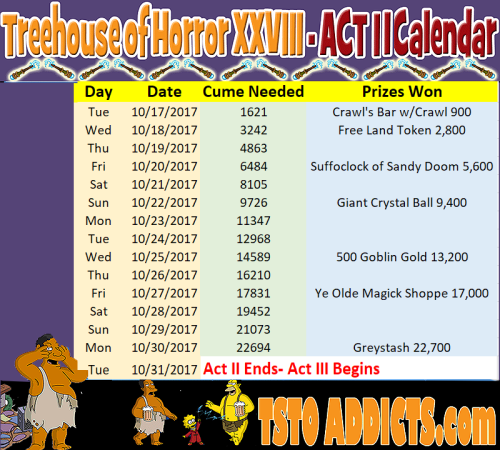 I’ll let you all decide if this is harder or EAsier than the last act. As I finished Act I with days to spare, I am going to guess that this will be fairly easy as well. But, again…when you look at the prizes…grinding starts to feel like grinding, until you get to Greystash. So…grind away. Oh, and…Feel the magic.