Gil’s Latest Gimmick: Details and Should You Buy Scotland Yard with Jack the Ripper

Looks like Gil’s back in Springfield.  He returned to Springfield early this morning (he likes to sneak into town under the cloak of darkness…), naturally with another offer for us.  What’s the latest gimmick he’s peddling? Well with a trip around the world, it only makes sense that he’s pushing a British Serial Killer.

So let’s break down the details of this latest offer and determine if you should spend your donuts on this Murderous Package….

If you tap on him you’ll see…

Gil: I had a great idea: I borrowed Professor Frink’s time machine. Figured I’d go back in time, give myself some advice, and stock tips, really turn my life around.  But I fell off the bike around 2008… had to live through the great recession all over again.  Bad times. Then a fella called Jack the Ripper found the bike in the past, and used it to come back to the present. And now I can’t wait to get rid of him.  Before he gets rid of me!

At which point you’ll see his latest gimmick…

Gil: Well, that’s it for Ol’ Gil.  Not just financially this time, but mortally. On the plus side, at least I won’t live long long enough to go bankrupt.

Now real quick because…if you refuse the offer will go back in the store.  It will be there…

If you accept you’ll be tasked with building Scotland Yard (instant build), once built you’ll unlock Jack the Ripper (he’s part of the Villans collection)… 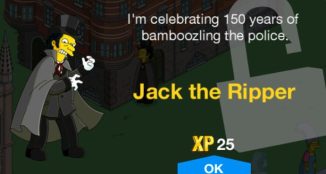 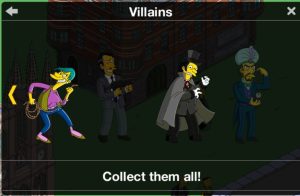 And now for the part, you’ve all been waiting for…the Should I Buy…

Pros
-Helps with heists for the Springfield Jobs Event
-Comes with a questline
-Scotland Yard is a nice looking building, with a decent footprint (compared to some of the other buildings with this event)

Cons
-Insanely priced for a character/building combo that’s not a regular character on the show.
-Animations are kind of lackluster (and look pretty similar)
-Not voiced
-Let’s face it…Jack the Ripper (the real one) was a serial killer.  Do you really want that in your town?

Final Thought
Premium:
This isn’t a spectacular premium buy.  This is one of those “if you like it, get it” combos.  It’s pricey and pretty meh in animations.  Scotland Yard itself is the best part of this deal and is 199 donuts worth it to you for a meh character and a building?

Freemium:
Pass on this one.  Overpriced and the character is lackluster.  You’re better off spending fewer donuts for Westminster Abbey and getting 2 characters.  Jack the Ripper is a pass.

Of course, in the end, it’s your decision, we can only tell you what we would or wouldn’t do…and as a premium player, I’m on the fence.  I like the look of Scotland Yard, but I don’t know if I can justify the 199 donuts on a so-so character.   But whatever you decide, just make sure you make your final decision before it leaves our games for good (or for now).

Here’s a look at his tasks…

And because this is the complete details on the Gil Deal, here’s the Turbo Tappin’ Version of his questline…(questline can wait till the event is over to complete)

What are your thoughts on Jack the Ripper?  Will you be spending the donuts to bring it to your Springfield? Did you already?  Why or why not?  Where have you placed Scotland Yard in your town? Sound off in the comments below, you know we love hearing from you!

And finally, because I know a lot of you like to know these things…

119 responses to “Gil’s Latest Gimmick: Details and Should You Buy Scotland Yard with Jack the Ripper”