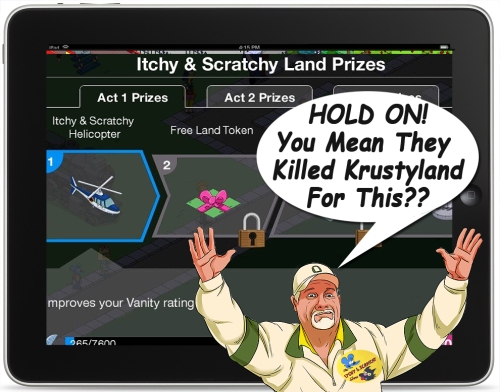 Let’s all breath a sigh of relief. And if that isn’t possible yet, because you are still gnashing your teeth over the glitches in this update, at least BREATH! Right?

After all…we are going to get a handful of prizes, as well as the chance to build a huge, rambling race track (that only makes MOST games lag…not all). But, I digress.

But now, you should have received the Act I Prize #1- The Helicopter!

Let’s take a look at the details…
So. Yes. It is another helicopter that doesn’t really fly.  Ironically, the only helicopter that DOES fly, is attached to that annoying Arnie Pye. His doesn’t actually exist on the ground…it only appears when it is in the air. So, like almost all of the things that fly in this game…about 95% of them don’t fly…and this helicopter is part of that 95%.

But, it does hover…which is technically “flying.”  Of course, me jumping off of a couch (not recommended at my age) is also technically flying…mostly…for a second or less.  But, I digress…

Here are the details. 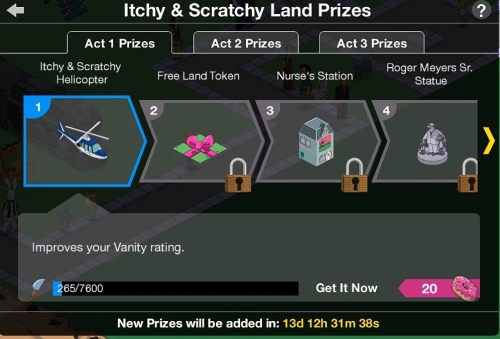 Prize: Itchy and Scratchy Helicopter
Size: 6×3
Earns: Nothing
Conform-O-Meter: Vanity +100
Can Be Placed: Grass|Pavement|Boardwalk|Pier|Dirt
What Does It Do: Animated when tapped, hovers like every other flying object
Comes with some dialogue and a task

Lisa: Come on, Mom! Let’s tour the park aboard the Itchy & Scratchy Helicopter!
Marge: I don’t know…some of those decorations seem slapped on without regard to aerodynamics.
Helicopter Pilot: Aerody-what-ics? What a funny word! Did you just make that up?
Lisa: Must…abandon ship…seatbelt…won’t unbuckle…

TASK: Tap the Itchy and Scratchy Helicopter
Lisa: That was definitely my last helicopter ride.
Helicopter Pilot: And my first!

The same conversation could have been had with an EA programmer. They don’t seem to understand aerodynamics either.

Next PRIZE – Free Land Tile (which I’ll skip) and move onto “The Nurses Station” (which you may need if you ever ride the Itchy and Scratchy Helicopter).