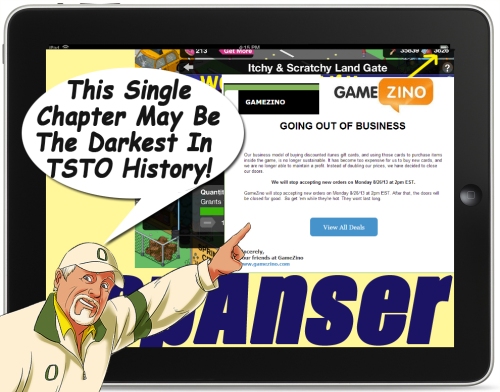 At the very beginning of TSTO Blogging, (which for the most part, started in January 2012 with TSTOTips), it was a Woolly Wild West of heroes and bad guys that were infamous in the TSTO world.  There are lots of posts from the past that talk about the details, and the who, and the what. But, there was an actual minor update in the game itself that made reference to some of the best-known.

I wrote a post in one of my earliest contributions to the Addicts world, that made reference to this, and the rest of the post is a hilarious reminder of how far we have come in the game.

Hey there kids!
The letter on my pill box says “W” so that must mean that it’s time for another… Uhm…wait a minute…it’s coming to me. Ah…right… HUMP DAY POST!

SO much to talk about this week…so little time.  Why? Because I am spending more and more time trying to figure out what in the name of Jeebus EA is up to!  For month(s) on end, they have been doing updates every other Thursday. Then, the next thing ya know, they do a surprise update that isn’t really an update at all…but it WAS a HUGE update…that was just talking about an update that is going to come on Thursday. AHA!!!!  So the Thursday thing is still the New Normal! (which deserved to be cancelled by the way….awful TV show…but I digress).

In short…what they did was release an update that was really just a teaser, telling us that there will be an update on Thursday (tomorrow) that will be a fun way to remind us to watch the actual Simpson’s Season Opener on Sunday.

So…to encapsulate…they did a fake update, to preview a new updated for the “pretend” Springfield (and Squidport) to promote their REAL TV Show, which is about the original Springfield…which they blew up for the game. And you wonder why I need medication so I don’t get head palpitations????

You can read about the upcoming Preview Update Here… which is about Homer going to a convention in Squidport.
https://tstoaddicts.com/2013/09/23/new-info-season-25-premiere-update/

I won’t go into any more detail…except to tell you that I am stoked for the new show…AND the new HALLOWEEN UPDATE that will come on October 1st (if we are to believe Lisa…and who doesn’t believe Lisa??). Which by the way…is NOT a THURSDAY!

If you need further proof that EA is starting to get its act together, and is going to keep us all on our toes (I assume we have 4 cartoon toes as well) all you have to do is look at the dialogue panel from the “update preview pretend update” that came out on Monday (again…not a Thursday).

It would seem that EA is completely into reading the forums…and is not above (below…not sure where a slap comes from) slapping a couple of the more notorious posters.

For those of you who don’t know… JoshJeerer is a play on words for JoshSheerer, a notoriously crabby (I’d call him cranky…but then I’d have to pay myself a nickel for copyright infringement), poster who complains about every update. And I mean every update.

Lamezino is a reference to the infamous Gamezino, which used cracked codes and date resets on iOS devices to offer old items and cheap donuts, before their popularity (and exploit fixes by EA)  imploded the “company.”

And Spandex…is of course in reference to spAnser, the equally infamous code cracker who has figured out (perhaps up until now) how to look into the EA database for hints, clues, images, etc. about upcoming levels, characters and buildings. He has also admitted to hacking several exploits of the EA code “to help others” and runs his own blog now, which many of us admittedly use, as a way to try our best to see into the future. Which apparently we can’t, BECAUSE NOBODY SAW MONDAY’S UPDATES COMING…

So…gosh…what does it all mean to the average TSTO player? Not a nickel and a hill of beans… (that is the best old-timey term I could come up with…other than Diddly-squirt…which always sounds gross to me).

The fact is…MOST people don’t want to know what’s going to happen…beyond knowing that SOMETHING is going to happen soon!  I admit that I use the information gleaned from Google searches to find as many quick-reference walk-throughs as I can, just so I can keep the right characters free, as I play in REAL time.  I don’t cheat. I don’t want to cheat. AND I don’t cotton to cheating by my “friends.”  If someone displays an inordinate amount of donuts, or is able to rush the game in ways that are simply outside of the STSC (Simpsons Time Space Continuum) range of Cartoon Physics… I delete them from my neighbors list.

What I WILL do…and what I am HAPPY to do…is try to use a little common sense in figuring out what COULD be coming… I love Christmas morning…and NOT knowing everything in the box (although this year I’d like iTunes gift cards…and no socks or Old Spice aftershave please).

So…if I WAS to use my brain pan…and turn the heat up to high… I would speculate that some of the NEW stuff is going to revolve around the upcoming TreeHouse of Horrors episode.

“The Simpsons” is now in its 24th season and is planning to air its most popular episode of each year on October 6th. That episode is “Treehouse of Horror,” which will have the opening sequence directed by Guillermo Del Toro (Pacific Rim). The episode will feature monsters and classic characters from horror films, and contain three segments. In “Oh The Places You’ll D’oh,” Homer rides around Springfield wreaking havoc as “The Fat in The Hat” in a rhyming Dr. Seuss-style tale. In “Dead and Shoulders,” Bart is beheaded during a kite accident, his head is attached to Lisa’s body and they must live together as one. And “Freaks no Geeks,” features Mr. Burns’ traveling circus, The Burnsum and Bailey Circus, which has stopped in Springfieldland in the 1930s. Trapeze artist Marge and Strong Man Homer are performers and things go awry when circus freak Moe starts to make advances towards Marge

Perhaps A HOMER Cat in the Hat outfit?
Some Sort of Lisa/Bart Character?
And FINALLY…another Marge character…as a Trapeze Artist…and if they are REALLY clever… it would allow her to perform in KrustyLand!

OK…I am clearly in need of a nap…

By NEXT week…ALL OF THE QUESTIONS WILL BE ANSWERED…and I will be posting about all of the cool stuff that we uncovered…as well as all of the donuts required to get the cool stuff…which will make me realize why “spandex” and “Lamezino” tried to make getting donuts easier in the first place!  But…once again I digress…

In less than 24 hours…the answers will begin to unfold…

Ok…so this one cracks me up.

First of all, it is hilarious that the writers/animators actually made reference to some of the best-known “TSTO Underworld Figures” of the time.

spAnser, was a well-known, if innocuous hacker, who mostly published teasers way before an update hit.  This was pretty common, until EA started hiding the files until an update actually goes live.  We don’t know, until you know…although some of the same techniques are still used to get the details. What is amazing to me, is that after almost 6 years of the game’s life, EA has really made very little effort to fix the original exploits.

GameZino…ah…truly one of the lowest, creepiest chapters of TSTO History. A guy (who shall remain un-named here, the same way as you would choose not to mention a serial killer for fear he will rise up from the ashes), who made stolen/hacked donuts an actual “business.”  Thankfully, EA made changes to shut him down.  However, there are STILL those who use similar hacks to provide “Free Donuts” that require all sorts of game hacks to pull off. I suspect that EA views Donut Farming as the lesser of two evils, and lets those willing to dedicate hours of grinding to the reward for their efforts.

And JoshSheerer?  I think it is best if you search the forums for his name… like most trolls, it seems he just vanished into the darkness.
https://forums.ea.com/en/the-simpsons-tapped-out/search?Search=JoshSheerer

But what REALLY made me laugh, was the fact that we were all thrown by EA’s messing with the launch date of a major event…in this case, Halloween 2013, which gave us a host of classic Halloween Content, including “Marge the Witch” and “Booberella.”  I hate to admit it…but Booberella was one of my FIRST premium purchases, as I had prided myself in playing “Freemium” up until then. But, who was going to pass up Booberlla?  She has Boooooooooooobs!  She was one of the first characters to hit the “1oo Donut” mark. Don’t tell me that EA doesn’t know their audience!

The excitement was palpable. After all, it was only the 2nd Halloween update ever.  Now, we are old(er) and jaded, and expect a pattern of major, grind-tastic updates at least 6 times a year.

The game has changed…a lot! I admit that I miss the shorter, fast-paced, “get this now or lose the chance” excitement of those earlier days.  But, I do not miss the nefarious types who made donut theft a business…or knowing too much, way before the updates happened.

We have settled into an acceptable level of consistency that could use some shaking up. But, compared to rampant server outages, and updates that truly required multiple log ins and neighbor transactions to complete, I like the “New Normal.”  Which by the way, really was an AWFUL show that deserved to be cancelled.

Here we are…in another “lull” before another “major update,” and as long as the game is around, I will blog, and “Keep On Tappin’.”

What do YOU Remember about the Early Days.  Were you one of those who got burned by Gamezino and had your game locked up by EA?  Do you remember spAanser? Post your memories below…