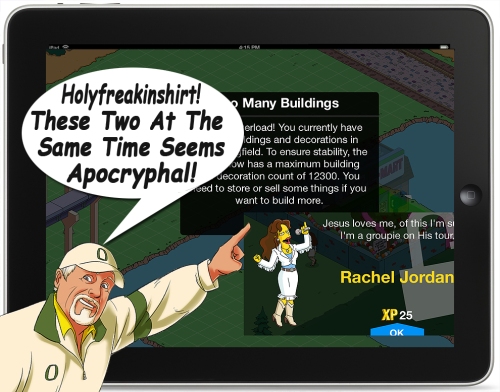 I am now one week away from our Rotary club’s big event. I took this on, because after doing two weddings last year, I figured, “how hard can it be to do a huge event for 200 people and raise $70K?”  Reading that line in print…makes me realize that maybe I should have read that line in print a few months ago, before I agreed to “chair” this thing.  The Southtowne SpeakEasy is going to be epic. If I live long enough to get through it.

Anyway, to say that I am not happy that we have some down time in the game this week, would be a bold-faced lie (And let’s face it…we don’t need any more bold faced lying going on in the world. Our liar cup runneth over). But, even in downtime, when everyone else has a chance to design, catch up, be creative and expand…I find myself having to do more, with less, even though I have more to work with.

That’s right…I’m talking about the idiotic Item Limits that continue to vex me. I hit it again last week. The hard item limit. The real deal, “You need to store…blah…blah….blah…” item limit warning. 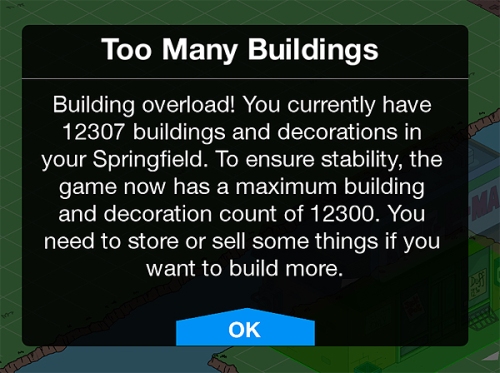 And just when I had a ton of donuts to spend! But, I found a solution!

Well…kind of a solution. Actually more of a compromise.

I have been doing casual donut farming for the better part of a year now. No regrets.  I’m not obsessive about it. But, I earn between 50-80 donuts a day, by farming 38 KEMs. No more…no less…just enough.  So, in anticipation of what I thought was going to be a new event/update this week, I had a little more than 800 donuts stored and ready for action.

The “Next Update” didn’t materialize, as you all know by now. So…I thought, “why let these donuts go to waste?  I’ll see what I can buy that is still available in my store, that I’ve been putting off for a while.

PraiseLand..  I’m not really sure why the delay. Probably something about TV evangelists giving me the creeps. But, I figured, “Why not?  I can put it over near my Washington DC Swamp area.”  And besides…it has a huge ark, which took me back to Deb and I visiting the “Ark Experience” on our huge cross-country trip “PW” (Pre-Weddings) back in 2016. I wrote about it here.

So… I bought it. But, when I tried to place it, BOOOOOOM!!!  As if being smote by the very hand of Gawdalmighty, I got the Item Limit Warning…and was dead in the water.

The great thing about the Praiseland Bundle, is that it comes with a ton of stuff, including walls, trees, shrubs, decorations, and a couple of main items. The downside, is that all of them take up space, and count toward your item limits. 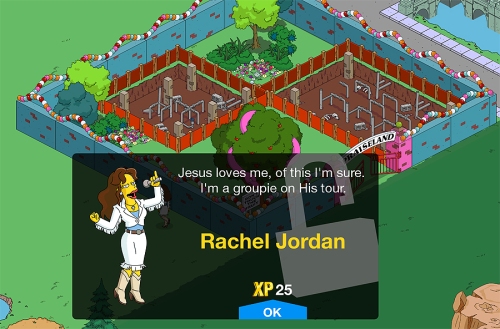 Which immediately set me into “Hunt, Store, Free-Up-Space” mode to find enough items to store, to enable me to place the thing I wanted to buy.

This entails “disappearing” my buildings to look for items that got hidden during the design process, or “leaning out” my landscaping. 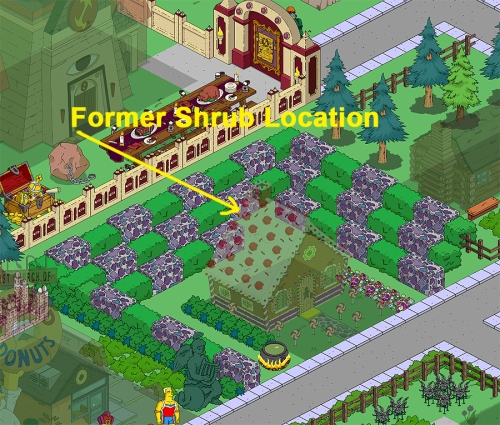 I hate doing this. It is tedious.  But, it is my choice, as I refuse to compromise, and just delete some of the super-rich landscaping of the rest of my town.

So…when I placed PraiseLand, I immediately “leaned out the landscaping to just the basics. Walls, Ark, Serpent Tree…and nothing else. No worries. Rachel will just have to have a little “Fundraiser” to bring back the flowers. 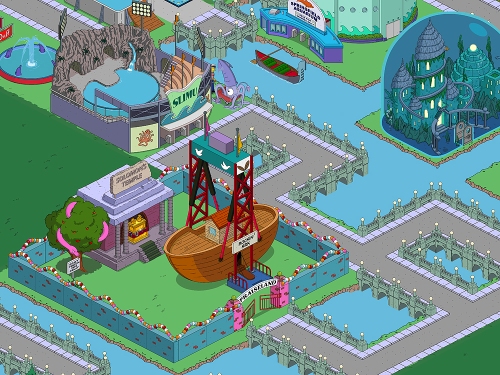 It’s enough for now.  I’ll come back and add some more, when EA increases the Item Limits. Which they always do…with every major update.  After all, it beats having to crop and cull in the areas that I did before Item Limits were a factor. A time when I could design freely, with literally hundreds of small shrubs, flowers and trees, to create my own form of beauty.

I still like visiting my Buddhist prayer garden, and sacred tree forest. 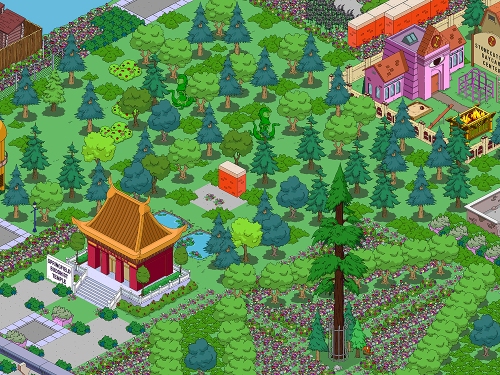 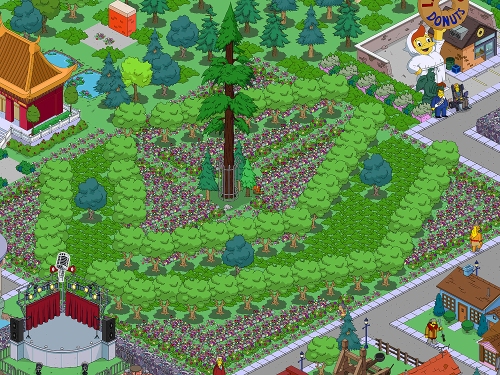 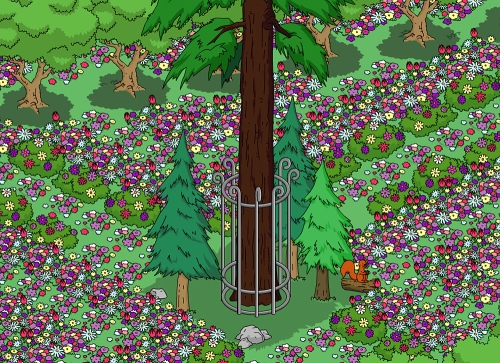 There are literally hundreds upon hundreds of flowers in this. It took me hours and hours to design. It’s not going anywhere… 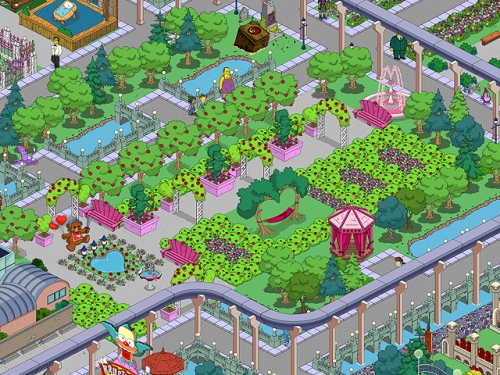 And no…I never have to buy another “Valentines Day” themed item again. I have that covered with my “Sweethearts Park” that has been around for years…and also has hundreds of flowers involved.  Store this?  Nuke it?   Pfffftttt… Bite Me EA!

So…the compromise is in finding items that cover a lot of space, but only count as a single item.  So, after a lot of putting it off, because they are kinda weird looking, I bought both Mt. Carlmore, and  the Springfield Gorge.  I put them both behind my “not finished, until they raise the item limits” version of Shelbyville. And created a bit of nose drizzle off of Carl’s nose…just to show that I think it is goofy looking, so “why not?” 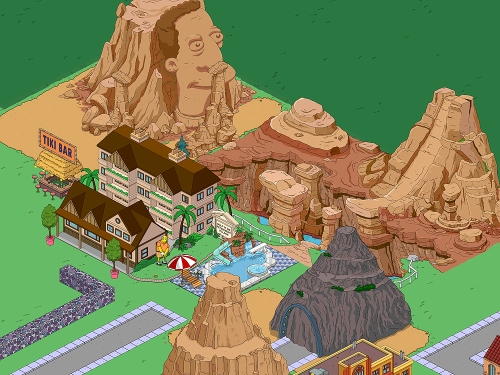 Loads of ground covered…with just two items ticked off of the limit.

The irony, is that both of those items carried large XP Bonus Multipliers, which only makes it EAsier for me to get more free donuts faster…wbich allows me to buy more stuff, that I can’t place, because of the Item Limits.

Add to that, the fact that I still have LOADS of land that has not been purchased yet…and so my Golden Goose Real Estate is still pumping out Land Tokens that I won’t use…because buying land, without being able to put anything on it, is a futile waste of space and time. So, you get why I am pissed at the Item Limits.

EA.  Once again….you have proven you CAN increase the item limits. You do it every major event by 150-200.  Why do you keep torturing us with this?  The so called “”Game Stability” is kind of joke. The game is mostly “stable” dependent on device and memory.  And I’ll gladly put up with the occasional animation ghost, if you just give me more items.

Let’s work this out. Let’s compromise.  YOU give me an item limit of 2,000 items, and I won’t complain about Item Limits again for a year. A WHOLE YEAR! That seems fair. Just do it!

I still love this game.  I still love designing.  Just let me keep doing so. Is that so much to ask?

OK… back to grind of FUNdraising. A week from today, I get my life back. Whooohoooo!  And I’ll never complain about weddings again. (4 down…one to go).

What do YOU do to compromise?  Have you hit the hard limit recently?  And no…I’m not going to nuke.  Sorry Safi!

62 responses to “Friday Filler – Making More with Less During Downtime”