Let the games begin!  After a long hiatus, we finally have a major event in Springfield!  Game of Games has arrived and it looks to be a game fest of nerdy proportions!

The Game of Games event follows the same event structure that the Simpsons Christmas Special and Love, Springfieldian Style events followed.  This event consists of 4 parts (or Acts), with each part lasting a week and taking us through a new part of the event!

For Week 2, Act 2, we’re following the Evergreen Terrors first round of gaming competition.  All of the prizes unlocked during week 2 play a role in that storyline.

So let’s take a look at the second prize this week, Krustcraft Krusty…an all-new costume for Krusty… 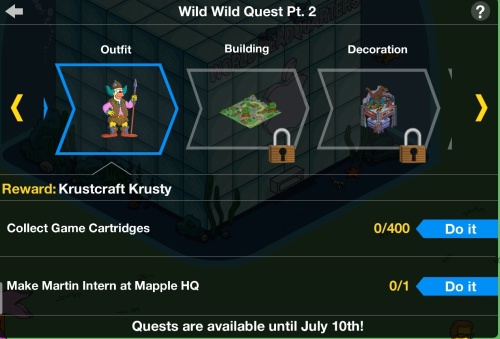 Krustcraft Krusty is a costume for Krusty the Clown, not a new character, and is part of the Game of Games Character Collection:

Once achieved you’ll unlock Krustcraft Krusty (a costume for Krusty)…

He does come with a full questline, albeit short, questline, here’s a look at that questline:

Krustcraft Krusty: We added an all-new virtual reality mode to my video game “World of Krustcraft”! When your avatar gets killed in the game, you’ll feel like you’re actually dying.
Bart: Cool!
Marge: Stop playing violent video games. It’s bad for your brain! You should be outside in the fresh air playing football.
Make Krustcraft Krusty Convince People to Play His Game- 8hrs, Earns $275, 70xp

Krustcraft Krusty: Why is no one is playing my Krustcraft games? I loaded it with worthless gimmicks like free downloadable content codes.
Lisa: Gamers want compelling stories and three-dimensional characters.
Krustcraft Krusty: No! Anything but that!
Larry Kidkill: Don’t worry, kid. Krustcraft is my biggest franchise, and I’m going to revitalize it with bold new ideas. Meanwhile, hand out free DLC codes like crazy. I have unrealistic revenue goals this game needs to hit.
Make Krustcraft Krusty Hand Out Downloadable Content- 4hrs, Earns $175, 45xp

Krustcraft Krusty: Listen up, Kidkill. I’m done putting my name on your boring, derivative garbage. My fans want something new and inspiring in my game. ‘Cause they know they’re sure as hell not gonna get that in my TV show. So the hell with your giant marketing department and corporate support. My game is going indie!
Make Krustcraft Krusty Regret Going Indie– 12hrs, Earns $420, 100xp
Make Bart Pan Krusty’s New Indie Game- 4hrs, Earns $175, 45xp

And finally, here’s a look at his tasks… 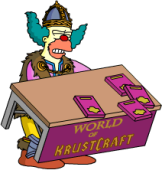 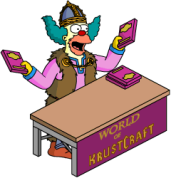 And that’s it my friends, the details on the second Game of Games Week 2 Prize!

Up next? The last 3 prizes for Act 2, which we’ll cover in 1 post, Happy Little Elves Farm, Time Snowboarder Display, and Stormy Island.

Thoughts Krustcraft Krusty? Thoughts on his tasks? His embarrassment to Sophie? Sound off in the comments below, you know we love hearing from you!