It’s finally Christmas in Springfield!  Our pocket-sized Springfields have been covered with a fresh blanket of snow!  What’s in store for us this time?  Well, we’re tasked with seeing if Grampa can bore Death…well to death!  Loads of dialogue with this one, so be sure to read along to see what happens! And of course, I’ll be posting it as each week wraps up.

Abe’s in Toyland follows the same event structure of the Multi-Events before it.  This event consists of 4 parts (or Acts), with each part lasting a week and taking us through a new part of the event!

With Act 2, week 2, one new premium character was introduced. In addition to helping with event currency, Abbey comes with her own, short, individual questline, so let’s take a look at the full dialogue questline now… 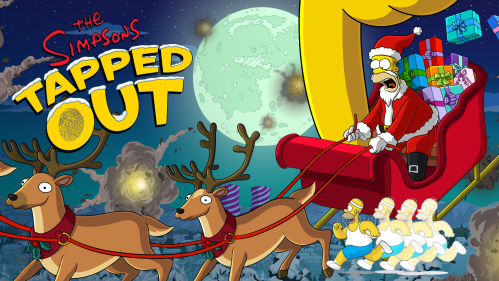 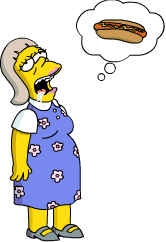 Abbey: Hey Homer! It’s me, your half-sister Abbey from across the pond. I came with my mother. We’re both looking for our lost American loves. She wants to find your father, Abe. I want to find donuts.
Homer: You’ve come to the right man. I’ll teach you everything there is to know about donuts. You’ve heard of pub crawls? We are going on a donut stagger.
Abbey: My hero!
Make Homer Teach Abbey About Donuts- 4hrs, Earns $175, 45xp
Make Abbey Enjoy Donuts- 4hrs, Earns $260, 70xp

Abbey: Wow! I’ve never had so many different fried pastries. Donuts, crullers, bear claws, fritters, funnel cake, hush puppies…
Homer: Don’t forget my favorite: the bits of dough left behind at the bottom of the deep fryer.
Abbey: I have one question. The donut has a hole. But what happened to the thing that was in the hole?
Homer: That is a very deep question.
Make Abbey Think About Donuts- 4hrs, Earns $260, 70xp
Make Homer Ponder Donut Holes- 4hrs, Earns $175, 45xp

Abbey: Thank you, Homer, for teaching me that there is so much more to fried dough than the simple donut. But I think I need to take a break from stuffing myself with sweet pastries. Do you know where I can stuff myself with a pizza?
Homer: Absolutely. All we have to do is place an order online. Somehow.
Make Homer Play with his myPad- 45s
Make Abbey Play with her myPad- 12hrs, Earns $600, 150xp

Edwina: Abbey, my dear daughter, what in the name of God have you been doing with your half-brother Homer? You’re twice the size you were when we came to America. I thought you came here to get away from stuffing yourself with roast beef and Yorkshire pudding.
Homer: Yorkshire pudding? What’s that?
Abbey: What’s Yorkshire pudding? Only the best fat-soaked dough you’ve ever had.
Homer: Fat-soaked dough. Sounds totally different from donuts. Teach me everything, Abbey.
Make Abbey Teach Simpsons About Yorkshire Pudding- 4hrs, Earns $260, 70xp
Make the Simpsons Each Yorkshire Pudding- x3. 4hrs, Earns $175, 45xp Freemium, $260, 70xp Premium

And this concludes the premium dialogue for Week 2, of the Abe’s in Toyland Event!