That’s right tappers…EA has blessed us with another update (and we are all happy for that…right?), when they could have “gone dark” like they did last year (as in an almost 12 week lull).

But instead, they went dark in another way, with Black History Month! I love it. It’s about time!

Keep reading for some of the details!

It seems that EA may have been listening when we said we were tired of repeats and Dopplegangers for characters.  Because they are giving us a TON of new ones.

Yes…there is another young version of Abe (who looks like Bart) …and another character that looks a lot like Marge (but she’s Canadian).

But there are NINE of them…

And you want some Unique Buildings?  You GET THEM!

And a bunch of Decorations! 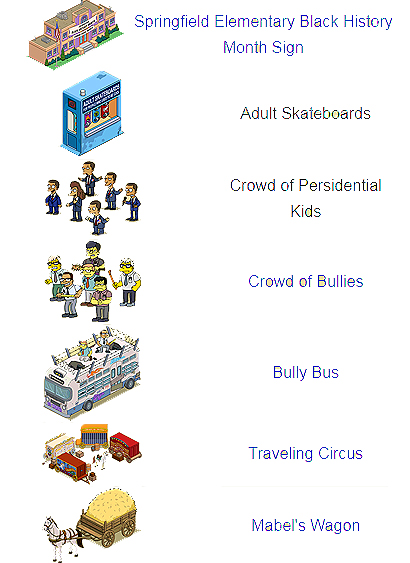 The Event Starts with Mayor Quimby and Carl…so keep them free!

Then…if you are wise, you will keep all of your citizens of color free as well… Like Doctor Hibbert?

to be able to get things from the Black History Month Mystery Box. And yes…I am guessing that it will mostly be OLD content in that box. But, we’ll have to see.

As I can’t really pull files…I am guessing along with most of you. But it is clear that this is going to run past Valentines…and will likely have some sort of reference to President’s Day.

It appears to be a FOUR ACTS OVER 5 WEEKS   – the “Acts Being”: (ENDS MARCH 12th)
1 No Laughing Matter
2 Fair-Weather Father
3 In the Lukewarm of the Twilight
4 From the Mouth of Abes

This does appear to have a lot of “history” in it…so the writing should be good.  Again…we’ll see!

AND YES>>>>There is a TON of Returning content….
INCLUDING THE GOLDEN GOOSE REALTY!!!!

At least this feels like a lot more effort went into it than the last couple of updates! And yes…the dialogue is going to be uncomfortable.

Check Back for More Info as we get it!