So let’s get started this week by talking about a nearly hundred year old sporting event in the United States, the Soap Box Derby.

In the forty fourth episode of The Simpsons, Saturdays of Thunder (Season 03, Episode 09), Bart becomes involved in competitive soap box racing. However, realizing he is a terrible father based off a magazine quiz testing FQ (fatherhood quotient) that Marge brings home from the salon, Homer tries to be a more attentive father, with help from the National Fatherhood Institute. Homer starts helping Bart build his soap box racer. 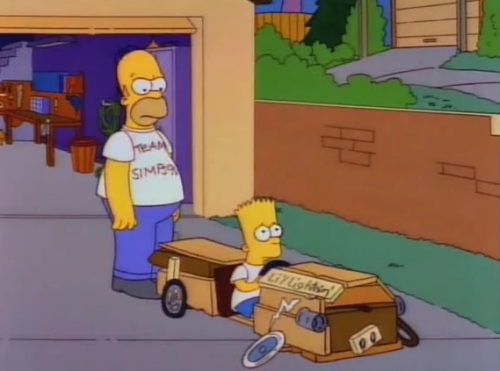 But when Bart chooses not to use it in his big race against Nelson, instead opting to borrow Martin’s scientifically engineered aerodynamic racer; Homer can’t help but feel hurt.

But have you ever wondered if soap box racing is real?

The Soap Box Derby is a youth soap box car racing program which has been run in the United States since 1933. In 1933, American photographer Myron Scott saw a group of children racing down a hill in homemade soap box cars in Dayton, Ohio. Myron put together an impromptu race for 19 boys. There was so much interest that Myron arranged a bigger race, with prize money for August 19, 1933. A whopping 362 kids showed up with homemade soap box cars built of fruit crates, sheet tin, wagon, and baby stroller wheels.

The following year, the first official All-American race was held on August 19, 1934. The national winner was Robert Turner of Muncie, Indiana, who made his car from the wood of a saloon bar.

In 1935, the race was moved from Dayton, Ohio to it’s now permanent home in Akron, Ohio because of its central location and hilly terrain. That same year, when a car accidentally went off the track and struck NBC’s top commentator and sportscaster Graham McNamee while he was broadcasting live on the air, it increased the public’s interest in the annual event and led the city of Akron, Ohio to create the permanent venue of Derby Downs.

During  it’s peak popularity in the 1950’s and 1960’s, the event was sponsored by Chevrolet and attended by large crowds of up to 70,000 spectators (including famous TV and movie stars). James Stewart even cancelled a weekend of Broadway performances in 1947 to attend the annual event and refunded all the tickets.

Now Soap Box Derby World Championship finals are held each July at Derby Downs in Akron, Ohio. Participants now include various age groups from 7 to 20 and include both boys and girls (though originally the Derby was just open to boys).

Soap box cars competing are unpowered, relying completely upon gravity to move. They can reach speeds over 55 kilometers per hour (approx 30 miles per hour).

Like most sports though, it has not been without scandal. In 1973, 14-year-old Jimmy Gronen of Boulder, Colorado was stripped of his title two days after winning the national race. Suspicions were running high even before the finals, and Jimmy was actually booed by many spectators, as he was winning by 20-30 feet (while most races are won by 1-3 feet). X-ray examination of Jimmy’s car revealed an electromagnet in the nose. When activated at the starting line by Jimmy leaning his helmet against the backrest of his seat, an electromagnet in the nose of his soap box pulled the car forward by attracting it to the steel paddle used to start the race. Jimmy’s uncle/legal guardian, wealthy engineer Robert Lange, was indicted for contributing to the delinquency of a minor and paid a $2,000 USD settlement (approx $11,729.19 with inflation).

Now that we’ve learned more about the soap box derby, be sure to come back next week when we continue our Monday morning musings with the next episode of The Simpsons.

What’s your favourite Simpsons racing episode? What about your favourite Simpsons father-son episode? Were you familiar with the soap box derby? Have you ever participated or know someone who has? Did you hear of the 1973 Jimmy Gronen scandal? What’s your most memorable sports scandal? Sound off in the comments below. You know we love hearing from you.