Where Did THAT Come From – All American Apu

“America for spacious skies for amber waves of grain… for something else I should’ve known and posts about the Simpsons… America… America….”

Oh!  Hey there readers!  Fancy meeting you here.  Don’t mind me, I’m just exercising my freedom brutalizing a song I’ve probably sang one too many times and really should remember.  We’re all still in the thick of the TSTO 2014 Event for July 4th.  Lots of cool American patriotic stuff came our way and you know that means… we’re here to riff on the origins of said stuff.  For today’s goodness, I thought it’d be fun to talk about the returning All American Apu skin.

Kind of a comical look for our favorite convenience store clerk but it hails from the olden days of the Best. Show. Ever.  In “Much Apu About Nothing” (S7:E23), the episode focuses on the issue of illegal immigrants which for the time in 1996 was pretty topical (Oogle Proposition 187).  Interestingly, it’s Matt Groening’s 3rd favorite episode of the show according to an Entertainment Weekly article he did in 2000.

This episode includes bears, bear taxes and scapegoating illegal immigrants.  Bear hysteria and unwillingness to pay for Stealth Bomber bear protection results in a proposition that would deport all illegal aliens from Springfield.  Unfortunately, this list includes dear Apu Nahasapeemapetilon.  It’s not fair.  There’s so much he “wanted to see and to do and to have done to him.”  He came to America as a student and only stayed to ensure he paid off his student loans by getting a job at the Kwik-E-Mart.  Of course, he paid the loans but by that time he had made so many “friends”.  What’s a transplanted Indian with a PhD to do?

Courtesy of a KEM visit by Kearney with a fake ID and ice cream sandwiches hidden in his armpits, Apu obtains fake documents (a cheap $2,000 forgery lol) from Fat Tony but the mobster urges Apu to act American.  Apu knows how to do that… wear a giant cowboy hat, New York Mets Jersey (his favorite squadron lol), blue jeans and talk in a southernish accent.  Possibly supposed to be a Wisconsin accent considering his papers say he’s from Green Bay but I think Apu sounds southern.

“Who needs the infinite compassion of Ganesha when I’ve got Tom Cruise and Nicole Kidman staring at me from Entertainment Weekly… with their dead eyes!  Look at me!  I’ve betrayed my Indian heritage!”

So sad.  Not to worry though because Lisa finds a grandfather clause allowing Apu to become an American citizen by taking the naturalization test.  Major props to him since statistics say 35% of native born Americans couldn’t pass the test.  For the record, I’ve taken many different versions and always pass but I am a history major.  (You can find a USA Today version here if you’re interested.)

Episode Bonus: We also get a couple great views of Apu’s Ganesha statue that he prays to in his 45 second TSTO task. 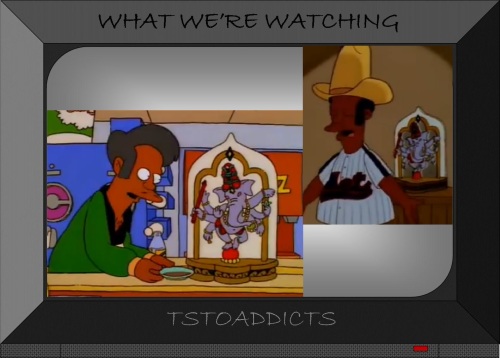 For the low price of 30 donuts, this skin was brought back this July 4th.  While the skin doesn’t have its own questline, it does provide Apu with new tasks at a premium rate.  Two of them are outdoors.

Well there ya have it.  The origin for a new skin available for this limited-time event.  Sound off below with any comments you have about Apu’s zany dress style.  Y’all stay classy as usual and keep on tapa-tapa-tapping in the free world.

This entry was posted in Characters, Where Did THAT Come From and tagged All American Apu Tasks, Apu character skin, Apu in a cowboy hat, How Can I Unlock All American Apu?, Simpsons Illegal Immigrants, The Simpsons Tapped Out, TSTO, TSTO 4th of July 2014, TSTO All American Apu, TSTO Tips and Tricks. Bookmark the permalink.

28 responses to “Where Did THAT Come From – All American Apu”