So let’s get started this week by taking a tour to a country that plays a role in the eleventh episode of our favourite family The Simpsons, Albania.

In the eleventh episode of The Simpsons, The Crepes of Wrath (Season 01, Episode 11), when Bart flushes a cherry bomb down the toilet, Principal Skinner suggests he should partake in a foreign exchange student scheme. Bart is sent to France, working for criminals that spike wine with antifreeze. Meanwhile, back in Springfield, Adil Hoxha, an Albanian boy, is exchanged to the Simpsons. Much to Homer’s delight, Adil takes a lot of interest in Homer’s work. But in reality, Adil is showing an interest in the power plant to send information back to the Albanian government. 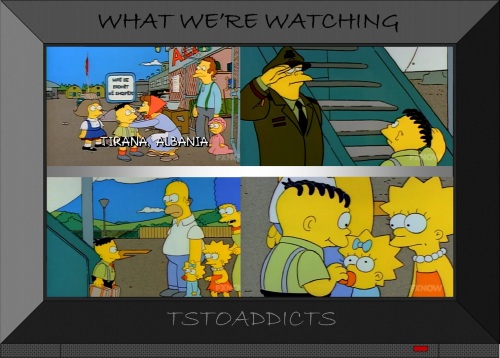 While I’ve had the pleasure of traveling to 49 countries, I have not had the opportunity to go to Albania. But I’ve always wanted to know a little bit more. So here’s some info on Albania:

The Republic of Albania is located in southeast Europe, bordering the Adriatic and Ionian Sea. It’s capital is Tirana, a city that is home to almost 800 thousand of the countries 2.8 million citizens. The country is the 140th largest in terms of surface area at 28,748 km2 (11,100 square miles). Their official language is Albanian and official currency is the Lek.

The overall life expectancy at birth is 78.5 years; 75.8 years for males and 81.4 years for females. The country’s total fertility rate of 1.51 children born per woman is one of the lowest in the world.

The flag of Albania is a red flag with a black double-headed eagle in the centre. The red colour symbolizes the bravery, strength and valour of the Albanian people and the black colour appears as a symbol of freedom and heroism.

With a coastline along the Adriatic and Ionian in the Mediterranean Sea, fish, crustaceans, and seafood are a popular and an integral part of the Albanian diet. Otherwise, lamb is the traditional meat for different holidays and religious festivals for both Christians and Muslims.

Now that we’ve learned more about the native country of one of our favourite Simpsons spies, be sure to come back next week when we continue our Monday morning musings with the next episode of The Simpsons.

This entry was posted in Math Mayhem, Safi's Stats and Strategy, Tapped Out and tagged Albania, Monday Morning Musings, Super Safi, The Crepes of Wrath. Bookmark the permalink.