Where Did THAT Come From: Sir Loves-a-Lot

The Valentine’s day update was quickly followed by the chaos of Superheros, so we didn’t have a chance to cover everything before Superheroes hit.  Here’s an Addicts post we wrote during Valentine’s Day, but are just now getting the chance to share it with you 🙂 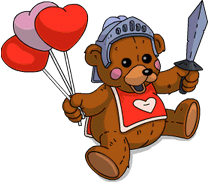 This post I will be going over the Origin of Sir Loves-a-lot. Why is this in our game? Where did it appear in an episode? Let’s dive into the Simpsons TV Series to find out more.

Season 9, Episode 22: Trash of the Titans
Costington’s is desperate for money as they go into their summer lull. So what do they do? Make up a Holiday to completely gouge customers of any extra money they have of course. Lol. Nothing sells like a random Holiday with a lot of random “Stuff” to buy, decorate, and give out.

Mr. Costington’s doesn’t like the suggestions his board is tossing out. He wants something like Love Day, but now so lame… so LOVE DAY it is. Lol.

Marge of course has gifts for everyone and gives Homer his first. It’s Sir Loves-a-Lot, the Bear who loves to love. Homer isn’t feeling so loved getting him though. He was hoping for Lord Huggington instead (remember that lil line for Valentine’s Day?)

Poor lil guy didn’t last long though, as soon as the day was done… into the trash he was smashed. 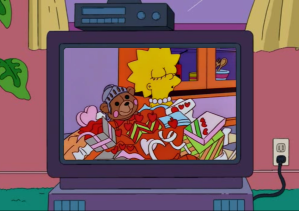 And that pretty much is it. A lil random Holiday Gift from a created by Costington’s Holiday for the Summer, and we all got a free one in our game. Ha ha! What do you think of it? Did you log in to get your free Bear? Were YOU hoping for Lord Huggington instead too? Lol. Let us know below.

This entry was posted in Valentines2015, Where Did THAT Come From and tagged Love Day, Sir Loves a Lot, The Simpsons Tapped Out, TSTO Addicts, TSTO Tips and Tricks, TSTO Valentine's Day 2014. Bookmark the permalink.

16 responses to “Where Did THAT Come From: Sir Loves-a-Lot”