Where Did THAT Come From: Groundskeeper Seamus

In our silly lil game, we sometimes see things pop in that we have no clue as to their Origin. They seem familiar, but we just can’t pinpoint from where. That is why we decided to make a fun lil reminder out of it. To let you know just Where did THAT Come From? 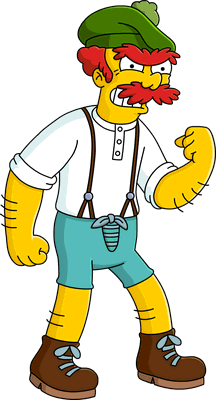 Groundskeeper Seamus appeared during the end of our Casino 2016 Event in the form of a hybrid Easter/St. Patrick’s Day Mini release.

You can find more information for his Questline HERE and his Should I Buy HERE.

This post I will be going over the Origin of Groundskeeper Seamus. Why is he in our games? What does he have to do with Springfield? When did he appear? Let’s dive into the Simpsons TV Series to find out more.

We first snag a glimpse of Seamus when Lisa is in Principal Skinner’s office telling him that they need to stop letting just anyone talk about their Careers… like Groundskeeper Willie and his arch nemesis Groundskeeper Seamus.

Skinner goes off on Seamus, “90 minutes of watching a man drink in a bathtub…”. Lisa tells him they can use professional Speakers instead. Skinner leans out his window and tells Seamus they won’t need him to speak anymore. Seamus immediately blames Willie and they begin to fight. 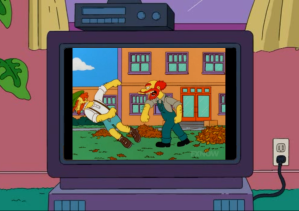 What did you think of Seamus? Did you splurge and pick him up? If so, what do you think of his tasks? Let us know.
~Bunny

This entry was posted in Where Did THAT Come From and tagged 2016 Casino Event, Groundskeeper Seamus, Groundskeeper Willie's Nemesis, St Patricks Day 2016, The Simpsons Tapped Out, TSTO Addicts, TSTO Tips and Tricks. Bookmark the permalink.

26 responses to “Where Did THAT Come From: Groundskeeper Seamus”