Where Did THAT Come From – Moe’s Cavern & Caveman Moe

Moe: Aw, c’mon, look at me, I’m a gargoyle. What with the cauliflower ear there, and the lizard lips…
Carl: little rat eyes…
Homer: caveman brow…
Lenny: don’t forget that fish mouth.
Moe: Okay, I get it. I ain’t pleasant to look at.
Lenny: Or listen to.
Carl: Or be with.

Poor Moe… he’s always the butt of the joke as we see from this dialogue from “Pygmoelian” (S11:E16) where the barflies try to convince Moe he looks better than people at White Castle. I often feel bad for him in the show but I guess it is what it is. In the first act of an event which starts with items from Springfield’s primeval past, Moe got some more ridiculing. As usual, new additions mean it’s time for me to stop eating cheetos in my recliner while working on my weekly podcast and get to writing about the origins for it all. It’s always a pleasure to re-watch episodes of the Best. Show. Ever. For this round of origins,we’ll be taking at the 7th Act One Prize for 79,900 fossils in the 2017 Time Traveling Toaster Event, Moe’s Cavern & Caveman Moe.

First up, Moe’s Cavern which is not a dinosaur or prehistoric origin and hails from “At Long Last Leave” (S23:E14). This is the 500th episode of the Best. Show. Ever. and deals with our favorite family being kicked out of Springfield. Where to go when you’ve been exiled from town… the Outlands of course. A wild and lawless off-the-grid unincorporated settlement where those rejected by society can live in peace. 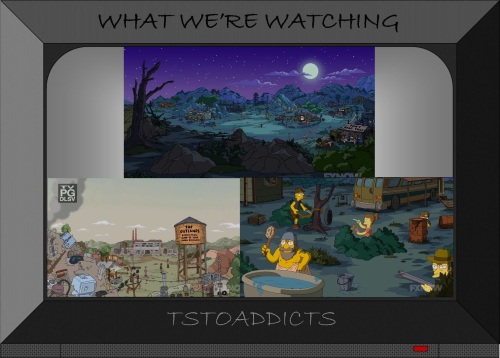 You can visit the owner of wikileaks, ride jet bikes, watch a fox on TV, and/or live the Mad Max dystopia of your dreams. 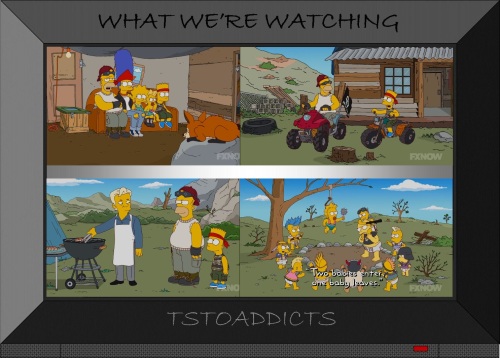 The Simpsons do okay in their new digs. Heck, Lenny and Carl visit just to find a better way of life. Moe is right behind them setting up a new establishment called Moe’s Cavern. 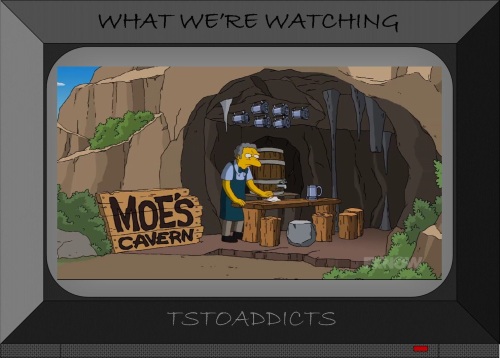 But what about Caveman Moe? For this we first head to a more recent episode… “To Courier With Love” (S27:E20). This episode that was all about snake smuggling to Paris (and brought us a return of Cesar and Ugolin) actually included some prehistoric bits. The episode was bookended by cavemen versions of characters from the show. The beginning is cavewoman Marge dealing with the same motherhood struggles as present day Marge but it’s the end segment where we find Moe as a caveman on a classic painting made by caveman Matt Groening. 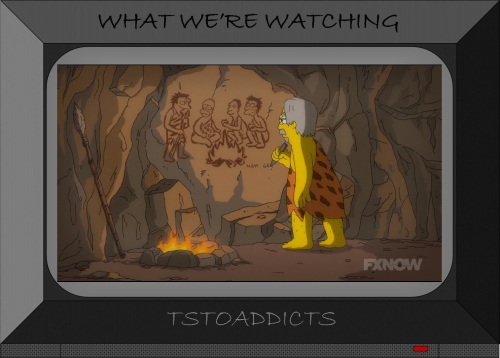 This isn’t the first origin of Moe being shown as a caveman. The true origin for caveman Moe comes from “Homerazzi” (S18:E16). We see cavemen versions of both Homer and Moe in the couch gag. Only difference is Homer is on an evolutionary path upwards and Moe is going the opposite direction. 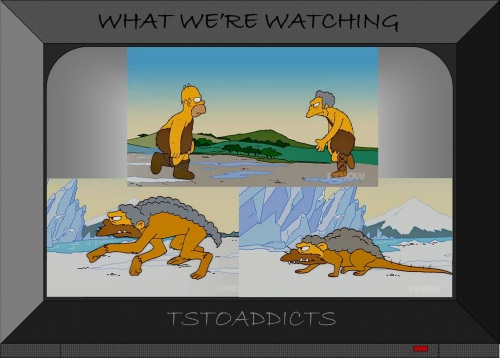 So there you go friends… the origins for Moe’s Cavern and Caveman Moe. Pulls from a few different episodes that were combined into something that made sense in the prehistoric act of the event. Did you remember these episodes? What do you think of the prize? Wish the bartending homunculus got more respect? Did you earn it? Sound off in the comments and here’s hoping your time traveling toast is done just right with extra butter. Mmmmm… butter.