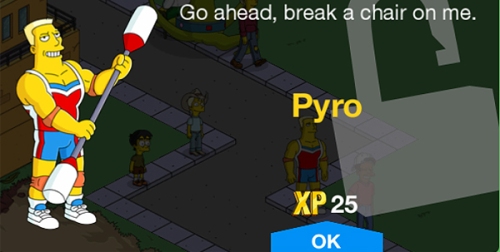 The Teaser for this event said, “It’s a battle for the ages! Wait, we mean a battle of the ages – kids and adults are at war in Springfield! But what could cause this generational divide – Unfair bedtimes? Too many vegetables? Territory rights to the town’s new playground? (That last one was so specific it has to be true). Can Bart lead the youths to victory over Homer’s aged army and claim Springfield’s new Mega Playscape?

This is the kind of event where you really need a “program to keep track of the players.”  Bart Royale is less like a “royal flush,” and more like a game of 52 card pickup! But, that said, we do get a load of new items that are fun, and in some cases darn right rewarding for our efforts!

Let’s take a look at the FINAL  Prize of ACT I:

Once Pyro is placed, he will kick off a dialogue and set of tasks…

After task
Pyro : I need to be more than Luann’s ex-lover. It’s time I got back into the stunt business. 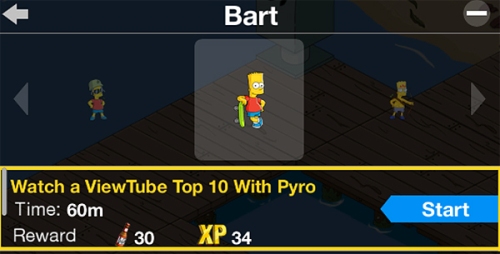 After task
Pyro : Airbursts? Flash Pots? Gerbs? Pyrotechnics cost money. How can he afford these?
Bart : He’s sponsored and has tons of followers. He makes more money now then you ever did on TV.

Rube Tube Pt. 3
Pyro : If any Joe Schmo can film falls, hits, and explosions like this, then I can! I spent years as a stuntman and television performer.
Bart : There’s a little more to it than just pointing a camera at yourself…
Pyro : Mmmm…doesn’t look like it to me.
Pyro : One question though: Are cameras still as big as a toolbox and sit on your shoulder?
Bart : Here, let’s order you a NoPro.

Rube Tube Pt. 4
Pyro : Hey Pyro-maniacs! Pyro here broadcasting my first video.
Pyro : I’m going to show you some classic stunts from my day.
Pyro : None of this snorting cinnamon or taking golf balls to the nards nonsense. No, these stunts could actually kill me!
Pyro : Are you ready to be thrilled!? The heat is on, so let’s go!

Rube Tube Pt. 5
Pyro : Okay, how do I get this into the tube webs?
Bart : Let’s check out what you got.
Bart : *laughs hysterically* You’ve got the camera pointed at your face the whole time! All we see are your dippy facial expressions.
Bart : You look like you’re cleaning up barf and are about to blow chow yourself. I am definitely uploading this!
Pyro : NO!

After task
Pyro : I don’t know how I can face my fans now.
Bart : Pyro! You’ve got two million views already! And a puke sawdust company wants to sign you to a commercial series!
Pyro : Pyro is back!

And that’s it for Pyro’s Event Task Line…
However, Once you have Pyro, you can also send him on Event Currency Earning Tasks… he can Join the Other Adults in Battle

And After the Event is Over, Pyro is a FULL Playable Character! 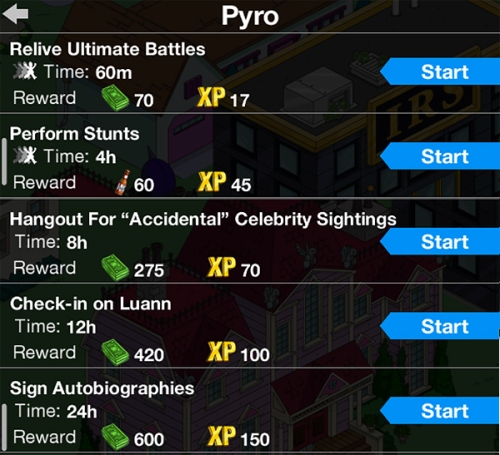 His Indoor Tasks are: At Android’s Dungeon (Autographs), The Van Houtens (checking in on Luann), and Kwik-E-Mart (Accidental  Sightings).

That’s It for the Prizes in Act 1… but now, you can forget about the general tasks, and go back to collecting beer bottles to earn Bonuts! (just like my real life!).

Bonuts
After you’ve finished the questline (basically unlock General Bart and do one
more task) you’ll be able to earn Bonuts.  For every 6,000

Tell us what you think of the Event so far! Are you laughing? Are you confused with why Luann seems to have been with half of the men in Springfield? Let us know what you think!