Episode Reminder: The Incredible Lightness of Being a Baby (Season 31, Episode 18)

Were you disappointed to see The Simpsons off for four weeks? Did you enjoy the last episode? How did it fare for a Marge and recreational drugs episode? Can’t wait for another new Simpsons episode? Well you won’t have to wait too long for the next such episode as The Simpsons is back this Sunday, with an all new episode! Woohoo!

So here’s your official TSTO Addicts reminder…all new episode, the season’s eighteenth episode, this Sunday, April 19th, 8pm on FOX (at the same time on City TV in Canada)….“The Incredible Lightness of Being a Baby”! 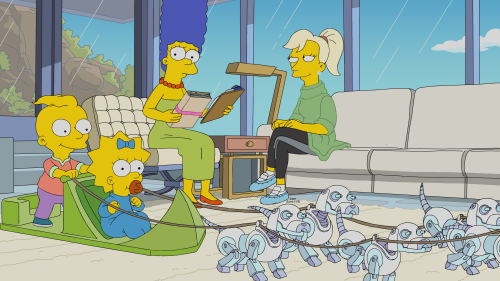 “When Maggie reunites with baby Hudson from Playdate with Destiny, she won’t let her play with her new baby crush because of his annoying mother, leading Maggie into a depressive spiral. Meanwhile, Cletus comes across quite a bit of money and becomes a helium tycoon, so Mr. Burns wants Homer to help him obtain it.”

Here’s a clip from Fox Animations, that also has an important Covid-19 message:

Be sure to tune in tomorrow night to see all the fun! As always, after the episode airs we’ll have a full episode recap!

And as we head into the Mother’s Day and Father’s Day seasons, don’t forget to swing by the Addicts Shop for your favourite TSTO paraphernalia for your warmer weather t-shirts.

7 responses to “Episode Reminder: The Incredible Lightness of Being a Baby (Season 31, Episode 18)”