Where Did THAT Come From: Krusty’s Opera House Sound Clip 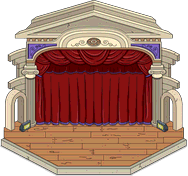 This post is a lil different than the usual WDTCF. I am putting this out there as we are seeing comments pop up asking the following,

“Why does Krusty sing about Rice Crispies when you tap on the Opera House?”

It is a very simple explanation and will make oh so much more sense in the game soon. In the meantime, I will remind you of an episode I covered in the Real Housewives: Francesca Terwilliger.

Season 17, Episode 8: The Italian Bob
While in Italy trying to get a car for Mr. Burns, the Simpsons have ran into Sideshow Bob and he wants to kill them of course. Thanks to Lisa’s drunken outburst letting his new family and town he runs know he’s a criminal.

The Simpsons flee his wrath and try to seek shelter or some kind of safety. Lisa spots a performance advert on a Bus for Krusty playing the role of Pagliacci. 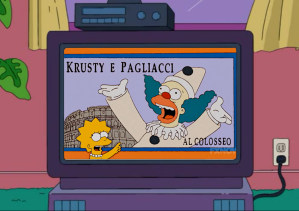 Later they actually go to the Opera House to see his performance and ask him to help save their lives and get them back to Springfield. During that performance, Krusty seems to have ad libbed and changed a LOT of the words. Like singing about… Rice Krispies. Lol. 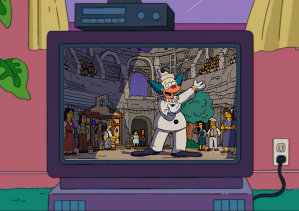 There you have it, a small lil sound byte from a silly episode… of course surrounding the Terwilliger Family… and we now have that clip in our silly lil games.

For those of you that haven’t heard it, or play with your sound off….here’s the Audio File:

What do you think of the sound byte? Did you even notice it? Know where it had come from? Let us know.

This entry was posted in Where Did THAT Come From and tagged Krusty Sound Clip Opera House, Opera House, Pagliacci Krusty, The Simpsons Tapped Out, TSTO Addicts, TSTO Terwilliger Event 2015, TSTO Tips and Tricks, What is Krusty saying at Opera House?. Bookmark the permalink.

35 responses to “Where Did THAT Come From: Krusty’s Opera House Sound Clip”