Where Did THAT Come From – Muscle Marge & Shapes (and L.A. Body Works)

In our silly lil game, we sometimes see things pop in that we have no clue as to their Origin. They seem familiar, but we just can’t pinpoint from where. So that is why we decided to make a fun lil reminder out of it. To let you know just Where did THAT Come From?

So Gil is back at it again with another deal, this time for a character skin and building for 175 of our precious sprinkled treats.  Why would EA add something like this in the middle of the Monorail/Springfield Heights tap-tap-tappery is anyone’s guess but I do have a theory. Like usual, any time something new comes in the game, I’m dredging my brain pan to point it out in the Best. Show. Ever.

First off, I have to point out that EA programmers, like a lot of us, might be lazy. These items tend to come from the same episodes and this case is no different. I actually had a whole post sitting in drafts that bears on L.A. Body Works and when Curves appeared and was all… “Hey… that’s the same episode!”  Add to that Muscle Marge coming from an episode I viewed for the Springfield Convention Center and you get an idea of EA watching an episode, liking different things and then figuring out how to bring them into the game at different times but still close together just to make a certain Fuzzball groan.  Ok… maybe it’s not all about me or an EA vendetta but you get my point.

So I’m lucky to have already pulled screenshots for both of these items courtesy of writing two different posts for Springfield Heights and Level 56.  I only had to trash one and add it to this post so no worries on my part.  Without further words, let’s head off to find our new skin and building with a bonus for SH.

After a new comic book store opens up in Springfield and Marge realizes she’s lost her perfect 26-26-26 figure when she stands behind a Wonder Woman standee, our favorite mommy decides she needs to join a gym. 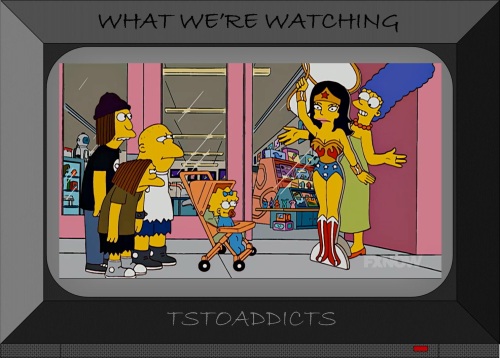 And where would our beautiful Marjorie go to trim down even though she doesn’t need to? L.A. Body Works of course.  Ooooh… L…. A….

It’s a hip place too. Tummy tone with Sasha, Power Bounce with Zack D, Zen Abs with Zack G and Mommy & Me Kickboxing… you’ll get so ripped.

Marge doesn’t dig it though. Not only is walking more difficult then she expected but the showers have clear windows where everyone can see. She wishes there were gyms for normal people.

And what would a gym for regular ladies look like? Yup… Shapes! “No men, no cell phones, no mirrors, no shame.” Serendipitously for Marge, Comic Book Guy put the Android’s Dungeon up for rent.  I guess EA could have made this a skin for CBG’s locale but one skin is enough for a Gil Deal IMHO.  I like the separate building. 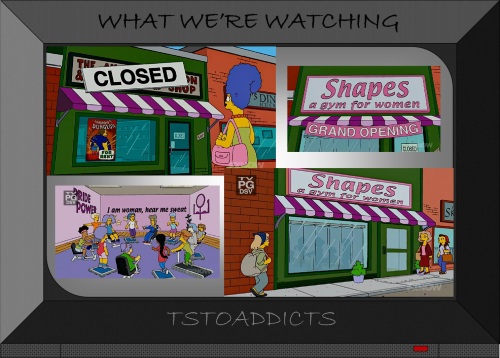 Marge becomes super successful as a result of opening her gym and there’s some funny bits in the episode with Homer worrying she’ll replace him with a newer model but I just think we should all be happy that TSTO brought us the Dungeon version of Shapes and not the Krusty Burger version.

It’s fair to say that once Shapes became a chain of stores, Marge might have opened one that looked like the original. Of course, that does nothing to explain the new skin that came with Shapes. While I’m certain Marjorie B. Simpson could have gotten ripped in her own gym, that’s not where we find her super-toned body.  For that we have to head to “The Strong Arms of the Ma” (S14:E9). Maggie fudges her Huggies and during an emergency changing, Marge is robbed at the Kwik-E-Mart by a weirdo (am I the only one who caught the Batman reference during it?) 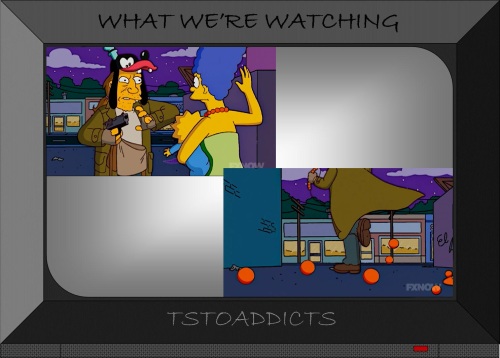 The robbery makes our favorite mother a shut-in and Marge decides it is much safer to just stay in her house and live in the Simpsons basement. While there, she finds Homer’s forgotten weight set, becomes super ripped and outgrows her agoraphobia.  The true payoff is her giving the weirdo robber (complete with Goofy hat) his comeuppance.

Looks just like a new fun animation that comes with the skin.  It actually is a combo of her beating up the Goofy weirdo and the workout outfit she wears later. 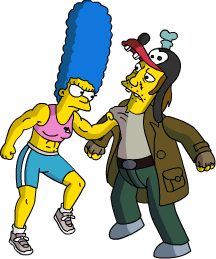 Marge’s keeps on bulking up. With some help from her old pal Ruth Powers, Marge adds steroids to her regimen and becomes a bodybuilder. She even competes in the Women’s Bodybuilding Finals and wins 2nd place.

There’s also a great image of what the interior of her fight at Moe’s looks like. Marge really brings a new definition to roid rage.

And that’s it. The irony of this skin is just the other night I watched the bodybuilder episode and remarked to myself that I’d be fine if EA never brought a Muscle Marge skin into the game. You think they have me bugged? I did buy the deal but have to admit it was mainly for Marge to valiantly beat up her Dizznee-loving aggressor. Anywho… courtesy of Springfield Heights and Ray Patterson’s man-twin (seriously Gil and Ray look a lot alike), we have an uber hip gym that alienated our favorite yellow mother as well as her premium answer to its voyeuristic showers, as well as what happens when she hits the weights and the anabolic sauce. What do you think of all the items? Did you splurge the sprinklies on Gil’s Deal? Earning sweaty mats at a decent rate? Sound off and stay in shape my friends. Round is a shape, right?

11 responses to “Where Did THAT Come From – Muscle Marge & Shapes (and L.A. Body Works)”