Where Did THAT Come From: Longshot Skinner & ROCKS!!

In our silly lil game, we sometimes see things pop in that we have no clue as to their Origin. They seem familiar, but we just can’t pinpoint from where. That is why we decided to make a fun lil reminder out of it. To let you know just Where did THAT Come From?

In this post I will be going over the Origin of Longshot Skinner. (Also… ROCKS! Lots n lots n lots of ROCKS! ) Why is he in our games? What does he have to do with Springfield Wild West? Let’s dive into the Simpsons TV Series to find out more.

***Side Note: The Bart in this one is the other I mentioned that reminds me of The Kid With No Name too.

Season 25, Episode 7: Yellow Subterfuge
This episode opens up in a Movie type daydream scene of Longshot Skinner. The entire opening sequence is stuffed full of images and items you can pretty much imagine to be a part of the Wild West Event. Cactus, Rocks, Lizards, Rocks, Sagebrush, Rocks, Withered Trees, and on n on n on n on. (Rocks!) 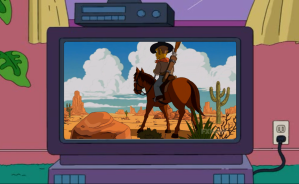 Skinner is “patrolling the school hallways”. Shooting down Dolph before he shoots Skinner with a spit wad.

Dealing with Kearney and Jimbo who are using a cactus to torture Martin… literally blowing their heads off with his shotgun.

He strolls through the town impressing all the kids… 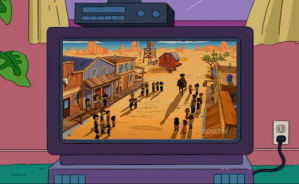 and he even makes Bart spill his milk. 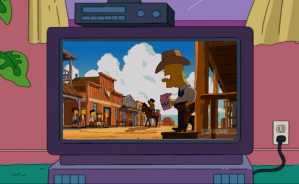 Of course… it is all just a daydream in Skinner’s head while he is waiting for his turn to talk in the School Assembly.

There you have it, just a simple daydream by an Elementary School Principal and now we have Longshot Skinner and some cool Desert themed items in our silly lil games for the Wild West Event.

Do you remember the episode? What do you think of Longshot Skinner? Did you collect enough clues and pick him up? If so, what do you think of his Tasks? See a bunch of other items from this short that you would like for our Event? I know I do! Let us know.

8 responses to “Where Did THAT Come From: Longshot Skinner & ROCKS!!”