Where Did THAT Come From – Cafe Kafka

Wowza… the 2017 Secret Agent Simpsons Event is in full effect and we’re all busy collecting intel, crafting subversive surveillance items, and tapa-tapa-tapping secret agents and spies in a covert palooza all about Globex, the EPA, GHOST, and the CIA. It’s enough to make me want to watch Roger Moore, Sean Connery, Don Adams, and Rowan Atkinson on repeat. Hooray for new ideas in TSTO. Just like the xxth Bond movie, life lessons as an adult, or an intelligence collection mission, I’m sure a lot of us never saw this coming. Of course, with any new event, there’s always an inevitable tapping on my attic floor from Alissa to get started on writing about the origins for it all. It’s always a pleasure to re-watch episodes of the Best. Show. Ever. to do just that. For this round of origins, we’ll be taking a look at Café Kafka, a premium building available for 60 donuts in Act Three of the 2017 Secret Agent Simpsons Event

In this episode, Lisa meets Coach Lugash after failing gym in school. Just like hookers and Spider-man, she’s putting on a leotard to get yelled at. At Lugash’s Gym, Lisa makes two friends named Tina and Carrie that she first mistakes for girls around her age. 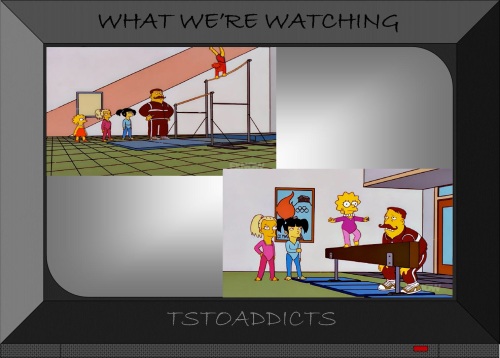 Turns out they just have “small gymnast bodies” and are into classic literature and fractals because of their studies at Springfield University. Thankfully Lisa’s new friends don’t realize she’s only eight and she ends up hanging out with the ladies. 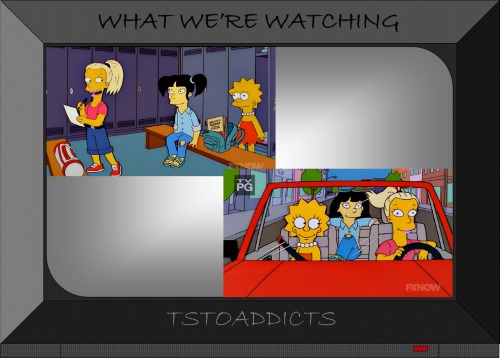 Lisa loves college. Intellectualism everywhere where her intelligence can actually be stimulated.

Her new friends invite Lisa to hang out later at Café Kafka. 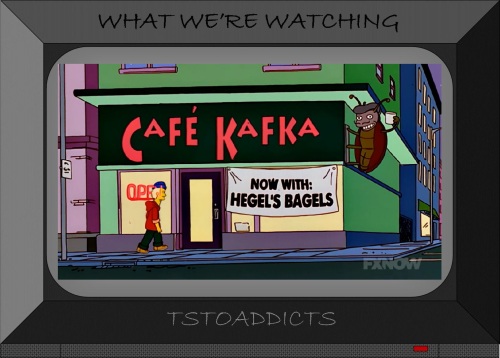 It’s a happening place where former poet laureate Robert Pinsky reads some of his gems about ichor and other poetic stuff. 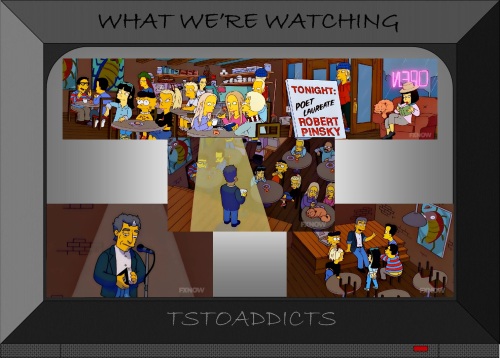 There’s more here too including Bart in a bubble and Panda Virus, whether or not Lisa’s cover is blown, and some greatness involving a white polyester suit and a giant chocolate cake. You should check it out. It’s a pretty neat building with a clever name to add to the game even if it really has nothing to do with spying. I guess Lisa was undercover so let’s go with that for a connection. Harriet the Spy is mentioned at one point too by Database so there you go. What are your thoughts? Did you buy the café? Sound off in the comments and happy spying super spies.

7 responses to “Where Did THAT Come From – Cafe Kafka”