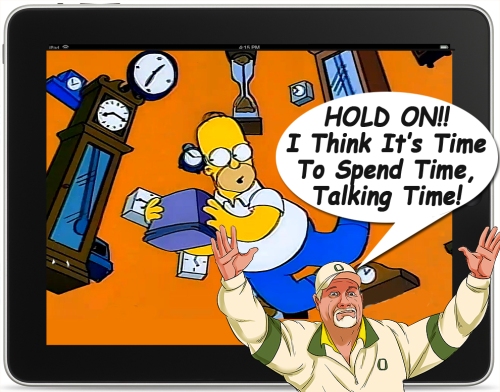 For almost as long as man has been able to tell time (when Grog Smith, mentioned to Ugha Jones that he noticed the sun went down every night), mankind has been fascinated with the concept of time travel.  And even the most erudite theoretic physicists in history have a hard time convincing one another that time may or may not be malleable, allowing us to move to and fro through event horizons of time/space.

Of course, popular culture has all but shredded any real commonsense thought about the possibilities of traveling to or from a single point in time…making us all believe that time is simply a linear string, with knots representing every second, minute, hour, day, and year of existences, that can be used as a road marker, or untied to alter the course of the rest of the string.

But, that is silly…no matter what Dr. Brown and Marty would have you believe.

And while the most brilliant minds in the world are all at CERN, breaking all of the standard rules of physics by shooting protons beyond the speed of light (which in itself destroys the traditional laws of physics), it is widely becoming an accepted theory that there is very clear evidence that much of what we see, touch and feel, is rooted in a dimension that is OUTSIDE this space/time…Time, and any clear definition of it, is more a perception than a reality.

As I have written about for years (as our old friends at TSTOFriends can attest), to me it isn’t really so much the measurement of time, but the value of how you spend that time.  And let’s be brutally honest…there are few activities in this world that can suck up more time, or squander more of that magic “Life Currency” than tapping. It’s been so long ago that I grabbed that phrase, I can’t remember the source. But, I suspect it came during the first Sci-Fi update a LONG time ago.  But, “Life Currency” is such an accurate description of the real value of time, that I purloined (a polite term for stole) it…and have used it since.

However, what if we COULD go back and forth in time?  What if we could “get back that wasted hour or two or five,” if we had the ability to do so?  And, if we became greedy with our time travel, what major life-changing events would we choose to alter to change the outcome of our existence today?  WOULD YOU DO IT???
END_OF_DOCUMENT_TOKEN_TO_BE_REPLACED

Where Did THAT Come From – Heavenly Hills Mall

END_OF_DOCUMENT_TOKEN_TO_BE_REPLACED

Posted in Buildings, Where Did THAT Come From