As many of you know, the third edition of the Bracket Battle is back this summer. This time it’s to determine the most desired building in our Springfield’s. However, this time, we have an added pick’em contest to go along with the Bracket Battle and the Addicts have been kind enough to provide a prize of $10 USD gift card (or equivalent) to one winner from the United States and one International winner.

While it’s too late to enter the contest now, the original contest post with rules can be found here.

A quick recap of the contest:

278 people entered the contest, plus we have four picks that are not eligible for prizes: Namely from our three Addicts and I also made my picks.

We received 179 contest entries from USA; 28 from Canada; 21 from UK (I included those who entered England, Scotland, Wales and Northern Ireland as UK); 9 from Australia; 5 from Germany and the Netherlands; 4 from Spain; 3 from Ireland; 2 from Austria, Belgium, Hungary, New Zealand, Slovakia, South Africa, and Sweden; and 1 entry apiece from Brazil, Czech Republic, Hong Kong, Macedonia, Mexico, Pakistan, the Philippines, Poland, Singapore, and Thailand.

But we’re all Addicts and the picks we made must all be the same, right?

So how am I doing so far?

Here is the Leaderboard after Week 8 and with the end of Round 4 Quarter-Finals, sorted by points then alphabetically by name: 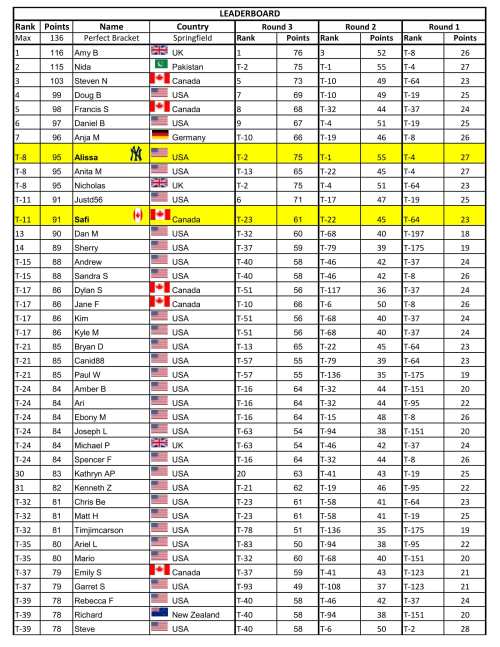 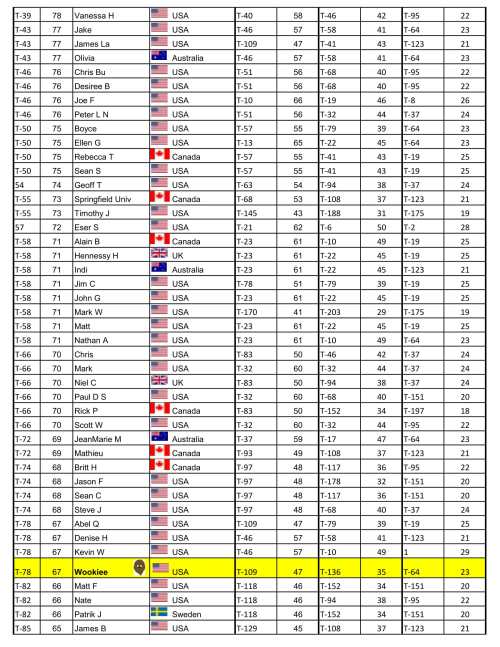 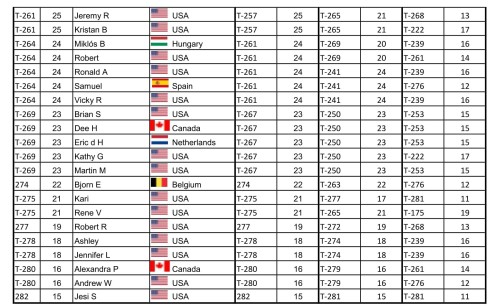 Congrats to Amy B (UK) who maintains a one point lead over Nida (Pakistan) for sole possession of first place. After the end of Round 4, Amy B has 116 of a maximum 136 points.

Another special shout out to Amy B (UK) and Nida (Pakistan) who were the only two people to correctly predict all 4 Semi-Finalists and to earn the maximum 40 points in Round 4!

So who picked who in Week 8? 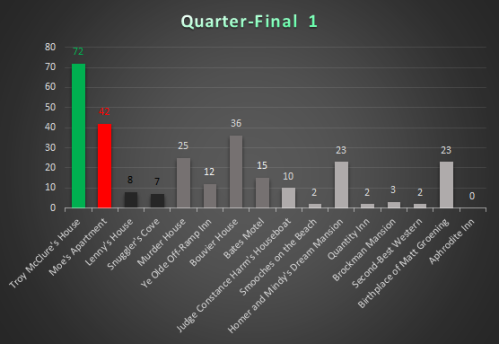 Restaurants #2 The Pretzel Wagon (59% – 733 votes) defeated Bars/Clubs #3 CBGB (41% – 509 votes) in the Bracket Battle. Only 33 of the 282 entries (11.7%) predicted Pretzel Wagon to win this Quarter-Final [so pat yourself on the back if you’re one of them]. Quarter-Final runner-up CBGB had the tenth most entries and was predicted by a mere 8 people. The most popular pick, predicted by 52 people was The Slaughterhouse. Next, 50 people predicted Round 2 winner/Round 3 disqualified The Jazz Hole. 30 people predicted Round 2 loser Krusty Fried Chicken and Round 1 disqualified League of Extra-Horny Gentlemen. 21 people predicted Round 2 loser Kentucky Fried Panda. Not one person thought Round 1 loser One Night Stan would win this Quarter-Final, because we all knew EA would give it to us as part of Pride Event 🙂 . 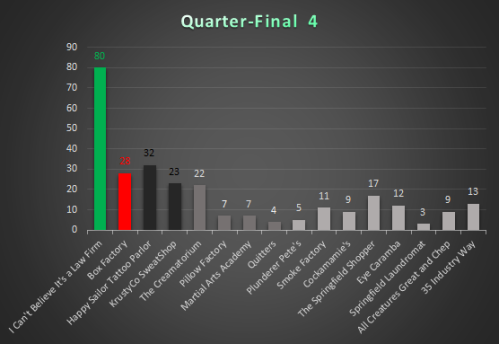 Well that’s it for this weeks pick’em contest leaderboard recap. With Round 5 correct predictions being worth 20 points each, don’t forget to vote on the Week 9 Bracket Battle matchups here. Voting is open until noon eastern this Thursday. And be sure to come back this Friday evening for Round 6 when the final Week 10 Championship matchup goes live.

How is your Bracket going? What did you do right and what did you do wrong? Are you doing better than the Addicts? Did points going up to 10 help or hinder you? You know we love hearing from you!