is Sungazer Studio and Peter D’Abbruzio, because you can have Rock and Roll without a mullet sporting rocker?? 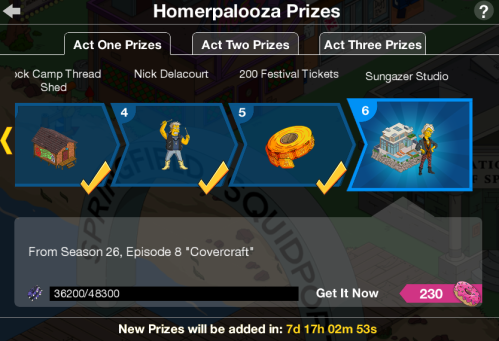 END_OF_DOCUMENT_TOKEN_TO_BE_REPLACED

Should I Spend Donuts on the Tailgate, Garbage Can Pack, Wavy-Arm God or Elder Blimp?

Hope you’ve got your dancing shoes on and your cell phones ready to light up the night because Homerpalooza has arrived in Springfield!  That’s right the rock fest has begun!  Our stores are now jam-packed with premium items just tempting us to drop our sprinkles on!

Of course with that limited-time label it can be tempting to grab everything in sight because it’ll be gone soon.  But don’t sweat it!  That’s where we come in to tell you what’s worth those donuts and what you might want to hold off on.

Wondering if you should add Tailgate, Garbage Can Pack, Wavy-Arm God or Elder Blimp to your Springfield?  Well before you hit that confirm button let’s break down the pros and cons of adding these throwbacks to your town…

END_OF_DOCUMENT_TOKEN_TO_BE_REPLACED

Posted in Decorations, Donuts, Should I Buy, Tapped Out, Tips and Tricks, Updates

Today marks the official 4 year anniversary of when TSTO Addicts was officially launched!  We’re completely blown away by the AMAZING community of readers we have here at TSTO Addicts.  We absolutely love what we do and really appreciate all of YOU!

Of course we’re no strangers to celebrating an anniversary around here!  We celebrated every anniversary on this site, no matter how big or small. (including our 1 month blogiversary way back when!)  We’re always celebrating little milestones with each other and we LOVE to share the bigger ones with you guys!   After all YOU guys are the heart and soul of this community….and we wouldn’t have it any other way!  (plus who doesn’t like a good party?!)  So pop the champagne, break out the noise makers and let’s get to celebrating already!

I just wanted to take a moment and say thank you to our wonderful readers and share a few thoughts on Addicts turning 4!  END_OF_DOCUMENT_TOKEN_TO_BE_REPLACED

Posted in Addicts News, Tapped Out

Rock Act Is Nearing the End…

Once the Act 1 is over you will no longer be able to earn Rock Prizes for free. So get everything you can before it’s all gone! (but remember to keep earning cuffs if you haven’t unlocked all of the prizes because the closer you get to unlocking the next prize the lower the donut cost would be should you need to purchase it when the next Act starts…)

Crafting will STILL be available in the next Act  As will the Tickets you’ve accumulated.

For a rundown on everything that was included with the Rock Act check out our rundown post here.

Posted in Tips and Tricks, Updates