Another day, another Mystery Box arrives in Springfield!  This time, it’s a Valentine’s Day box full of Valentine’s/Date Night themed goodies from years past!

This is a premium box full of your chance to get those limited-time premium character/building/decorations with a Valentine’s/Date flair to them.  By now we should all be familiar with how Mystery Boxes work, so let’s jump to the breakdown of what’s inside…

And…if you already have everything in the box you won’t see the box in your store. 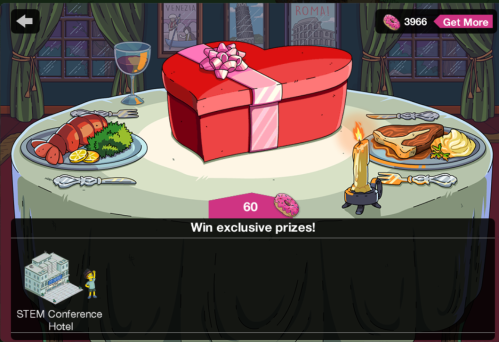 So for 46 donuts you can have your shot at a variety of Valentine’s/Date Night  inspired premium characters, skins, decorations and buildings from the past,  60 Donuts is equal to or less than the initial value for each item (although some were initially prizes, so they were free when released)

Here’s what you can win…

Now, while I know you can’t pick and choose which items you want from the box, I included the Should I Buy (or details) posts from the past so y’all can see how much they originally cost & what specifically each building/character does.

60 donuts is a fair price for most of the items at least.  So my thoughts are, if you have something in there you want…give it a try.  You’ll likely get something worth it.

And that’s it my friends!  The details on the Date Night Mystery Box….

What are your thoughts on the Mystery Box? Have you tried it yet? What have you won so far? What do you hope to get? Sound off in the comments below, you know we love hearing from you!

This entry was posted in Buildings, Characters, Decorations, Donuts, Mystery Boxes, Should I Buy, Tips and Tricks, Updates, Valentines 2018 and tagged Bart Royale Event, How Do I Get Brandine, how do i get jacques, how do I get mindy, how do I get mona, How do i get shauna, Howard's Flowers, phinneas q butterfats, Should I Buy Date Night Mystery Box, Tapped Out Tips and Tricks, The Simpsons Tapped Out, TSTO Addicts, TSTO Bart Royale, TSTO Homergeddon, TSTO Tips and Tricks, TSTO Valentine's Day, Valentine's Day 2018, Whats inside the Date Night mystery Box. Bookmark the permalink.