Where Did THAT Come From – Painless Dentistry

Wowza… the 2017 Secret Agent Simpsons Event is in full effect and we’re all busy collecting intel, crafting subversive surveillance items, and tapa-tapa-tapping secret agents and spies in a covert palooza all about Globex, the EPA, GHOST, and the CIA. It’s enough to make me want to watch Roger Moore, Sean Connery, Don Adams, and Rowan Atkinson on repeat. Hooray for new ideas in TSTO. Just like the xxth Bond movie, life lessons as an adult, or an intelligence collection mission, I’m sure a lot of us never saw this coming. Of course, with any new event, there’s always an inevitable tapping on my attic floor from Alissa to get started on writing about the origins for it all. It’s always a pleasure to re-watch episodes of the Best. Show. Ever. to do just that. For this round of origins, we’ll be taking a look at the 3rd Act Three Prize for 24,950 corporate intel… Painless Dentistry.

“Come gather round, children, / It’s high time ye learned / ‘Bout a hero named Homer / And a devil named Burns.
We’ll march ’till we drop / The girls and the fellas. / We’ll fight ’till the death / Or else fold like umbrellas.
So we’ll march day and night / By the big cooling tower. / They have the plant / But we have the power.”

There’s really no other way to describe this episode than Lisa’s union strike folk song. This is a classic episode from what I consider the best season of The Simpsons. I guess I could repeat Dental Plan & Lisa need braces over and over again also but I’ll save you from that. I mean how many times can you repeat Dental Plan & Lisa needs braces? Fans of the Best. Show. Ever. must know this is the Homer leads the Nuclear Plant Union episode and is about a dental plan and Lisa needing braces, right?

So without belaboring a point to far… Lisa needs braces and Homer ends up in hilarity to keep the dental plan from his job available. No surprise that Burns is anti-union. He has been since the olden days were his grandfather jailed people for accidentally taking atoms home with them. Painless dentistry shows up quite early in the episode after Burns decides to target the dental plan. No surprise. After all, how else can we find out that Lisa needs braces?

It’s the place that Ralph Wiggum turns into a house of lies. So necessary to happen so we can laugh at the Big Book of British Smiles.

Also hilarious to see Dr. Wolfe’s recreation of what may happen to Lisa’s teeth at ages 11, 14, 17, and 18 if she doesn’t get orthodontic realignment.

Homer doesn’t worry initially about paying for the braces since the plant won a dental plan in the strike of 88 when Homer got a scar for demanding a burrito. Of course, with the plan in question, they can’t immediately get the painless and invisible ones that “periodically release a delightful burst of Calvin Klein’s Obsession… for teeth.” They have to go for the affordable option that pre-date stainless steel. Bring on the scraper, the poker, and the happy little fellow called the gouger.

There’s a great Beatles-influenced dream sequence but my favorite scene is the homage to Tim Burton’s 1989 Batman.

Poor Lisa. This episode honestly let me know at the tender age of 12 that I never wanted braces. Well… this episode AND and watching my cousin cut up corn off the cob.

I have to insist you watch this episode involving the International Brotherhood of Jazz Dancers, Pastry Chefs, and Nuclear Technicians as they strike under the leadership of firebrand Homer Simpson to preserve their benefits. Crusher, Low Blow, a thousand monkeys, a 1960s Batman scene, a vulture that looks like Burns, and even a Grinch-inspired scene… there is so much funny here that I refuse to spoil anything further. All in favor? All opposed?

That’s it for this origin. Did you remember the episode? It was a joy to revisit this gem and I’m pretty pumped to have a reminder of it in my Springfield as a prize. What are your thoughts? Sound off in the comments and happy spying friends.

TSTO Reader Mr. Black pointed out that there’s a really similar business that goes way back to the original opening sequence of the Best. Show. Ever. We’re talking “Bart the Genius” (S1:E2) way back. Check out Semi-Painless Dentistry located above Howard’s Flowers. Thanks to Mr. Black for pointing it out. 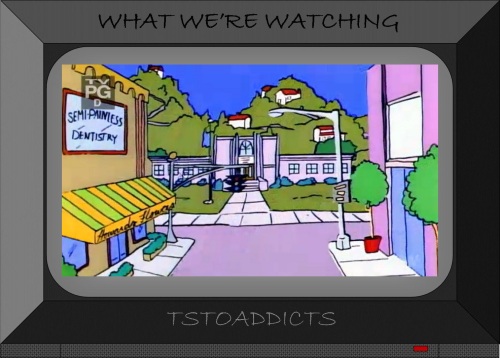 8 responses to “Where Did THAT Come From – Painless Dentistry”