Where Did THAT Come From – Homer’s Workshop, Dinosaur Lake, Pterodactyl Nest, Darwin Fish, and Bart Sphinx

Today we live in a world of wonders and things that just make you wonder. “But it wasn’t always that way. Quiet now, as we travel back in time. Back to the fantastic Primeval World – land of the dinosaurs.” Yes that’s right folks… an event full of dino DNA… or at least stuff that dinosaur loving people like me love. Woohoo for new things in TSTO! As usual, when new additions arrive in the game, there’s always an inevitable tapping on my attic floor from Alissa to get started on writing about the origins for it all. It’s always a pleasure to re-watch episodes of the Best. Show. Ever. to do just that after I blow the Cheetos dust of my furry fingers so I don’t gum up my key board. For this round of origins, we’ll be taking at items from the Act One of the 2017 Time Traveling Toaster Event:

So of all the things in this time traveling toaster event (how great a name is that?), the one that inspired this the most is obviously said toaster. To find that… we head to the “Time and Punishment” segment of “Treehouse of Horror V” (S6:E6). Homer hasn’t forgotten an anniversary here but courtesy of getting his hand stuck in the toaster and beating it off times two, Homer finds himself in his workshop to repair the darned thing. 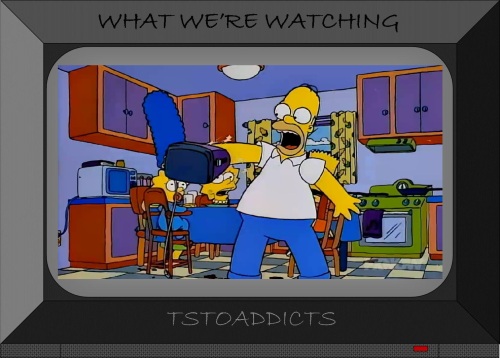 Homer’s fix is interesting too. All it took was a rock and Jebus knows what else. While taking it for a test toast, Homer discovers he’s created a time machine!

It might be the Disney nerd in me but I always think of this as the primeval world. Homer describes it as “a time when dinosaurs weren’t just confined to zoos.” We see the dinosaur lake right away. While we don’t see a pterodactyl nest per se, there are plenty of them flying around which look just like the winged dino in our games. Even squawks like him.

Homer accidentally slaps a mosquito which results in a future where Ned is unquestioned lord and master of the world. D’oh! Bring on Homer going back and forth thru time to fix things. Nothing like being scared by a T-Rex and accidentally sitting on the Darwin fish.

Or sneezing on a T-Rex causing the extinction of the dinosaurs. Homer changes all manner of things which leads to a montage of what his dinosaur age wrecking douse to the Simpsons home. It’s seen as the Flinstones home, a classic Mickey Dees, as a giant Shoe, underwater, AND as a sphinx with Bart’s face on it.

Pretty cool. I’ve always loved this little segment if only because of a love of dinosaurs since childhood but also because of the Ned-ful dystopian future and a land where it rains donuts. Did you remember all of this stuff from the episode? What do you think of it all? Wish Homer’s workshop was something you could see from inside the garage? Sound off in the comments and happy time traveling tapping friends.

10 responses to “Where Did THAT Come From – Homer’s Workshop, Dinosaur Lake, Pterodactyl Nest, Darwin Fish, and Bart Sphinx”