Where Did THAT Come From – Springfield Jobs Act 1 Characters!

Safi here, giving Wookiee a hand with these WDTCF. With WDTCF being a staple of TSTO Addicts, I’ll try to keep as true to the format as possible (by which I mean I’ll copy and paste one of Wookiee’s posts and just change the necessary info). Hope I make the Wookster proud. Enjoy:

It’s Springfield Jobs time here in all of our tiny tappable towns and my “job” is to tell you where those characters, buildings, and decorations in your “Springfield” came from.

It’s time for one of my favorite parts of being a reader here at this amazing site. That’s right… new stuff for us to talk about just WHERE it all comes from in the Best. Show. Ever. I’m always a fan of new things even though a lot of the coolest things cost precious sprinklies. It’s always a pleasure to re-watch episodes of the Best. Show. Ever. For this round of origins, we’ll be taking a look at the Characters released in Act 1 of the 2018 Springfield Jobs event:

Aristotle Amandopolis is the owner of the Shelbyville Nuclear Power Plant, as well as the rival of Charles Montgomery Burns. He has appeared in four episodes.

During a near-fatal meltdown at The Springfield Nuclear Power Plant, Homer frantically presses buttons on his console until he hits the right combination and saves the day. Burns introduces Homer to Aristotle “Ari” Amadopolis, the owner of the Shelbyville Nuclear Power Plant. Ari wants Homer the hero to give a pep talk to his plant’s lackluster workers. Homer is hesitant to accept, but Burns forces him into it.

As Homer gives his fumbling “motivational” speech, an impending meltdown threatens the Shelbyville plant. The crowd marches Homer to the control room, asking him to perform his heroic deeds once again. In front of everyone, Homer repeats his juvenile rhyme and presses a button blindly. By sheer dumb luck, he manages to avert this meltdown as well.

To secure victory in the game, Burns wants to hire major league stars, but Smithers tells Burns that the players he picked are all dead. Thus, Burns orders Smithers to locate some current superstar players and hires several Major League Baseball players to work at the plant (Roger Clemens, Wade Boggs, Ken Griffey, Jr., Steve Sax, Ozzie Smith, José Canseco, Don Mattingly, Darryl Strawberry and Mike Scioscia) and to play on the team, much to the dismay of the plant workers who got the team to the championship game in the first place..

Marge’s old prom date Artie Ziff returns to Springfield, having lost his fortune and his Internet business, and asks to stay with the Simpsons until he gets back on his feet. Homer takes Artie (voiced by Jon Lovitz) to Moe’s, where all the other characters voiced by Jon Lovitz, including Aristotle, are having a drink. 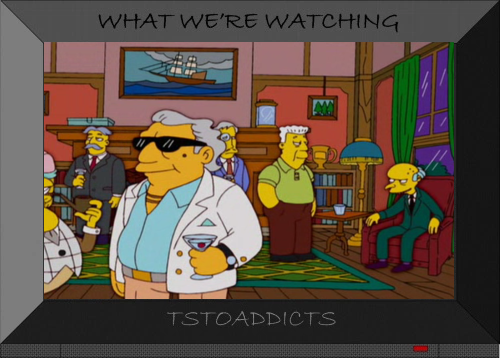 In this Emmy nominated episode, on a family outing inside Carl’s Dad Caverns, Homer causes a stalactite to crash into the ground, and he ends up stuck in a hole. While Marge, Bart, and Maggie look for a way out, Lisa stays behind and tells Homer a story about how she was chased by a ram and ended up in Mr. Burns’ attic…where he tells the story of how he loses everything to the Rich Texan and has to work his way back up from the bottom, starting at Moe’s…where he discovers Moe’s story of how he met the perfect woman, Mrs. Krabappel, but the only way he could afford to start a new life with her was to steal a bag of gold coins discovered by the archaeologist Professor Jailbird, who would then commit to a life of crime and be known as Snake.

It’s during Mr. Burns story where he recounts that he is part of the exclusive Excluders Club that we catch a glimpse of Aristotle.

Dante Calabrasi, Dante Calabrasi Jr., and Primo are part of the Calabresi crime family which was a rival of the Springfield Mafia. 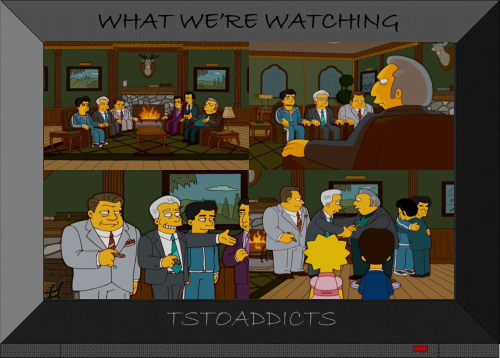 At school, Lisa befriends Fat Tony’s son. After school, Fat Tony drives the kids home, but on the way, goons working for the Calabrese family, Fat Tony’s opponents, attack them. At Fat Tony’s mansion, the Calabreses come unexpectedly for a sit-down during dinner. Fat Tony advises the Calabreses against killing him as his son, Michael, would then take his place and exact a brutal vengeance. Meanwhile, Michael serves souffles to the Simpsons. He then provides them to the mobsters, who love the dish, but are surprised when they find out he made them. The Calabreses laugh at Fat Tony and leave. Fat Tony admonishes Michael for making him look weak in front of his enemies. Suddenly, an attack helicopter (piloted by the Calabreses) appears at the window and guns Fat Tony down. 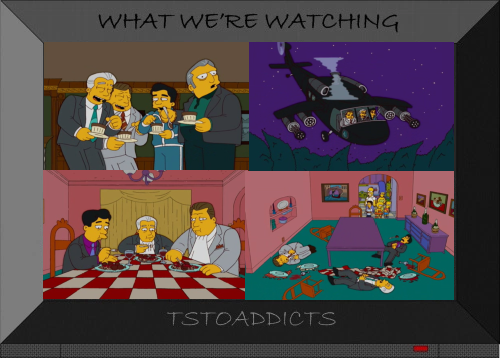 One evening, Michael invites the Calabreses to the Simpsons’ house for dinner, where he tells the that they have won and that he is out of the family business. They applaud his solution, but end up choking and dying over their own meals. Marge discovers that the food had been poisoned, and Michael appears remorseful. Then, at Fat Tony’s mansion, Fat Tony congratulates Michael for his good deeds. Outside the bedroom, Lisa asks Michael why didn’t he tell Fat Tony it was just an accident, although she suspects that it was not quite so. Michael tells Lisa, à la Michael Corleone, never to question his business. Michael then walks into the next room and is chaperoned by Jimbo, Dolph and Kearney, who close the door on Lisa a la Godfather. 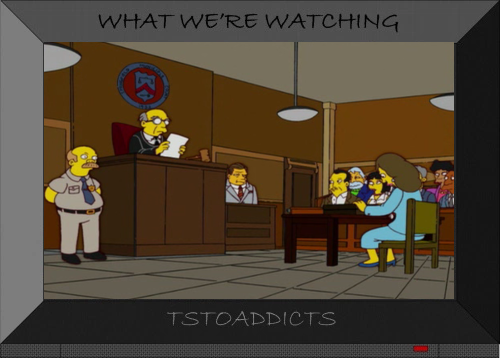 Declan Desmond films a documentary about the lives of people of Springfield and how they changed over the years. In the film of Eleanor Abernathy’s (Crazy Cat Lady) life, Big Alberto was seen on trial when Eleanor was a successful doctor and lawyer.

Homer is sentenced to ten years in jail. The FBI offers him a deal, so he agrees to infiltrate Fat Tony’s mob, undercover. We catch a glimpse of Primo on the FBI’s research board that they’ve been compiling over the past 20 years, moments before Homer accidentally knocks it down into the paper shredder.

Lisa is seeking summer opportunities and settles on traveling to Italy. When she goes to meet with Principal Skinner, it turns out that Lisa meets all the requirements except for one: you have to be fluent in Italian. Lisa tries convincing Principal Skinner that she’s fluent in Italian, but the principal is skeptical. Rather than putting her on the spot, he decides to test Lisa later. This gives Lisa time to hire a tutor, who turns out to be Milhouse.

Milhouse reveals that his grandmother lives in Italy and that ever since he was a baby, he spends two weeks out of every summer with his Nana. Milhouse turns out to be an excellent tutor and, before long, Lisa’s speaking fluently in Italian and ends up developing affection toward Milhouse. However, just as it seems that Milhouse’s unrequited feelings for Lisa would be reciprocated, he is caught with a girl named Angelica and then Lisa starts beating him up like his Nana did.

Sven Golly was a hypnotist at the circus.

Marge plans to spend the day at the circus with the family. When at a hypnotist tent, Homer is hypnotized into thinking he is ten years old and before the hypnotist Sven Golly can undo the hypnosis he runs off to escape an arrest by the police. Homer is stuck thinking of being only ten years old. Sven is eventually captured and restores Homer to an adult. After being jailed, Sven escapes by tricking Chief Wiggum into thinking that they have switched identities. 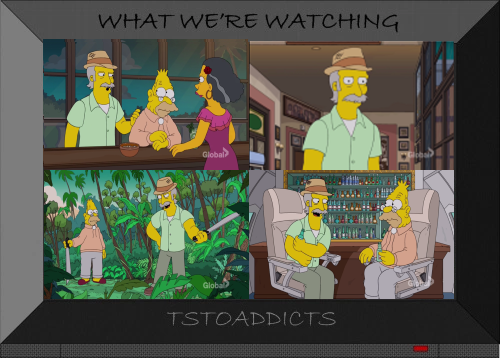 When the Retirement Castle and the V.A. Hospital can’t solve Grampa’s health issues, the Simpsons plan to take a family trip to Cuba to get cheap medical care.

At a bar in Havana, Abe meets a waitress who wants to hook up with him later. He also encounters an old friend from the army, Wheels McGrath, who takes him to see a plane that he hijacked. Wheels wants Abe to join him for a party he’s throwing inside the plane for other war veterans hiding in Cuba. The bar’s waitress shows up and seduces Abe into the cockpit, and reveals that she is a secret agent working for the CIA to transport these fugitives back to Miami.

The Pope is the Bishop of Rome, the leader of Catholic Church and ruler of Vatican City.

While the Pope has made numerous appearances and been mentioned several times, going as far back as “Oh Brother, Where Art Thou?” (S02, E15) to as recent as this season’s “Haw-Haw Land” (S29, E10), none of the appearance really resemble the Pope in our game.

The closest resemblance would be “The Mansion Family” (S11, E12), where he is seen at the Mayo Clinic along with Mr. Burns and other famous individuals getting surgeries.

So there you go… The characters from Act 1 of Springfield Jobs. Did you remember the episodes the characters came from? Any episodes I missed? Who was your favourite character in Act 1? Splurge your donuts on the premium characters? Sound off in the comments and happy classy tapping friends.

TTFN… Safi, in for Wookiee, out!

6 responses to “Where Did THAT Come From – Springfield Jobs Act 1 Characters!”