Where Did THAT Come From – Testoster-zone

So with the Tap Ball Event, all sorts of new stuff has appeared in our games. Act III brought us more prizes to be earned by collecting pennants.  The first of the five was the Testoster-zone. I’m stoked another item I asked for got in the game. Of course, I thought it’d be an interesting addition during Valentine’s 2014 but better late than never. But what does a building with a punny name have to do with Best. Show. Ever.? When and where did it actually appear? Only way to find out is to blitz our way right into the Simpsons TV Series.

So here’s the gist… it’s Valentine’s Day and this episode entails another love interest for Lisa. It’s also the episode that brought us the Mythcrackers paody of Mythbusters. Neither of those really have to do with our new item. After Milhouse singes of his eyebrows and confirms he’s not cool, we see Marge give Homer his VD present. She wants him to have a fun night doing guy stuff. She has him take Bart with him and the boys head off to the batting cages at Testoster-zone. 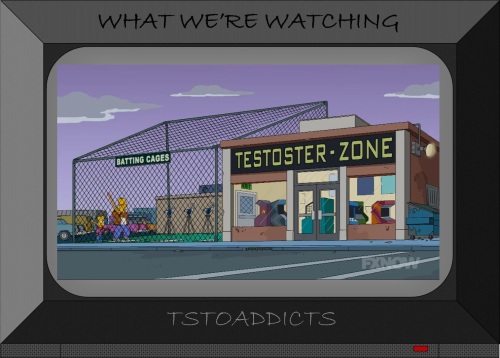 “That’s right sucker. It’s Valentine’s Day and I’ve got a date with some fast balls.”

Bart and Homer have a ton of fun there too. Hitting each other with the pitching machines, video games, air hockey… it’s a cool place and now it’s in our games as the first Tap Ball prize in Act III.

What’s your opinion? I think it’s hard to find fault in a free building with a witty name but I love puns AND The Simpsons so what do I know. Hope y’all have had a great Tap Ball Event. Stay classy and much love.

7 responses to “Where Did THAT Come From – Testoster-zone”