Gooooood mooooorning Tappers!  Who’s ready for another round of Bart Royale?  Act 3 is upon us…so have at it my friends…

Remember…this is an automatic change in your game.  Nothing to download, it should just start up in your game..

Homer gets things going for you with a  6s build, this will be followed by having the Adults and Kids attack the newest base for 4hrs.

Act 3 Runs until March 6th (when the event ends)

Just what does Act 3 have in store for us?  Let’s take a look…

So the ability to earn Colas is now gone.  Your counter prize track for Act 3 has reset to zero because you have zero Gas Cans.  So forget about that buzz…time to light it up with gas cans!

You’ll earn Gas Cans very similar to how you earned Cola during Act 2….

If you didn’t collect them all… you can still access them by tapping on the “ACT  2” tab in the Personal Prizes area. As you can no longer collect items for them, your only option now is to pay donuts to outright buy each one left at the point you left off at. (Just like every other event recently.)

HOWEVER, two new items have been added to the Crafting List.

Both items pay a Defensive Bonus 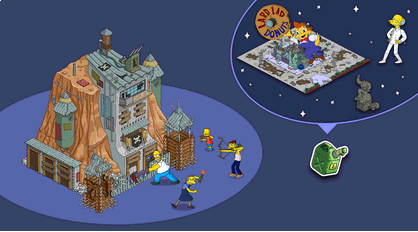 New Fort is available at the start of Act 3.  The Ruffian Fort.  It’s free and a 6s build, but you’ll have to do all of the same things with this fort that you did with the Junk Base.

New Items in the Store..

That’s all that was added today.  But as we’ve seen through events, more stuff will be added on a daily basis.

And before you ask…

So be patient, the info you need will be up soon. 🙂

And that my friends concludes the quick rundown of Act 3!

Remember this is just a quick rundown…as we have time to play through the Act ourselves we’ll break everything down in more detail.

Thoughts on Act 3?  Just like you pictured it?  Excited about these prizes?  How’d you do with your Act 2 prizes?  Will you be buying any of the new premium items? Sound off in the comments below.  You know we love hearing from you!