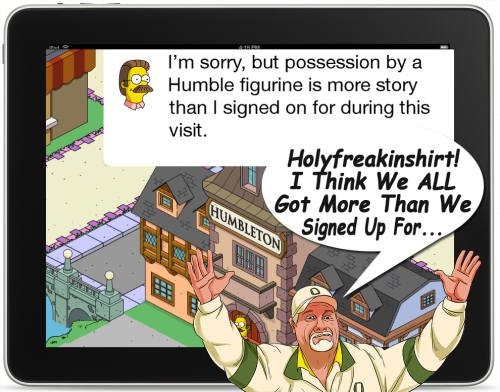 I think the old saying goes, “You can’t pick your family, but you can pick your nose.”  Or something like that. But, the reality is (and has been since there was family) you may be related by blood, but you may not be friends with members of your family.  In other words, it comes down to that other old saying, “I love you, but I don’t LIKE you right now.”  I hear that more and more these days as politics and religion become the unsocial side of social media.

However, in our game,  Family, Politics, Religion and all sorts of other related topics became fair game…and the writers did themselves proud, with some of the funniest dialogue in years!

I’ll dive into some of it, right after I answer this question.  “Since when are “mini-events” (which Flanders Family Reunion Clearly Is) two weeks long???”  The answer?  Since EA and the writers have decided to stretch everything out, in order to make less work for “the team.”

EALP or SLAW?  You decide.
For those of you who forgot, EALP (stands for EA Lazy Programming).  And the new one, SLAW? (Simpsons Lazy Ass Writers).  I have only added this acronym after watching the writer’s interview, where they readily admitted that the delays in updates may be coming from their lack of inspiration to write the dialogue.

As it pertains to this update, it feels like a little of both. There are random items that don’t really belong to the “theme,” that feel like EA already may have had “in the can.” And, there is culpability in the writers providing dialogue that kind of links it all up. Kinda.

I would love to finally get inside of the process a bit more, and understand if the writers come up with ideas for content (“Hey! Look! Safi has another Bracket Battle!  Who haven’t we used yet?”) or if there is a bunch of stuff that is already programmed and designed by the EA staff, that they just want to get off of their work servers? But I digress…

The dialogue for this event was just…plain…funny! From the battle between Evangelical-vs-Episcopalian, to the hilarious differences between Americans and Canadians, I kept laughing again, and again.

Here are a a couple of my favorites…

But this is my favorite. It reminded me of the time my friend’s mom got into some brownies that he had prepared for a camping trip.  She thought she was having a stroke…she at four. Holyfreakinshirt! 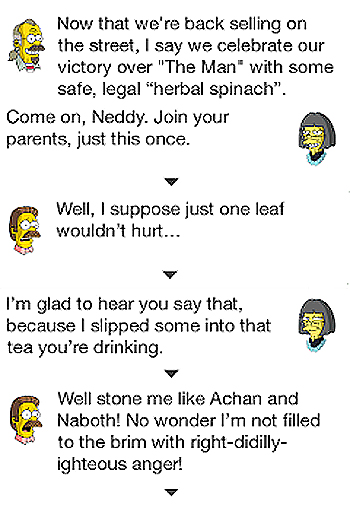 My least favorite bit was the aforementioned randomness of the whole Humbleton side story. Escape a family reunion by going to a figurine store…that has a possessed figurine?  Sooooooooo Stupid…. 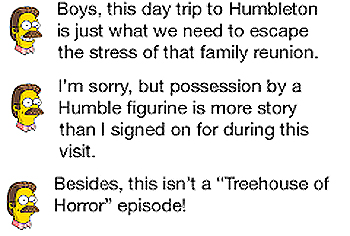 That one made me wonder if the writers had been hitting the wacky weed a bit too hard themselves!

So…family reunions. Such an interesting concept, and something that does take a lot of effort, especially if you have a big family.

For me, up until just a few years ago, all family gatherings were decidedly FEMALE Affairs.  Coming from a family of 3 sisters, from a Dad who had three sisters, with only 1 boy out of my Mom’s side with tons of female cousins, and then having several nieces from my sisters…followed by me having FIVE DAUGHTERS… you get the picture. At one point it was ratio of 29/4. So yes…I was a bit of a genetic fluke. It’s lucky I wasn’t born with a tail.

Then the grandsons started showing up.  So elated was I to have a grandson, and then another, that I wrote this song to celebrate the turn in genetics!

With all of these successful girls, have come careers that have scattered them all over the country. So, our “reunions” are mostly one-on-one, or extended stays with grandpa and grandma, or us going there.  Yes..we have the annual “Miller Golf Tournament,” but it’s not the same as one-on-one with the kids.

And believe me…once again, when grabbing some snaps from this time of the year, when we do most of our visiting (Deb gets summers off because she is a teacher), you see just how fast time flies…and how much the kids change in a blink of an eye.

This shot was taken when Zach and Andrew were just 10 and 8…about the time that I started blogging for TSTO.  Nothing  says happiness, like a frosty mug of  root beer!

Follow that up…with a pic from their recent visit to hang with Katie, Jake and his brothers (Austin and Brandon came as a package deal when Katie married Ryan...the more boys the merrier!). 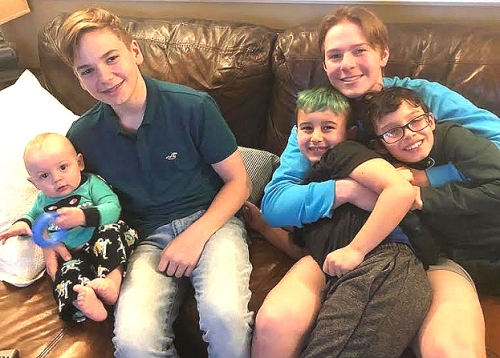 And how about these two little peanuts…shot just a few years ago… Andon and Olivia…now…the ONLY girl grandchild! So cute…so grown up!

We are going to see these two this weekend. Do they love seeing us? This vid is from the last time we visited…this was our welcome...you tell me.

So yes…family is important. And we are blessed with a huge, extended group of kids and grandkids who love us (and may even take me in when Deb has had her fill of me).

Oh…and finally…the random word of the day…Fripperies?
Here is the definition of the word, Frippery:
frip·per·y – /ˈfrip(ə)rē/
noun
plural noun: fripperies
1. showy or unnecessary ornament in architecture, dress, or language.

Wow…so, even using the word Frippery in a TSTO Blog may in fact be the very definition of frippery!  You gotta love the irony in that.

Have an outstanding weekend.  Next week…I’ll give you an update on the horrendous, and very much overdue remodeling projects I am doing this summer in preparation for my wife’s hip surgery on August, 12th.  Trust me…when they built this house in 1971…there was no Frippery involved. Just a load of shoddy, crappy, lazy-ass workmanship.  Maybe their kids ended up being programmers at EA!  (*rim shot*).

21 responses to “Friday Filler – Of Family, Friends, and Fripperies”