DID – Dealing with Stuff that Doesn’t Belong – Castles 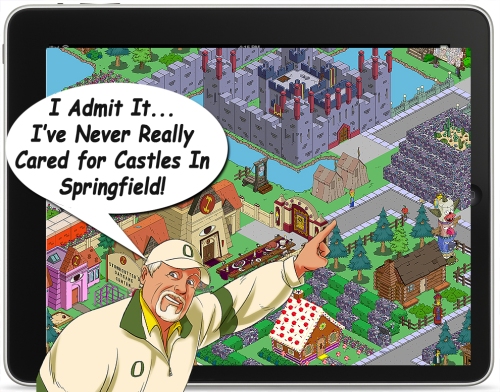 In this issue of DID (Designing in Downtime) I am going to cover a widely debated topic, that divides the True Simpsons Fans from the TSTO Gamer types. I am going to write about Castles…and other things that are “Non-Canon.”

First…let’s define the term “Canon” as it pertains to this use. According to Wiki, “In fiction, canon is the material accepted as officially part of the story in the fictional universe of that story. It is often contrasted with, or used as the basis for, works of fan fiction”  In other words…it is the factual basis of a fictional reality. (man…I loved writing that line…so ambiguous!).

In the case of TSTO…it pretty much just means, “Did it appear in an episode?”

But, for many, at least in TSTO, the Canon freaks (I may be one to a point) simply wanted to make sure that the buildings were actually IN SPRINGFIELD (appeared in the show).  This gets wiggly when The Simpsons does an homage to another show, or another era…other than the “now” of the regular Springfield.  But, let’s face it…”now” is pretty damn relative. Bart’s been 8 for 30 years.

Let’s take a look at the FIRST REALLY Non-Canon blast, that forced us to suspend Canon Law in TSTO…and believe that the game was coming to an end.

August 19th,  2014, FIVE YEARS AGO, and barely 2 years into the game’s existence, we got the much loved/hated Clash of Clones event.

Those of us who disliked it,  thought that it was just the writers trying to belittle the game “Clash of Clans” which had dethroned TSTO from the top of the mobile app downloads.   Plus…it was convoluted and crazy as all get out…including being able to attack neighbor’s towns, and even attack random player’s towns.  Which is exactly what the Gamers loved about it. But, I digress…

For me…the main problem was the mess of “Non-Canon” stuff that I had to deal with in my Springfield.  Yes. There was a short opening scene in the show…but it was self-referential…and certainly didn’t lay out where to put this stuff.

Me? I was kind of irritated.  It was a lot of weird stuff…that didn’t belong in a modern day Springfield.  But, I ended up placing it near the Stone Cutter’s Lodge (a truly great update) in the woods, outside of my regular Springfield, and near my Story Book Land.

Over the years…as we have had to deal with more and more random castle related stuff…bits and pieces of the Clash of Clans have ended up scattered all over the place.  I have tried to centralize most of this “from another era/place” stuff into one zone. But, the fact is…I’ve never really enjoyed it much.

I’ve seen some AMAZING designs and uses for this stuff by some of my neighbors. They are clearly more into the “middle ages of Springfield” than I am. But most of the great stone/wall/castle designs came using other updates…with far better walls, turrets, etc.  I mean…who wants a permanent cardboard castle? What if it rains? (which it does a lot during the winter in the REAL Springfield).

But, that’s what makes TSTO such a great game…there is no one way to play it!

Show Us what YOU have done with Your Castles.  Did you LIKE Clash of Clones?