Wow…what a surprise! Every time I do a “Designing In Downtime” post…it seems to bring on an UPDATE!!!  You guys can take up a fund to pay me for my wasted time on those…if only to thank me for shaming EA into regular updates.

So…it looks like we have a pattern. And the pattern is a bit boring. But, it is clear that this game is now all about the writers, and not about some new way that EA programmers can make the game interesting. Writing- good!  Gameplay-boring.

But, I have to say…that a piece of the dialogue really caught my attention, and rung a little too close to home this week. The whole issue of copyrights in the digital age is only going to get more complicated and muddy, and has created a whole new genre of “slime-buckets” in the world of litigation…the Copyright Troll.

I wish I could say that I have never had to deal with these vermin…but even as I write this, I am in a battle with a Troll and their slum-bucket lawyers, over something that ran for three days back in 2015, on a test post.  Gotta love it.

But, it is a clear warning to anyone in this digital age of “sharing” that you really do need to know the law…and be prepared to do battle with trolls, if you get caught “borrowing” an image, or a song, or a video.  “Sharing” is one thing…re-use is another…and KRUSTY may very well be headed into a TON of TROUBLE!

I can’t/won’t go into the details of this particular situation, in which I find myself battling toe-to-claw with the Trolls. But, suffice it to say, it may end up in with a lot of exposure, and a potential class-action suit against a couple of “free services” that are making the question of “who posted what/when,” very murky.

In the case of music (which is what Krusty is going to have to deal with), there are very clear parameters in copyright law in regard to using a copyrighted bit of music for commercial purposes. The whole world of “Sampling” (taking a bit of a recording, and re-using it on a new work) has been in the courts for decades, starting with loads of lawsuits from the Rap/HipHop/Dance/Trance music world.

The practice of taking “beat” (a sampled section of the rhythm section, and then repeating it as the basis of a new song, has gotten all sorts of people in trouble…and made James Brown one of the most sampled victims in music history. Good Gawd!

You can re-use a song…or re-do a version of a song…or a section of a song…as long as you give credit to the original composer, and register and pay a royalty percentage for all income derived from that song.  That is cool…fine…the right way to do it. Are you listening Krusty?

But, taking a riff, or lifting a piece of music, and NOT giving credit, can end up in court…decades after the fact. Ask Led Zeppelin how long they have been fighting over the “theft” of the basic guitar progressions from “Stairway to Heaven” from the band “Spirit” and their song, “Taurus.”

The boys from LZ, just won their case in appeals court in June, 2019.  At least for now, as the folks from Spirit still have the right to appeal the appeal in a higher court. The point here, is that the original song from Spirit, was from an album in 1968…and Stairway was released in 1971…and they have been fighting about it since. Do the math…That is almost FIFTY YEARS!!!

Krusty may be headed for a very long court battle if he isn’t careful. 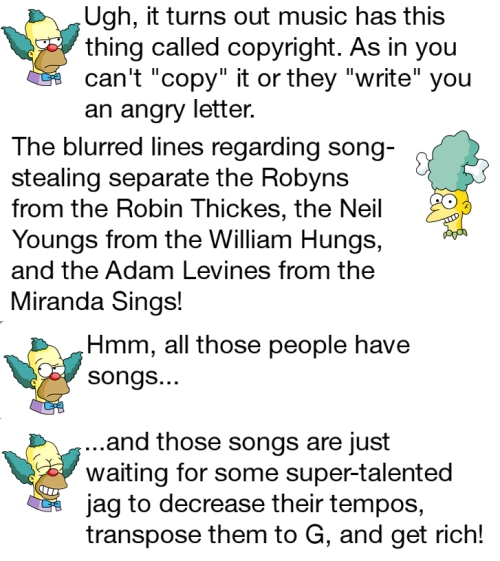 What is interesting, is that my case isn’t even out of the ordinary.

What is NEW in the copyright world, is a new kind of TROLL...who uses quasi/legal bot technology to search the ENTIRE internet (see article) through archive resources like Archive.Org (The Wayback Machine) to find “infringements” of un-licensed photos or graphics, that are copyrighted by their clients.  In most cases, these clients have pretty much gotten out of their primary line of work (photogrpahy, marketing, etc.) and have found that suing people. for use of an old image, is FAR more lucrative than the actual service they once provided.

There are a handful of slime-bucket lawyers who have made this their primary stock and trade, and basically use bullying, scare tactics, and the threat of “the full extent of damages allowed by copyright law” (which can go into tens, if not hundreds of thousands of dollars, including legal fees).  Most people just pay the exorbitant demand, just to make it go away.

While most legal/legitimate photo services charge an average of $20-$50 for the licensing of an image, these weasels begin by a “friendly offer” of between $3,500 and $5,000.” They are hoping to settle out of court, and quickly.

Where the world has gotten very, very, very murky, is with services like Archive.org…who take snapshots of posts, images, and servers, WITHOUT THE CONSENT OF THE ORIGINAL OWNER, and makes them available for search on the web through their site.

While this service is of value to some who are looking for something that got deleted from years past,  it presents a HUGE problem for people who remove information from secure servers in their control, only to find the information still archived, against their wishes.

Imagine the implications of a site who finds out that they have posted something incorrectly, or used an image of a minor child that a parent wants removed. They do so, in the best interests of the parental request…only to find out the Archive.Org still has the information available...against the wishes of the parent or the poster.  At this point, Archive.org becomes the actual “illegal poster” of the information, and NOT the party who removed it from their server, in an effort to comply with the parental wishes.

This becomes even more complicated with the rise of BOT/Image software, that can breach secure servers, to find information and posts from places like archive.org.

In my case…there were no children involved.  Only an image of a chicken dinner, that was used on a test page…in 2015.  So…yes…it’s going to get interesting. It’s past the 3 year statute of limitations, but apparently sat on Archive.Org’s servers until this very day…without my consent.

How weird ca it get? Case in point: Almost the ENTIRE site that I took down over three years ago, TSTOFriends.com, remains alive in some way (like the Walking Dead), on Archive.org.  Here’s a post from our First Year Anniversary.  Sooooo Weird to see it.

Look at the header. It’s not from our server…because that server no longer exists. It is coming from Archive.org’s server. It is “framing” the info, to make it appear as if it my old server.

This is nuts!  What if I had taken the site down for legal reasons…or a death in the family…or Ryan being upset because it was messing with his new life as a normal person??? Or I hated my original image, without my beard???

This is going to get ugly.  Lots of letters and documents are being filed.  And, yes…this could become national news.  I’ll keep you posted.

In the meantime…if Krusty knows what is good for him, he will stop taking advice from his former sideshow host!

OK. Back to grinding. Not in the game…but on Phase III of the remodel. KITCHEN!

Keep on tappin’…. or don’t keep on tappin’….but for the sake of everyone who knows you, don’t post a picture of fried chicken on a test server!  It Will NEVER Die!!!

***Disclaimer- This entire post, and all of its images are protected under copyright laws regarding “Editorial Use.”  So…bite me, Trolls!

16 responses to “Friday Filler – When is Copyright Actually Copywrong?”