Time for another fun and exciting event prize post!  This time around, more decorations…oh boy!  Act 1 consists of 3 new decorations, 1 Mystery Box Token, and 1 new character.  So at least we’ve got a character to balance out all those decorations…

So let’s take a look at the final Act 1 prize, Annika… 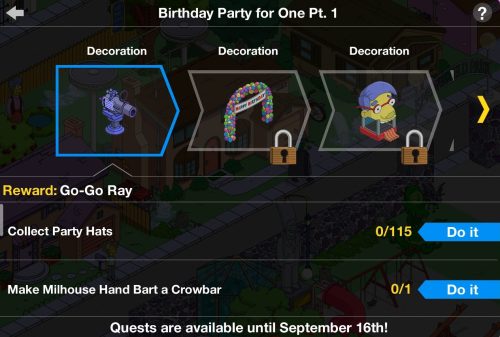 Annika is a  brand new character for Springfield and part of the Van Houtens Character Collection: 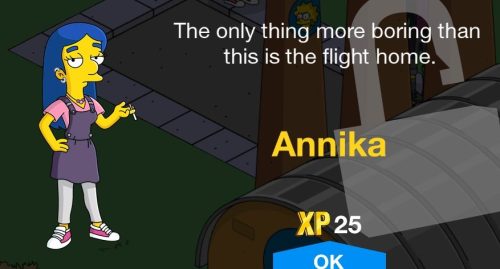 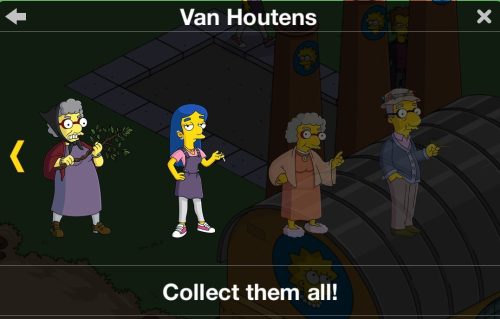 How You Unlock it:
Birthday Party for One Pt. 5
Make Milhouse Shout With Joy- 4hrs
Collect Party Hats- 4hrs, x195.

Annika does come with a full questline, here’s a look at that questline:

Annika: *sigh* Back in Springfield again. I don’t know if I’ll ever get used to that smell. Still, it is small and cute like Liechtenstein.
Sherri and Terri: Hi, I’m Sherri, and this is Terri. And this is our friend Janey.
Janey: Hi. Do you think we could hang out with you?
Annika: …
Sherri and Terri: You know, if you glare at us for long enough, it might actually count as hanging out with us.
Make Annika Condescendingly Stare at the Girls– 8hrs
Annika: I suppose you can hang out with me, as long as you are okay with doing my homework.
Janey: If that’s what it takes.
Annika: Also my laundry.
Sherri and Terri: We’d be honored!
Annika: Of course you would.

Annika: I’ve been here five minutes and I’m already an outcast. This will not do. You there, fat little American boy, how did you become the outcast you are today?
Ralph: Who, me? What’s an out cat?
Annika: Ugh, useless. What about you there?
Milhouse: Annika, it’s me Milhouse, your cousin, remember?
Annika: Yes, I am aware. Please don’t remind me. So, answer the question. How did you become an outcast?
Milhouse: I don’t know what you’re talking about. My mom says I’m very cool.
Nelson: Perhaps your mom will reconsider when she sees this. *pulls down Milhouse’s pants* Haw-haw!
Milhouse: Knowing my mom, she probably will.
Make Annika Mutter in Dutch- 8hrs
Annika: Nice hearts on your underwear, Milhouse. Did you pick those out yourself?
Milhouse: No, my mom did. She says even if I added up all these little hearts, it still wouldn’t come close to the size of my real one!
Annika: *sigh* Sometimes I don’t know how you and I are related.
Milhouse: You know, we’re not THAT closely related, if you follow my drift… *winks*
Annika: Thank you for interrupting my existential malaise with aggrieved rage.

Janey: Look! Annika is making fun of Milhouse.
Sherri and Terri: Wait, we’re confused. Don’t only cool kids make fun of Milhouse? Yeah, you’re right. Hmmm, I guess we need to rethink how cool Annika is. On the one hand, she’s into fidget spinners, which is not cool. On the other hand, she makes fun of Milhouse, which is.
Janey: I guess that makes her more cool than uncool. I’ll go tell her. As soon as Milhouse pulls up his pants and goes away. Hey, Annika. We saw you making fun of Milhouse, so we’ve decided you’re cool again. Uh…what are you doing?
Annika: I’m just playing spijkerpoepen. Wanna play?
Make Annika Play Spijkerpoepen- 4hrs
Janey: First Annika was cool, then uncool, then cool again. But now she’s playing some weird Dutch game, so is she uncool again?
Sherri and Terri: My heads are spinning.
Janey: Don’t you mean “our” heads are spinning?
Sherri and Terri: Stay out of this!

Sherri and Terri: Here comes Milhouse.
Janey: Keep walking, loser, can’t you see we’re playing spaykerpowpow?
Milhouse: It’s pronounced spijkerpoepen. And you’re only playing it because it makes you cool to be seen with Annika. Did you know it means “nail pooping”?
Sherri and Terri: Ewww, you’re gross.
Janey: Yeah. Why don’t you just leave us alone. Forever!
Annika: But he’s right.
Janey: When has that ever mattered?
Make Annika Feel Bad for Milhouse- 4hrs
Make Milhouse Cry- 4hrs
Annika: Thank you for coming to my defense. That was cool of you.
Janey: What!? You think Milhouse is cool? Gross.
Sherri and Terri: Double gross.
Janey: I knew giving you a second chance was a mistake! Let’s go, girls.
Milhouse: Don’t mind them, Annika.
Annika: I don’t care what they think.
Milhouse: Ya know, in some American states, it’s totally normal to date your cousin. Isn’t that interesting?
Annika: … Girls, wait for me!

And that’s it my friends, the details on Annika…

Up Next?  Well, I’ve covered the rest of the Act 1 prizes here.  Beyond that, nothing left to do but wait for Act 2 on Friday (starts at 11am).

Thoughts on Annika? Questline?  Tasks? Act 1? Sound off below.