It’s Halloween in our pocket-size Springfields!  Yes that magical time of the year when our towns turn dark, our water becomes mucky and there are monsters everywhere to battle.  Just like October in every other suburban town in America, no?

The Halloween Event is in full swing on our devices and it’s full of creepy decorations, buildings and characters…all designed to get us into the Halloween spirit!

is the Mad Doctor’s Castle, because of course Springfield needs another castle… 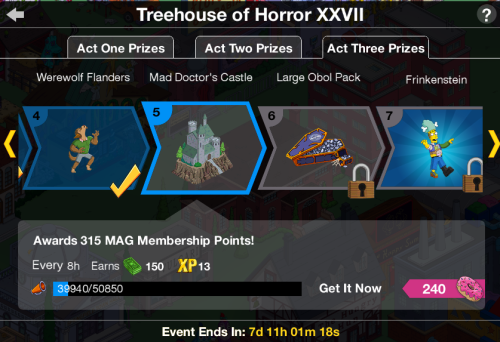 you’ll automatically be awarded the castle and you’ll see this message popup:

Mad Doctor’s Castle does not come with a questline (other than the initial one telling you to unlock it).  Nothing to help you earn more

…just unlock the prize and move on.  It does however come with a little bit of dialogue:

Frinkenstein: Finally, I’ve found a place to hang my hat. Although, I don’t wear a hat.  They don’t fit my odd-shaped head.  Which only makes my need for a hat that much greater.  Another of life’s great mysteries, like why won’t the lady barista make eye contact with me?

Here are some quick facts about the Castle:

And there you have it, the details behind the Mad Doctor’s Castle, the fifth Halloween Act 3 prize!

, but that’s not a tangible prize for your Springfield.  it’s just some additional crafting currency.  So the next price we’ll cover in the rundown post is the…

.  This will be the next prize we breakdown in the prize guide post.

So that my friends is the full breakdown of the Fifth (and sixth) Act 3 prize!

What do you think of the Mad Doctor’s Castle? Have you unlocked it yet? Where have you placed it?  Sound off in the comments below, you know we love hearing from you!