Should I Spend Donuts On the Great Wall?

Chinese New Year is nearly upon us and the Simpsons are all about celebrating to earn a clean slate for the new year! So let’s clean house and pile up those donuts because there’s a store full of new Chinese New Year themed premium items just tempting us to spend sprinkles on them!

Of course with that limited-time label it can be tempting to buy everything that looks as awesome as this because it’ll be gone soon.  But don’t sweat it!  That’s where we come in to tell you what’s worth those donuts and what you might want to hold off on.

Ok, so I’m just going to say this now…the jokes about the wall that many of you expressed yesterday are now done.  Yes, it’s funny because of what’s happening…but it is only funny so many times.  So let’s all move on from the wall jokes and discuss whether or not you’re adding it to your Springfield and now… Thanks!

How it Works: The MAIN tower (one with the Red Chinese Flag

) is where you can generate more wall sections and Towers. (currently I don’t see a cap but I’ll to do more digging) Simply tap on it to construct more parts…similar to Squidport: 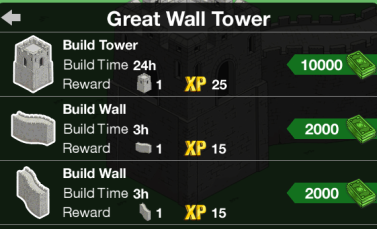 Cons
-The bonus % offered for donuts spent isn’t that great.
-Walls are large and can be awkward to place
-You need to construct various towers to make turns with the wall

Final Thought
Premium:
Meh. Initially I thought this was hilarious (especially based on its release day) but as I played around with it & saw a ton of feedback from y’all about it (wishing you could take back your purchase) I’m having second thoughts on it.  It’s funny & if you have a use for it..great.  Go ahead and grab it.  But I wouldn’t buy it because it’s funny.  If you truly have no use for it, pass.  The bonus % isn’t great and it’ll take up a ton of space in Springfield…plus it’s really awkward to place.

Of course in the end it’s your decision, we can only tell you what we would or wouldn’t do.  And I can tell you as a premium player, I’m leaning on passing on it in my main game.  I liked the idea of it but it is really awkward to place.  Just remember this is limited time , and will be leaving our stores next week. So be sure to make your final decision before it’s gone from our games for good. (or for now..)

What are your thoughts on the Great Wall?  Will you be picking it up or have you already?  Where have you placed it in your Springfield? Sound off in the comments below, you know we love hearing from you!

53 responses to “Should I Spend Donuts On the Great Wall?”