Raise the Jolly Roger as the Time Travel Toaster has flashed us into the Pirate  Era!  We’ve got roaming Rats (ugh..), Animatronic Pirates, Ghostly Ships and lots of Booty (apparently TSTO is trying to keep up with the Kardashians)!

You can tell EA is trying to do a few things different with this event…for starters the overall event is a week shorter and there are more prize elements, but it’s really the Excavation Site that people are digging…see what I did there?

The Excavation Game has Tappers everywhere talking…about the best strategy, how many moves they can find the Gem in and apparently it’s become almost as addicting as this site !;)

So let’s breakdown the details of the Excavation Site changes that rolled in with the Pirate Era…. 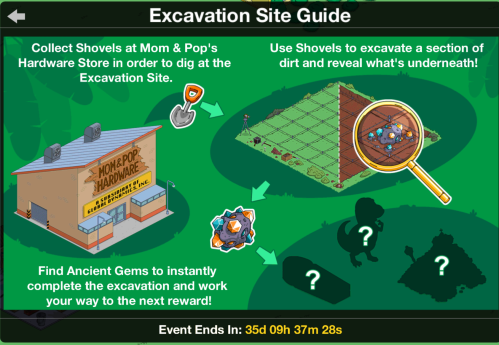 As a reminder we broke down, in great detail, the how tos of the Excavation Site during the Prehistoric Era here. Not much has changed for the Pirate Era, except instead of Papyri or Fossils now it pays out Eye Patches and the prizes have changed.

There are 5 total prizes….

And here are the quick details for each…..

Other Info: Can be placed on grass|dirt|beach.

Krusty: Now THAT’S what  call a big booty! Anyone…?  I like a big chest, but this is ridiculous! BECAUSE YOU DIDN’T LAUGH NOW I GOTTA FIRE MY WRITERS.  AND ONE OF THEM JUST BOUGHT A HOUSE.

Other Info: Can be placed grass|dirt|beach|pavement.

Other Info: Can be placed on grass|pavement|boardwalk|pier|dirt|beach.

Other Info: Can be placed on grass|pavement|boardwalk|pier|dirt|beach.

Other Info: Can be placed on grass|pavement|boardwalk|pier|dirt|beach|over river|over road|over cobblestone.  Can be placed OVER water.  Really neat.  Simply build a river and it’ll span over it…

And that’s it my friends!  The details behind the Pirate Era changes to the Excavation site!

Thoughts on the Pirate Era changes to the Excavation Site?  Thoughts on the prizes?  How far along are you?  Sound off in the comments below, you know we love hearing from you!