RVPD – You Can Make it “Pirate Day” Every Day! 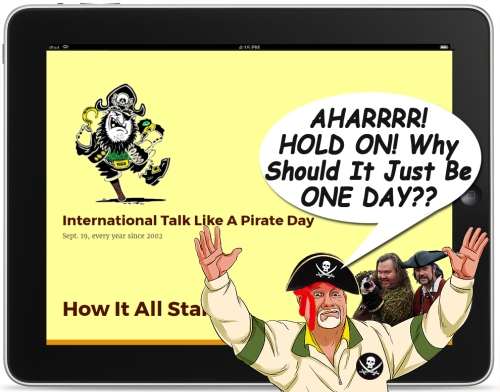 I have to admit that I had completely forgotten that “International Talk Like a Pirate Day” actually started just 45 miles away from me.  Two guys in Albany, Oregon started the annual event, mostly as a lark, until columnist Dave Berry got hold of it, and blew it up, big time in 2002.

It was in his column that the concept of spending an entire day, talking like a pirate, got “sea legs” and really took sail.  The story is actually pretty hilarious…even the “how did you choose the date?” part…that ends up revolving around one of the “founder’s” ex-wives.

You can visit the official site HERE.

Not surprisingly, the British got into it (after all, most of the best Pirates were actually British), but their site(s) — are confusing, and seem to center on a Pirate names “Mad Cap’n Tom” who has none of the gravitas or “real Pirate” vibe that a Blackbeard, or Captain Kidd, or Sir Francis Drake have.  And yes…ironically, Drake was a pirate before he became a “sir” for taking apart the Spanish armada, one ship at a time.

I know a lot about pirates. I was obsessed with pirates when I was young, (before I decided I would rather be a World War One fighter ace).  But, when the National Talk Like a Pirate Day first surfaced, my love of Pirate lingo returned quickly.

But…I have to admit, my first attempts were not well received…and almost got me fired.

The year was 1996. I had been hired to consult and program a local radio station. One morning, while doing an air shift for a morning jock who had called in sick, a listener called in to tell me that it was “Talk Like a Pirate Day.”  It was early…like 5:30 AM early…so I figured, “why not?”  After a brief pre-amble about the concept, I did every break during the next couple of hours of the show, with a Pirate accent…including the news, the weather, and all of the back-announcing on the songs.

“Aharrrrrr….now that was a mighty fine tune there by young Mr. Dylan…but no sir…you don’t want to be rollin’ a stone around the deck…or ye might end up overboard in the drink!” Or something like, “The weather seems fair enough, with a light winsome breeze comin’ in off o’ the coast.  A perfect day for a full sail and a bit o’ grog!  But watch for red skies in the mornin’ tomorreee…you may need to cut the mizzen and batten the hatches!”

I was killing it.

Until the station owner heard me on his way into the office at 8:30.

He stormed the office like a banshee wind…and after ignoring my explanation…made it clear that “Talk Like a Pirate Day” had no place on his “Adult Album Rock” station. Fine. Whatever. Maybe it was that I had tied my sweater around my head to emulate a Pirate scarf…who can tell?

It has always bothered me. And even after years of national and international exposure, “Talk Like a Pirate Day” doesn’t get the kind of respect it deserves.

Which is why I have invented a new way to Talk Like a Pirate every day of the year.

In this PC day and age, almost every condition known to man, now has a clinical name, and is protected under employment laws.  You HAVE to allow people all sorts of leeway, especially when they have special “medical clearance” to back them up.  When we have now determined that there are both Gluten Intolerance, Non-Celiac Wheat Sensitivity, and the seemingly almost deadly combination of Lactose -Gluten – Shellfish Allergies…(ALL making it next to impossible to plan a Wedding Menu), it just seems that a little tolerance to talking like a Pirate is in order.

But, to ASSURE that Pirate Talking gets its due respect, it is important to take this far beyond talking like a pirate for a single day.  No…I am NOT advocating talking like a Pirate all of the time (like it seems Johnny Depp has begun to do).  What I am talking about, is slipping into “pirate mode” randomly…and in ways that make it difficult to discern, unless the listener is really paying attention.

The new condition is, “RVPD.” And no…this has nothing to do with pretending to be “the law” at a motor home park.  RVPD, stands for Random Verbal Pirate Disorder.  The key to this condition is that it is only “verbal” (there will be no swashbuckling allowed), and is completely random…as in almost impossible to detect or deride.

An example of a “Random Verbal” outburst, would be simply elongating the occasional word, with an ARRRRRR!! As in,” I heard a funny sound coming from the engine of the Carrrrrrrrrrrrrrrrrrrr…maybe I should take it in to have it looked at.”  When your wife stares at you with that “what did I just hear?” look on her face, you simply look back as if nothing unusual happened.

If you really want to commit to the concept…try doing this during a presentation at work…or when ordering coffee at the Starbucks…and when you hit the “Pirate accent” hold one hand over your eye, emulating an eye patch, but then continue as if nothing odd was happening.

You get the idea.

The best part of this, is that after only a few hundred times, it will become almost automatic, and you won’t even have to think about it. You’ll simply randomly elongate words with a Pirate accent, while briefly covering your eye, and then continuing as if nothing odd has happened at all.

The downside of this, is that if you actually get to the point where this is engrained into your daily habits, you may in fact be diagnosed with another condition, that may be more severe than simple RVPD. But, those are the chances you must take to really enjoy the benefits of messing with people’s heads.  Sometimes the heads you mess with are your own!