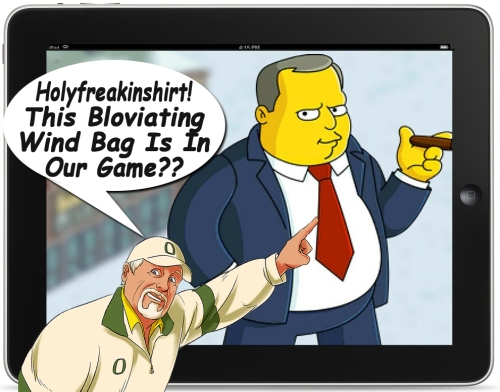 OK. So, clearly this is a loaded topic for every Tapper, of every political persuasion. So…I’m NOT going to go into the politics of this Mini Update…at all.

We, as a nation and a culture, are way, way, way, too far down the road to put the genie back in the bottle.  From a world dominated now by cable news networks, myriad “news” outlets, and a seemingly infinite number of Internet-based “news/opinion/editorial” outlets proffering untold versions of the same stories with their own slants, the genie that was the Fairness Doctrine was uncorked, and allowed to run rampant without restrictions.

As someone who has worked in media/broadcasting and political communications for the better part of my entire adult life, I can actually remember a time BEFORE things got out of whack, and the green light was given to the Birch Barlows of the world.

How long ago was that?

If you can believe it…the “Birth of Birch” was actually fertilized in 1987…way before many of you readers were even born.

Before killing the Fairness Doctrine during the Reagan administration, all public news agencies, whether they be print, broadcast or otherwise, were tasked with presenting “Fair and Balanced” coverage of issues that affected the good of the public. This was actually coupled with the FCC’s “Equal Time Rule,” which mandated that any political candidate given time on a media outlet regulated by the FCC, had to give EQUAL TIME to the opposing candidate.

Can you even imagine this in the current political climate?  The thought of “Equal Twitter Time” alone, boggles the mind…and would cause smart-phones to implode.

The second leading factor in the proliferation of Political Blathering as a huge business, came during the Clinton administration, with the deregulation of Broadcast ownership, in 1996. This gave rise to huge conglomerate ownership of multiple Radio/TV broadcast companies, and now Newspaper ownership, that allowed Cable TV and Talk radio to emanate from a single studio, but be broadcast by satellite to thousands of outlets simultaneously. Birch was now everywhere…along with a plethora of other branches, including some that were/are downright thorny.

As I said…I am NOT going into politics in this post. And as Alissa stated, we aren’t going to allow partisan comments of any type to escape moderation.

But, I will offer my personal opinion of the de-evolution of the political system that has come about by this explosion of sources for rhetorical bloviation…

It has made us all divided…and lazy.

For the most part, people have stopped actually vetting sources, and now only look to the latest headline, Facebook expose, or salacious rumor. Facts have been replaced by “truthiness,” with the result being an electorate who votes by sheeple consensus, without taking the time to work through the actual ramifications of their actions (or lack thereof).

The amazing thing about this silly lil’ update, is that it points out the real problem with politics and the electoral process; rather than coming up with solutions, we are simply acting as “fans of our team,” right or wrong.

Birch is just an entertainer.  I have met, and interviewed the “real Birch,” and can categorically state, that he doesn’t actually believe even half of what he says on the air.  It’s just good for ratings…and he knows his audience.

And as it has turned out, some of the “Birches” from both sides of the political dial, have been toppled, because as it turns out, they are pretty awful people in real life.

That said…there are countless “Birches” and “Sons-of-Birches” that have carried on the Birch Tradition, and now occupy the bulk of the airwaves, while trying to fill 24-hour news cycles with “headlines that grab.” If you have to fill 24 hours (when the news used to be a “Evening News” and “Morning Paper” thing), you have to WORK at exploiting every angle, and blowing things out of proportion.

The result is exactly what we have coming to us, for be so lazy as to hand over our right to the truth, to people who consider “truth” to be malleable and profitable.   We are living the result of throwing away true fairness, without making politicians actually WORK toward solutions that serve the common good of ALL of us.

Good for EA/Gracie, and everyone who has the courage to make fun of both parties…and ALL of the talking heads. That is an effort I can support.

Freedom Likers?  Pfffffttttt… Real freedom comes from honest, fair, and open discussion. We all want freedom. All of us.  But, too much freedom at the expense of honesty and integrity is a bad thing.

That’s it. Peace out. Go back to tapping.