Abes In Toyland Event – Calendar and Math to Get It All! 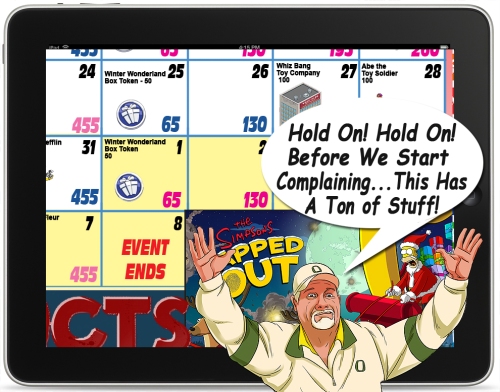 Let’s remind ourselves that Alissa has placed a moratorium upon complaining about this event.  I get it. She loves Christmas, and is going to be upbeat and happy about anything we get for the holidays.

That said, I honestly have to admit that there isn’t much to complain about here…so it makes the job pretty easy.

This event is LOADED with prizes. There is simply no denying that.

Let’s dive into some of the stuff…and what it’s going to take to get it all!

But, before we do…let’s just admit that the current condition of the world in which we live, is pretty divided. OK…make that very divided.  There doesn’t seem to be a lot of compromise.  Everything is black and white, with no room for gray.

Well…I’m going to attempt a little gray (not white, like the color of my hair).

First…we got a TON of stuff… FOR FREE New Characters. FOUR!  Are they a bit random? Sure. But we are 7+ years into the game…with hundreds of characters already wandering our town. Pulling a few randos is going to happen.

Second…we “long time players” didn’t get a thumb in the eye this time with a bunch of retread stuff. There are no “Or 12 donuts” on this calendar.  None. All new stuff. Yes, it is a tad repetitive…but it’s new. All new.

Third…It’s very easy to win…and leaves us plenty of time to spend with friends and family, without sneaking off to the bathroom to tap. And I do mean our games…nothing else.

No. They didn’t increase the item limits…which means those of us at the tippy top of the limits are going to have to figure out what to store, so we can place all of the wonderful things we have won.

Yes. There seems to be an exorbitant number of “Winter Wonderland” tokens (8). But they are good to get a long list of returning content…most of which are buildings with characters.  EIGHT Tokens is cool!  But, I only have 6 things in my Winter Wonderland Mystery Box. And I am guessing that a ton of folks who buy most everything, are going to have even less than me. So…maybe another whiff by EA. We’ll see.

In any case… here is the calendar. It was really EAsy to do this time…because it is the exact same math, and rollout pattern as the event in August. Imagine that. EA repeating themselves again. And, because they put so little thought into the programming part of this event, I am only doing one calendar.

It’s EAsy. Tap each day…you’ll get it all. 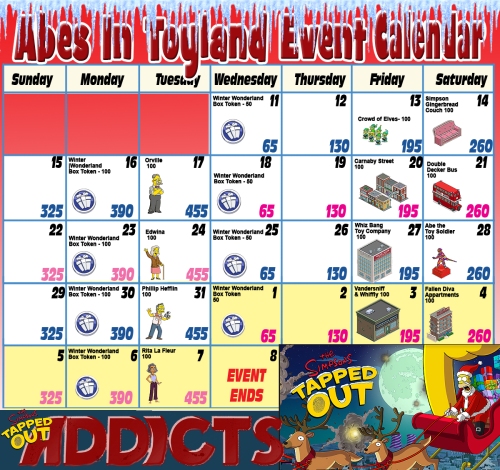 51 responses to “Abes In Toyland Event – Calendar and Math to Get It All!”