Christmas still continues in our pocket-sized towns!  By now the snow is starting to get old, and the residents of Springfield are starting to debating when to take their Christmas trees to the curb.  But alas…the story continues in TSTO…

Abe’s in Toyland follows the same event structure of the Multi-Events before it.  This event consists of 4 parts (or Acts), with each part lasting a week and taking us through a new part of the event!

For Week 3 Act 3, we’re following the third, Grampa Saves Christmas, story…a tale about how he saved America from a communist Toy Company!  All of the prizes unlocked during week 3 play a role in that storyline. 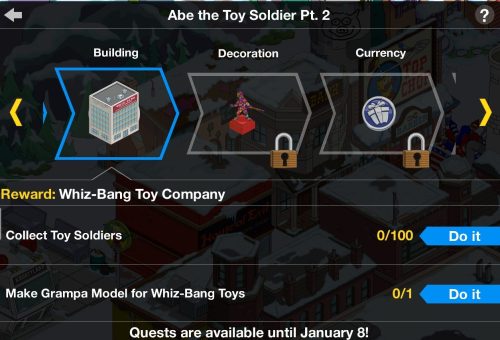 Note: Prizes 1 and 4 are Mystery Box Tokens for the Winter Wonderland Box.  I’ve detailed how these work in this post.

Other Details:
Item: Whiz-Bang Toy Company
Size: 6×7
Build Time: 4hrs
Earns: $300, 30xp/24hrs
Conform-O-Meter: Consumerism +10
Can Be Placed: grass|pavement|boardwalk|pier|dirt
What Does it Do?: Animated when in use
Permanent Task: CBG…Protest Recent Toy Designs, 4hrs
WDTCF: “Mad About the Toy” S30, E11

Next up, prize 3, Abe’s Rainbow Statue…

Once achieved you’ll unlock the statue…

Other Details:
Item: Abe’s Rainbow Statue
Size: 2×2
Earns: Nothing,, just a decoration
Conform-O-Meter: Vanity +100
Can Be Placed: grass|pavement|boardwalk|pier|dirt
What Does it Do?: Nothing.  It’s just a statue.
WDTCF: “Mad About the Toy” S30, E11

And that’s it my friends, the details on Whiz Bang Toy Company and Abe’s Rainbow Statue…prizes two and three on the Abe’s in Toyland Act 3 prize track!