Update time in Springfield!  We’re all getting antsy sitting at home, so it’s nice to have an update to focus on!  And highly amusing that it’s based on wrestling, when this may be how some of us are treating our families after a few months of quarantine!  😳

Anyway…what’s in store for us this time?  Well, it’s time for Burns and Aristotle Amadopolis to have yet another clash of tapping proportions! Loads of dialogue with this one, so be sure to read along to see what happens! And of course, I’ll be posting it as each week wraps up…

Once again we see another multi-event in Springfield.  So love them, or hate them, they’re still here.  So let’s all try to make the best of this…

Anywho….things kick off with 4hr tasks for Burns and Bart.  Note it’s FOUR hours, not the usual 6s. 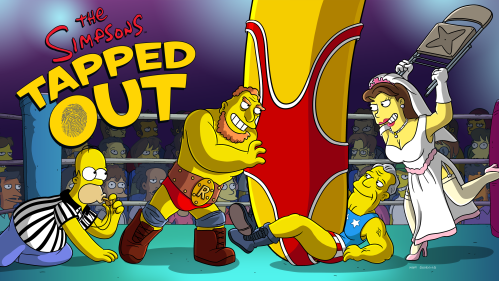 First, remember this was an app store update available for download yesterday (Tuesday 4/7).  So if you haven’t already done so, and you don’t see the Splash Screen above for your game, head to your app store and update TSTO.  You may have to search the store for Tapped Out, as it doesn’t always appear on the update list initially… 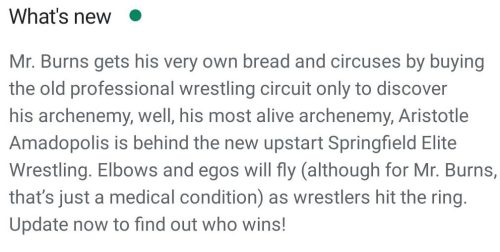 Curious on what this event will be focused on?  Well, here’s the event overview from EA:

Mr. Burns has purchased World Class Wrestling and is making the wrestlers do things his way. But things take a turn when Springfield goes crazy for hipper, more extreme wrestlers — who soon have the run of the whole town!

Follow along as the fate of Springfield comes down to a battle royal between Burns’ old school wrestlers and the new crew backed by Burns’ arch-rival, Aristotle Amadopolis! Can even Bart’s wrestling hero, Dr. Bonebreak, save the day? 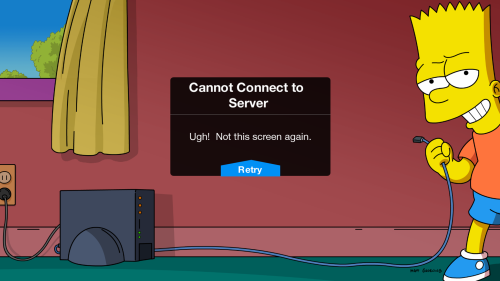 Seeing reports of Bart Screen of Death and/or password lockouts.

And don’t panic.  There’s plenty of time for this event, and the goals aren’t insanely high.

Now on with the update… 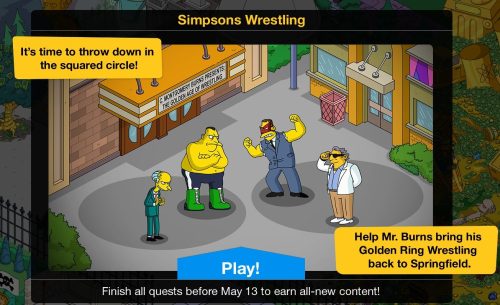 We should all know by now unless of course, you’re new to TSTO that the prizes for this event follow the same questline format to unlock as our regular mini-events do.

Just like every large event recently, this is not your typical Major Event.  And there are pros and cons to that, and everyone will find their own pros and cons.  And some people’s pro will be someone else’s con.

As always, I just ask that you have an open mind, and reserve judgment until we’re into the event.  It’s 5 weeks long, it should be fairly easy to complete, you’ll unlock a bunch of new prizes, no crafting to grind through, and we’re all going crazy at home so let’s just have some good old fashioned TSTO fun!
And, as long as you don’t rush things, you won’t get bored because it’ll change each week!

As I stated above, the initial quests are 4hr tasks .   Once completed you’ll start the Enter the Golden Ring questline, which is the Act 1 story to follow.  This is how you’ll unlock the Act 1 prizes.

Mr. Burns: What a sad little imp.  I hope the sadness is from something I did.
Bart: I wish.  This is worse than anything you could do.
Mr. Burns: You insult me.
Bart: World Class Wrestling has gone bankrupt!
Mr. Burns: Smithers, I smell something delicious.
Smithers: I did mix your Bengay with VapoRub.
Mr. Burns: No, I smell opportunity!  Purchase this wrestling company at once.
Make Mr. Burns Purchase the Wrestling Company- 4hrs, Earns $175, 45xp
Make Bart Celebrate that Wrestling is Back- 4hrs, Earns $175, 45xp
Mr. Burns: Hence-here-for-after-forward World Class Wrestling shall be known as… Golden Ring Wrestling!  In honor of the rings I’ve taken from my adversaries’ gravesites.
Smithers: Sir, that seems very wrong.
Mr. Burns: Shut up and have a golden ring!

And this triggers the entire story premise for each act…

(and yes, just like I did for the past multi-events, I’ll be posting full dialogue for this one before each week is over)

And here’s the Act 1 Synopsis:

Mr. Burns buys World Class Wrestling after it goes bankrupt and makes it focus on his golden oldies wrestlers, rebranding it Golden Ring Wrestling. While initially popular, Burns soon squanders that popularity by having his wrestlers do embarrassing advertising for his business interests. Aristotle Amadopolis’ new Springfield Elite Wrestling rolls into town, led by Iron Yuppie, and is immediately cooler than Burns’ Golden Ring Wrestling. To try to win the public back to his wrestlers, Burns makes a deal with Amadopolis: they’ll stage a unification Super Slam bout that Burns’ wrestler will win – in return, Burns will give his rival a prized gold statue of Glamorous Godfrey. 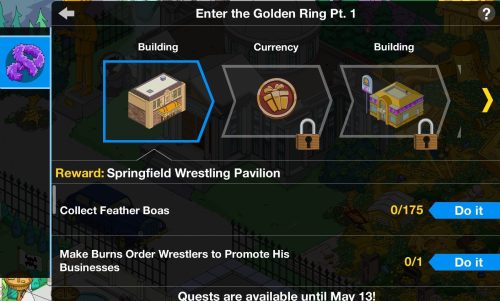 DO NOT FORGET TO SCROLL UP AND DOWN IN THE TASK BOXES (PICTURED ABOVE) TO BE SURE TO COMPLETE ALL TASKS FOR EACH PART.

I’ll lay out specifically what you need to do for each part in the turbo tappin’ post, but I don’t want any of you to get messed up with this.  So don’t forget to SCROLL!

Here are the prizes for Part 1:

Springfield Center for the Performing Arts (Building) Enter the Golden Ring Pt. 1 and 175

Questline, which I’ll post later, will show how each is unlocked.

Each Act will have a new premium character that will earn event currency.  From what I can see, based on the info from EA, characters will be used throughout the entire event.  So Act 1 will be used in Act 2, 3, and 4…etc.

The Daily Challenges have NOT converted over to event currency.  They remain exactly as they’ve been prior to this event launching.  Cash, SH Currency and Donuts.

Waiting to see if they’ve been upped.  I’m not at the max so I can’t check…feedback would be great 🙂

And that’s it my friends.  The details of Act 1 of the Simpsons Wrestling Event!

Your thoughts on the event?  Thoughts on the content?  Excited to see the storyline? Sound off below, you know we love hearing from you!

This entry was posted in Game News, spoilers, Updates and tagged EA TSTO Spoilers, Enter the golden ring prizes, how do i get captain flag, How do i get Professor Werner von Brawn, how do i get springfield center for performing arts, how do i get the wrestlers dressing room, how do i get tofu bell, How do I get University of Heidelberg, Mystery Box Tokens, Next Event in TSTO, Simpsons wrestling act 1, Tapped Out Tips and Tricks, Tapped Out Wrestling Event, The Simpsons Tapped Out, TSTO Addicts, TSTO Next Event, TSTO spoilers, TSTO Tips and Tricks, TSTO Wrestling, What will the next event be focused on in TSTO?, whats in the wrestling mystery box, When will the next event start in TSTO, who earns boas. Bookmark the permalink.

66 responses to “Simpsons Wrestling Week 1 Is Live! (Updated and Complete)”