Friday Filler – Why Do You Still Play the Game? 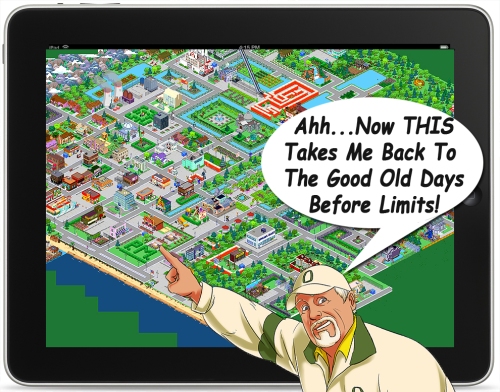 I have to admit, I was happy, and a little heart-broken when Alissa sent me a text message late Tuesday night. It read, “An update was released. You’ll have to let me know if they upped item limits.”

I affectionately call Alissa a “Bliss Ninny” as she always wants to believe that EA is going to listen to us, and TSTO is going  to return to its former glory. I love her for that. We need bliss-ninnies in the world right now. It’s no wonder that Disneyland (either coast) is her favorite place to be.  I can see her teaching Riley and Sammy that if they “clap loud enough” they can save Tinkerbell and the rest of the fairies.

But, unfortunately, I had to be the bearer of bad news, with a simple reply of “Nope.”

It’s been almost a year and a half since the last time EA upped the Item Limits by even a handful.  And yes…it sucks.  And yes…it greatly impedes my “joy of designing.”

Like so many things in life when you get older, you find that certain aspects of your life become markers for other things in your life. And the growth of my town…is almost like one those pencil marks on the wall you make for your kids’ heights. They mark the basics…but not the actual events that make them special.

That isn’t the case with my Full Town Snapshots.  I started capturing them back in 2013, when I started seeing the need to share my handiwork with readers. And unfortunately, now the same kind of effort shows how little I have been able to do since EA stopped upping the Item limits.

“Back in the Day,” the only way to do a full town screen shot, was to capture loads of loads of individual screenshots, then trying to use an app called “Stitcher” (which always had weird results) or piecing it together by hand with PhotoShop (which took hours and hours to get just right).  But, I did the latter a handful of times…until EA gave us the amazingly handy “Town Portrait” tool, which allows you to easily capture your entire town (in a slightly grainy, pixelated manner).

Looking at some screen shots, I realized just how far we had come…and why designing in my town was the main reason I played.  It also made it very clear when Item Limits became a true hindrance. And admittedly…if I am to be honest…coincided with when I started Donut Farming. I’ll get to that in a minute…along with my new resolution for game play.

First…a Full Town rendering (created from a gazzilion screen grabs and Photoshop) from 11-14-13.  (click to enlarge any photos) 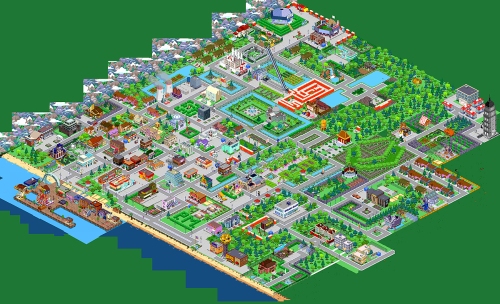 If I look at that same rough segment of my current Snapshot, very little has changed. 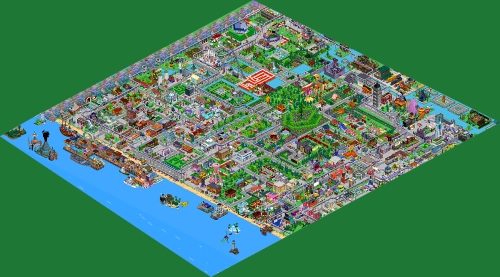 Yes…the boardwalk, harbor, and a ton of Monorails have appeared…but the core of my original town still remains intact.

Now…if you take a look at the screenshot I did of this week, you’ll see some marked differences in design density.  (again…click to enlarge) 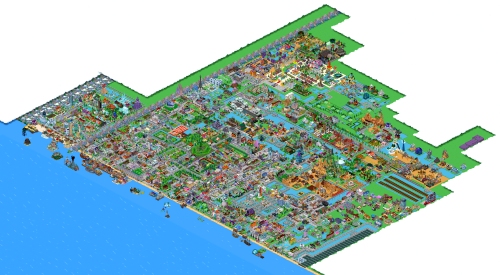 So..yes..the first thing to realize, is that I still have a ton of unused/un-purchased land. But, because of the Item Limits, there is really no need to buy more land. I can’t really do much with it anyway.

But, because I was finally convinced to Donut Farm, (because of Safi’s Post on how to do so in moderation), I began to be more and more obsessed with Bonus % Multipliers…and succumbed to the knee jerk reaction created when EA would mess something up and offer something with a TON of bonus, for super low prices.  This created a very LARGE area of tennis courts, as well as a ton of Wailing Walls…simply to Boost My Bonus % up to around 1500%. 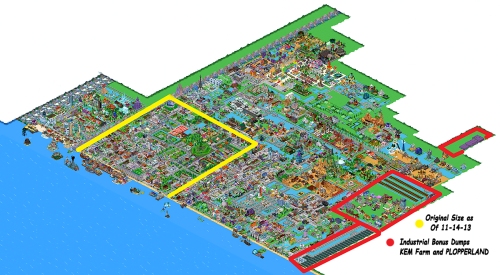 This has created a gigantic segment of my town, that is almost entirely the result of my chasing Bonus %…but at the cost of being able to actually DO anything with what I “win” in the event updates.

All of the areas in Red are simply a new version of “Plopperland” or some aspect of Bonus % increase items…or Donut Farming. 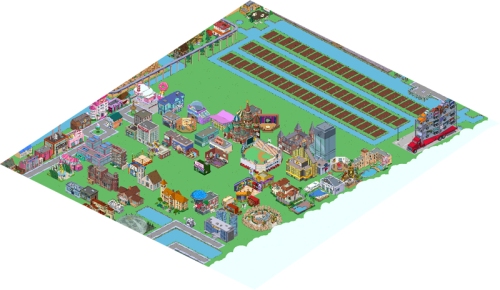 Plopperland is a complete embarrassment for someone like me, who loves to design.  I stored tons of clutter…and kept just buildings and decorations that I “might want to get around to designing” for when they INCREASED THE ITEM LIMITS.  Which I now realize they are never going to do.

And no…I don’t want to hear from a bunch of you telling me how you can “hide your bonus % increase items.  I’ve done that. I have TONS of stuff hidden…but, it’s pretty damn hard to hide 100 wailing walls, and who knows how many tennis courts. And that also defeats the purpose of Freeing Up Item Options with the Item Limit Cap.

So…….I am left with a decision. One that I came to pretty easily, once I stopped playing the game regularly.  And here it is…

TURN BACK TIME...to a time when you could design how you wanted to design…with loads of trees, and decorations, and roads, and things that made your town look REAL!

I want to return to a time of “design density.”

That’s right.  I’m going to store all of the tennis courts, and wailing walls, and take my lumps with how it changes my Bonus %.  I don’t care anymore!

What good is it being able to farm a ton of donuts…if you can’t place and decorate what you BUY with those donuts.  I’m going back to the good old days of grinding…and decorating..and using land and trees and water…and just farming enough donuts to keep me interested.

BOOM!!!!!!!!  A mini-nuke, without destroying the designs I have come to love.
TAKE THAT, BOB!

I’ll keep you posted on how this turns out…and share some of my new designs. Who knows? I might actually start enjoying the game again!

37 responses to “Friday Filler – Why Do You Still Play the Game?”